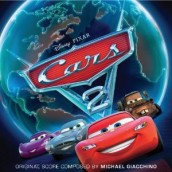 Though not  nearly as well reviewed a Pixar film as UP, but a whole lot of fun to listen to in any case, is CARS 2. Where Randy Newman’s more straight-laced approach was more fitting for the original’s desert-bound setting of Radiator Springs, Giacchino’s now taken over the driver’s seat with a considerable shot of adrenalin for this commercially flashy, globe-hopping sequel.

Fans of Giacchino’s spy stylings for THE INCREDIBLES, ALIAS and MISSION IMPOSSIBLE 3 (not to mention his ultra-help sore for SPEED RACER) will be happy with the oodles of hip 007 / Derek Flint / Austin Powers action that rambunctiously fuels these human-faced vehicles. 60’s ready fuzz guitars, organs and a thundering orchestra drive much of the score’s energy, which doesn’t abate even when its Mater’s hayseed fiddles doing the laps. Giacchino’s got another strong theme to go on here, and never forgets to use it with every brash turn.

Then again, CARS 2 isn’t meant to be a score of delicate subtlety, but a musical thrill ride for franchise-juiced tykes. And with that goal firmly in mind, Giacchino flies through the finish line in roaringly assured, checkered flag-waving style.

Click on link: To buy the CARS 2 original soundtrack