In A&E’s new scripted action drama series BREAKOUT KINGS, airing Sundays at 10 PM, two United States Marshals, played by Laz Alonso and Domenick Lombardozzi, enlist/coerce the aid of three convicts (Jimmi Simpson, Malcolm Goodwin, Serinda Ryan) in recapturing prison escapees. Matt Olmstead and Rick Santora, who worked as a team for four years on PRISON BREAK, are the creators/executive producers of BREAKOUT KINGS and talk to us about why they are returning to jail with their storytelling.

ASSIGNMENT X: What is the genesis of BREAKOUT KINGS?

MATT OLMSTEAD: For me on PRISON BREAK, probably year two or three, Santora comes up to me and says, “What about a show called BREAKOUT KINGS? Catch the baddest of the bad or whatever.” “Cool, but we’re up to our eyeballs on PRISON BREAK.” So we went away – we now are done with PRISON BREAK, we’re in our development year, so to speak, with Fox, he brings up this idea again.

NICK SANTORA: It came together quickly. We had worked together on PRISON BREAK every single episode for four years, and then in our development year, when we each had a year left in our contract [at Fox], we both wound up coincidentally being assigned to help out on LIE TO ME [while Shawn Ryan was show runner there], so while we we’re working on that show, we’d spent half a decade together. I don’t like anything about Matt, really anything [both laugh], but we were able to stand each other enough to work together, so we thought working together again would be fun.

AX: To clarify something that has been discussed in the press already, did you and Fox Television just come to a parting of the ways on BREAKOUT KINGS and then you took it to A&E?

SANTORA: Yeah, they decided not to pick it up, which is obviously their prerogative. We were disappointed, but things happen for a reason and Matt and I looked at it this way. They had a four-year run with PRISON BREAK, so Fox was very good to me, Fox was very good to Matt. [A&E is] just a new home. We’ve found a home that’s really excited about the show, and they’re promoting it and they’re behind it and they’re excited about it, so we’re thrilled.

AX: Did you guys ever have a moment of thinking, “Do we really want to go from PRISON BREAK to BREAKOUT KINGS?” or did you feel that LIE TO ME was enough of a hiatus from jail that you were okay going back to prison-themed subject matter?

OLMSTEAD: I think that I never even equated the two. They’re such different shows. If Nick had come to me and said, “How about let’s work on a show that involves prison life?” I would’ve been [makes uncertain noise], but it never occurred to me [they were] similar, because [BREAKOUT KINGS] is what happens post-escape and the whole thing was different to me.

SANTORA: The show is all about the characters. The device of [prisoners] breaking out and chasing these guys is exciting, it’s fun, all that stuff happens, but it’s just our vehicle to learn about these people. A straight procedural show, and they’re out there and some of them are wonderful and they do very well, this isn’t a criticism, but a straight procedural show is not something that Matt and I would ever want to write, either together or separately. It’s just not that exciting for us.

AX: And do the U.S. marshals all have different opinions about the convicts? I mean, is one happy about it and one thinks this is the worst idea ever and on is on the fence?

SANTORA: One is Julianne [played by Brooke Nevin], who’s kind of a hybrid who falls in the middle. She’s a former U.S. marshal trainee who didn’t become a full marshal. This is her saving grace, this job – it pulls her out of a dark place. 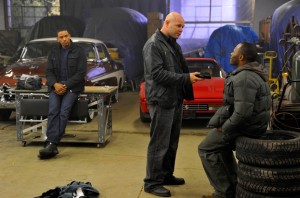 AX: Do the convicts also have mixed feelings about working with the marshals?

OLMSTEAD: Yes. They have mixed feelings, because on the one hand, by helping out this task force, each time they help catch a fugitive, they get a month off their sentence, they get transferred to a minimum security spot, which is much more comfortable than the maximum security they’re all in. Yet, being criminals, they’re a little bit conflicted – sometimes a lot conflicted – about working with law enforcement. And so it’s not like the eager-beaver intern walks in the door. They constantly have to be managed, reigned in, scolded, motivated.

SANTORA: And as things in their lives happen, and as conflicts with the marshals escalate, there are always the questions of opportunities – “Do I just run now? I’m out of the prison.”

AX: In crafting the characters of the convicts, did you think, “Well, if they’re in jail for this crime, this can give us these kinds of stories”?

OLMSTEAD: That’s exactly how we thought of it – “Who do we want to take out for what reason? Who brings what to the table for this team?” We didn’t want to get specific to the point where we’ve seen it before – “This one’s the safecracker and that one’s the this and that one’s the that,” but they do all have their certain skill sets and we know that that will help in the investigations, and also help with their personal storylines.

AX: And presumably nobody is in for something like dog-fighting, where most of the audience is never going to forgive them, no matter what they do later.

OLMSTEAD: No dog-fighting. The truth is, none of the guys that come out to help our team are rapists, none of them are vicious, vicious people. You have to like these people, but they do have their demons.

AX: Speaking of rapists and vicious, vicious people, you’ve said you’re bringing Rob Knepper’s PRISON BREAK character T-Bag onto BREAKOUT KINGS as one of the escapees the team will pursue. On PRISON BREAK, was T-Bag’s popularity a surprise to you guys, given that the character is pretty heinous?

OLMSTEAD: Yes. We brought two actors to read for that role, and there’s no doubt if it would have gone to the other guy, which it never would have in a million years, because Rob Knepper just owned that role, but toward your point, if another actor had that role, he would have gotten half as far as Rob Knepper took that character, because that’s just a whole different stratosphere.

AX: When does T-Bag appear on BREAKOUT KINGS?

OLMSTEAD: We don’t know when it will air, but it will be early in the season.

AX: Do you have any regular characters on BREAKOUT KINGS that you think may find breakout popularity?

OLMSTEAD: Not to sound too kind of fair-minded, but I was just looking at the cast, and there are no throwaways. There’s no, “You guys are the stiffs,” or, “You guys are the straight men and then we get to have the real people here.” On PRISON BREAK, we had a really cool ensemble where we felt everybody was hot. And so on this show, every character has their moments. And so I think it’s like picking your favorite kid. I think they’re all dynamite. They all could pop.

AX: Where are you shooting this?

AX: And is this a thirteen-episode first season?

AX: How arced versus standalone are the episodes on BREAKOUT KINGS?

SANTORA: You can tune into episode six and just watch the show. If you tuned in on episode six of Season One of PRISON BREAK, you’d say, “This is great, but I need to go watch the first five episodes.” This show, you can tune in at any point and enjoy it, though I would recommend watching the pilot and every single episode the moment it airs, have it on your TiVo, and then write the network and tell them how much you love it.

OLMSTEAD: We’re lucky to have such a great cast and we have a great team of writers and producers and we’re really confident in it.

SANTORA: With any show idea, however many hurdles you have to go through to get the show made and picked up, it’s just very gratifying to know that this show has made it and is going to see  the light of day and we’re really happy with it.

AX: With PRISON BREAK, did you go into the last season knowing it was the last season, was it like the situation of LOST, where you wanted a definite endpoint to work towards?

SANTORA: Yes, we did that, definitely.

AX: Does BREAKOUT KINGS have an endpoint?