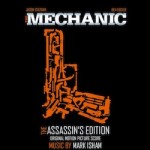 While Mark Isham’s a jack-of-all-genres who has no problem with such musical niceties as THE COOLER’s dreamy jazz and MIRACLE’s orchestral inspiration, it always seems to be the high velocity likes of RUNNING SCARED, DON’T SAY A WORD and KISS THE GIRLS that draws some of his most enjoyably gnarly work.

Now after putting new sound and fury into “remake” scores like THE GETAWAY and THE CRAZIES, Isham’s darker instincts return with newly fueled vengeance for this rebooted MECHANIC. So if you’re looking for the long-winding, psychologically troubling string lines that Jerry Fielding provided for the assassin team back in 1972, you’d be wise to find that Intrada album, as Isham’s score is all about rhythmic heat of the hit.

Though it’s doubtful any studio these days would have the patience for Fielding’s far darker, and less conventionally pleasing approach, that doesn’t mean Isham’s score is any less effective in being multiplex modern. Isham’s always been able to conjure an symphony’s worth of impact with his surreal samples, and the his suspenseful beds here that blend guitar feedback, techno pulses and menacing strings into his own unique pads consistently keeps the MECHANIC entrancing, the score going for a simmering lull until the big metal guns to come out. This is a score that’s as much about it’s time as Fielding’s was for a musical era when audiences still had the patience for longer builds before the kill. Yet fans of Isham’s powerhouse work on THE HITCHER and POINT BREAK are also sure to dig his MECHANIC’s tonal callbacks to those seminal action scores for a new soundtrack that’s as much about atmosphere as it is wanton, rocking mayhem.

THE MECHANIC definitely starts the composer’s new record label Mark Isham Music off with a bang, with as many special editions are there are ways of killing people- including a Complete Collector’s Edition, an Assassin’s Edition wherein Isham improvises on his score and The Double Barrel Limited Edition, which includes both soundtracks, as well as the music on a USB stick, behind the scenes video of his scoring sessions and a specially signed “bonus item”- one whose potentially lethal nature one can only imagine given the subject of this killer score.