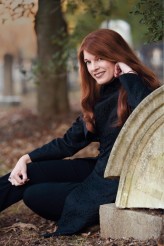 The creator of The Hollows opens up about her new novel, origins, technology and her live streaming book signing

CLICK HERE and bookmark this page to watch the event live 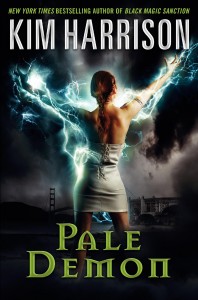 Author Kim Harrison has in a very short time (since 2004) established herself as one of the most popular Urban Fantasy authors on the market. Her series with the overreaching title “The Hollows” just released its 9th book this week entitled PALE DEMON.

For those not in the know, “The Hollows” is an alternate world from our own where a plague (know as The Turn) distributed by tomatoes has wiped out a huge portion of humanity. Because of this thinning of the herd, all of the supernatural beings that had been hiding amongst humans are forced out in the open and now live alongside the survivors. This new society includes things like witches, vampires, pixies, demons, elves, werewolves, and so much more.

The central character of these books is Rachael Morgan, who is a witch and something of a private investigator. She runs a firm out of an old church with her partners Ivy (a living vampire) and Jenks (a pixie). Together they end up in a lot of hot water, and the new novel is no exception.

ASSIGNMENT X chatted with Harrison and found out a lot about her personal writing process and amongst other things, how the Internet has changed marketability for authors.

ASSIGNMENT X: What exactly is the live broadcast that will be streamed on ASSIGNMENT  X this Friday?

KIM HARRISON: I have been to this bookstore in Cincinnati, and it’s set up for events. So what is likely going to happen is that there’s going to be around thirty to sixty chairs, which actually I’m hoping they will have more because I am expecting closer to one-hundred. I will do a very short reading, about two pages out of the text and I will try to make it spoiler free, but it’s awfully hard. Then I will open up the floor for Q & A. I usually do that for about thirty to forty minutes, at least until people get itchy to start the signing and then we do the signing. It varies from store to store, but usually we take pictures and it usually takes about two hours to get through everybody. The people love it, I love it. It’s a lot of fun.

AX: Are you going to be answering questions from the web during the broadcast then?

HARRISON: If it all works out, yes. I would like to do that because this is a very unique opportunity to this. I will be signing for people requesting them from the web as well, but I doubt they are going to be able to see me signing their book. They can click the right button and I will sign it while I am still at the store. With everything working, yes I will take questions from the virtual audience.

AX: Since this broadcast is something new, how has the Internet helped you evolve marketing for yourself as an author over the years?

HARRISON: This is brand new for me as far as live-steaming. I’ve had people record the Q & A and put it up online for me, but that’s completely different. I have found that the Internet has been one of my biggest tools that I can use to get out there and connect with the readers on a one-to-one basis. Now, I don’t respond to emails because it just doesn’t work, but I respond to all of the posts on my Drama Box, which is my blog. I try to keep track of my Facebook page and I respond there. My own website makes it so the ship can turn quickly and I can get things up there right away. The readers, who know me, know that within twenty-four hours after my singing, they can go to my website and see pictures of the event or possibly YouTube links. It really helps increase the traffic by going back to the website and that’s what you want when you are making a bid for the reader’s attention online. I started my electronic outreach way back in 2004, and I had a blog even before that was its name. [Laughs] Before they called them blogs, and it just slowly evolved, and it’s been wonderful. The readers know where they can find me and they seek me out.

AX: Where did you get the ideas to create Rachel and her world?

HARRISON: There’s a couple of ways I can answer this. The first is that I grew up reading fantasy voraciously, and I also loved Science Fiction. When I got bitten by the ink bug to start writing, it was just a natural step to try to mix these two together. Urban Fantasy, although it seems like a new genre, it’s been around forever. Whether you know it or not you’ve grown up with it. BEWITCHED and I DREAM OF JEANNIE are Urban Fantasy. So the idea of mixing the supernatural with the present day has been there, it’s just that it’s taken until now for people to be able to make money at it. Once Hollywood starts spending money on it with things like HARRY POTTER or UNDERWORLD, then New York starts to follow and they’ll start producing more books that have that kind of lean to them.

AX: So then your personal journey to The Hollows started from there?

HARRISON: The actual kernel of the idea of Rachel and the church and the pixies and vampires can from desperation, actually. I like to tell people that “The Hollows” is the longest short story I have ever written. That’s how it started. It was a short story that I wrote as a bid to attract the short story market. So I mixed the weirdest characters I could think of, which was a pixie, a vampire, and witch and put them in a bar and wanted to find out what was going to happen. That is the first chapter of DEAD WITCH WALKING.

AX: Do you map out what each book is going to be or do you start specific incidents that you need to have happen in a story?

HARRISON: It’s a mix. I know where I want the story to ultimately go, and I love to plot. I am a voracious plotter. I plot, plot, plot. I don’t write a word until I have one page chapter outlines for each chapter, but I don’t write those out until I am actually starting the book itself. I never plot out the relationships. I’ve tried and it doesn’t work. I don’t know how the story is going to end as far as Rachel is concerned, who she’s going to be with, who she’s making eyes at, who is going to live or die. I just have an idea of where I want her to end up as far as the hard plot, like where she’s living, what kind of relationship she has with Al (the demon who essentially owns Rachel) as far as is she in the Everafter or is she here? I’ll have some solid things like whether they get the artifact or not, but it’s very much a mix of I know where I’m going, but I’ll change my plan if something better comes along. It is organic, but I know where I want it to be.

AX: Do you have friends or family that you use as sounding boards as you develop a story?

HARRISON: I do. The only person I habitually share with is my husband, and he has been helping me plot these books out since day one. He doesn’t really sit down and help me plot them out, but if I have a question about “do you think this sounds reasonable,” I’ll throw it at him and he might make a suggestion or two. The help I get out of it is mostly me verbalizing what I want to do and I see the holes before he does, but it’s just the act of verbalizing it that solidifies where I’m going and what I’m doing. He knows where the story is going to end up and he’s the only one. My editor doesn’t see it until I turn it in, and I think I scare her sometimes because she has no clue where I’m going with this. Yet, she can see in the previous books all of these little clues and she doesn’t where I’m going because I don’t share it and I don’t know if she likes that or not! [Laughs] I don’t know if she likes being surprised but that’s my style and it seems to work.

AX: Where did the idea of The Turn and using tomatoes to end humanity come from?

HARRISON: I guess, the reason I picked the tomato as the demise of humanity was partially a nod to the movie ATTACK OF THE KILLER TOMATOES. [Laughs] I’ve never been able to sit through the whole thing because it’s so ridiculous, but I thought if I could bring that in and highlight it I wanted to do it. I have a weird sense of humor and it shows in odd places and this in one of them.

AX: I love the fact that you throw so many elements together in your books that you think wouldn’t even got together, but they work perfectly.

HARRISON: They do! I think because the characters themselves are so very real. I’ve spent a lot of time developing these characters. If the character is believable the reader is more inclined to believe it right along with them.

AX: Speaking of characters, as the creator of this universe do you make yourself cry when you kill off beloved characters?

HARRISON: I blithely took Kisten (Rachel’s living vampire boyfriend) and I didn’t realize the impact it was going to have on both the readers and myself. I cried when I wrote it, but coming from a Science Fiction reading background, people die all the time in Science Fiction in the writing. You just kind of get used to it. You mourn and you go on and you get used to it. But, a lot of my reading public especially in the beginning came from a romance point of view and you never, ever, ever kill of a main love interest! They got very angry with me until I explained I wasn’t ready for the series to be over yet. Rachel had found her happy ending in Kisten and so it was either he had to go or the series ended. When I told them that, they understood, and I promised them that Rachel would have her happy ending.
It is still hard with the demise of Matalina (Jenks the pixie’s wife) because she’s a mother and so am I and it tore me up. In fact I’m tearing up right now. These characters get under your skin and it is hard for me to take one out, so to speak. I don’t see any of the core members being cut, they are the story. So taking Rachel or Jenks or Ivy out is a big no-no. Then again Ivy has her second life so she’s not entirely safe.

TV Review of BEING HUMAN – SEASON ONE – “The End of the World As We Knew It” starring Sam Witwer, Sam Huntington and Meaghan Rath.