Home » DVD Review: PHINEAS AND FERB THE MOVIE – ACROSS THE 2nd DIMENSION 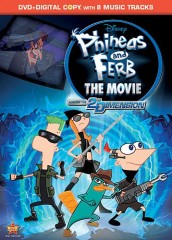 DVD Review: PHINEAS AND FERB THE MOVIE – ACROSS THE 2nd DIMENSION

One of the hardest things to create is an animated kid’s show that not only appeals to adults but children.

And while the Disney Channel and Nickelodeon have had their fare of moderate successes, only Nickelodeon has had long-player SPONGEBOB SQUAREPANTS that transcended from mere phenomenon to a legitimate hit that’s still going strong 12 years later.

Still, Disney Channel keeps trying and they finally cracked the formula with the four-year old animated series PHINEAS AND FERB about two brothers who spend their summer vacation coming up with creative (and death-defying) ways of keeping themselves busy. Even their pet platypus Perry gets to have some fun since he’s covertly a secret agent leading a double life and always trying to thwart the bungling and no so evil Dr. Heinz Doofenshmirtz.

The series is cheeky, fun and always filled with great musical numbers. It has broad appeal and has allowed the show to grow and become one of Disney Channel’s biggest hits.

Now the show has been super-sized for a made-for-TV movie PHINEAS AND FERB THE MOVIE – ACROSS THE 2ND DIMENSION. While many so called “movies” are just a handful of episodes strung together to pad a two hour running time, this entry looks, feels and comes off better than many feature-length big screen animated films.

The format is pretty much the same as the TV series, but it ups the ante. It actually crosses both the Phineas and Ferb storylines with the revelation that they now know Perry is a secret agent. When they get sucked through a new Doofenshmirtz device, they find themselves in an alternative universe where Doofenshmirtz is the very evil leader of the city and everyone else has been oppressed by his tyrannical rule.

It’s fun to see different sides to all the characters (including the alterna-Perry who is a Platyborg and under Doofenshmirtz control too).

The movie also goes for a big, grand adventure that gets more elaborate and complex as the movie wears on. It really pushes the limited cable budget to the max. Perhaps Disney would have better served releasing this theatrically, because they might have made a mint off of it. Jokes fly fast and furious and the movie has ample songs (a show staple) to keep things moving.

The 2-disc DVD features a bonus digital copy of the film, eight songs from the movie, deleted scenes, a bonus episode (“Attack of the 50 Foot Sister”), commentary, some karaoke and so much more.

If you haven’t yet had a chance to check out PHINEAS AND FERB, this is a good starting point. It’s the barometer for which all future made-for-cable animated films should live up to and it once again extends PHINEAS AND FERB from a fad to what will likely be a very long run.