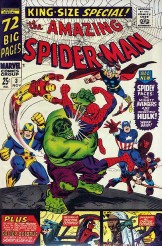 This one is a kind of a no-brainer, but for anyone wondering if the Spider-Man character would ever appear in a future THE AVENGERS team-up movie, don’t hold your breath.

First of all, even though Marvel (and now Disney) owns the character, it’s currently licensed to Sony Pictures, which makes it harder to extract him for a movie at another studio. However, THE AMAZING SPIDER-MAN producer Avi Arad at a press event during Comic-Con 2011 says there’s another reason for not putting him a big movie like that either.

“There’s the team-ups [in the comics] that keep the publishing going, but Spider-Man has a huge universe of its own,” says Arad. “He already has so many great villains and other great stuff like Gwen Stacy. It’s not something we’re thinking about.”