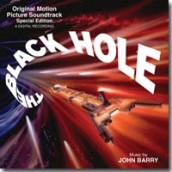 Where Disney turned to Jules Verne for their trailblazing sci-fi magnum opus in 1953 with 20,000 LEAGUES UNDER THE SEA, THE BLACK HOLE sought to tap into the renewed space craze brought on by George Lucas’ STAR WARS. But instead of battling starships, the big difference here was that laser blasts, rolling meteors and robotic mayhem would mostly occur within the awe-striking confines of one mighty spaceship named the U.S.S. Cygnus.

Piloting it far less sympathetically than Captain Nemo (if not without a unhinged commanding presence) is Dr. Hans Reinhardt (played with always-eccentric élan by Maximillian Schell), who gives no end of mad scientist grief to the research vessel unlucky enough to discover his craft and the nearby cosmic anomaly it’s about to enter.

Beyond its nifty effects and production design, the one truly overwhelming presence that sucks everything into its path during the course of THE BLACK HOLE is the towering score by John Barry. Where he’d scored 1978’s far more brazen Italian STAR WARS rip-off STARCRASH, Disney’s BLACK HOLE was a significant step up in the genre for him (though one with just-about equal camp value). There’s definitely more galactic verve for Barry here.

And if his fans’ passion for this score has never abated, it’s because of the energy that resounds from this masterpiece in the composer’s already-formidable cannon, the feeling that Barry’s determined to give his all to validate the big bucks riding on one of Disney’s biggest gambles at the time. While the kind huge symphonic quality that filled John Williams’ STAR WARS scores is more than present here, Barry’s approach is darker and more militaristic, a seriously adventurous tone that does its best to mitigate some of the film’s goofier creations, not to mention some of the nuttier gaps in scientific logic to be seen outside of pre-Galileo Europe.

John Barry has always been about The Theme, that beautiful melodic force that just about every piece of his score flows into. What distinguishes THE BLACK HOLE is the sheer amount of memorable motifs that Barry came up with, from the heroically charging “Overture” to the eerily imposing “Main Title,” its swirling rhythm conjuring the kind of out-of-control, anti-gravity flight that will consume the film’s climax.

Suspenseful beauty, brassy trepidation and eerie electronics (featuring the growling sound of that late 70’s great The Cosmic Beam) at first fill the cathedral-like confines of Reinhardt’s craft in “Cygnus Floating,” “The Door Opens” and “Six Robots,” music that leaves little doubt about his zombifying intentions for the Palomino’s visiting crew. In that respect, the riveting start of Barry’s BLACK HOLE score is a wind-up for Reinhardt to show his true colors, much in the same way the composer would score James Bond entering, and sneaking about the villain’s lair to the point of its explosion, especially in the neo sci-fi 007 case of YOU ONLY LIVE TWICE and MOONRAKER. Barry’s strength has always been about this kind of melodic stealth, the ability to get the maximum musical impact with the least fuss possible- a talent that THE BLACK HOLE’s elegant build is a textbook example of.

The bomb counter’s got to start rolling in any Bond film, which means the Barry doomsday march theme is at hand. This occurs to exceptional effect in the dire percussion of “Durant is Dead” as Reinhardt pivots his ship into the black hole, unleashing Barry at his slow-burn action best. And there’s far more of it in this terrifically complete presentation of his score, with one longtime favorite of mine being “Hot and Heavy.”

While this music’s steady, slow percussion is a seeming misnomer for such a title, it’s exactly the kind of straightforward melodic writing that represents John Barry at his best. It’s also hard not to imagine Bond sticking it to a bad guy (or in this case a cute, googly-eyed robot puncturing an evil red one) with the orchestral exclamations of “Hotter and Heavier.” Barry also get to play the ultimate wages of sin and salvation with the malefic orchestrations, moaning electronics and heavenly flourish for “Into the Hole,” the film’s wacky old-time religion end that’s another reason for its endearment through the years.

As first LP’s to trumpet its digital virtues, THE BLACK HOLE started out sounding great on LP and cassette. And Disney has done a commensurate step-up for HOLE’s appearance CD, just as the format is vanishing into the vinyl nether-realm. And the sound again is nothing less than spectacular, courtesy of Randy Thornton, who also exceptionally restored 20,000 LEAGUES UNDER THE SEA.

In fact, it’s a quest unto itself that he fascinatingly recounts for Intrada’s BLACK HOLE booklet, which also feature Jeff Bond’s always-excellent liner notes detailing HOLE’s production history and the musical story behind one of the soundtrack Grails of all Grails- which makes its truly digital premiere here after its LP release on iTunes in 2009. For few scores have signified the sweeping imagination that filled so many soundtrack fans in the birth of their geek love during the late 70’s and early 80’s. STAR WARS it still ain’t, let alone 20,000 LEAGUES UNDER THE SEA. But in terms of its power to transport its listeners to bold new worlds through the steady power of great themes, THE BLACK HOLE remains an exemplar.