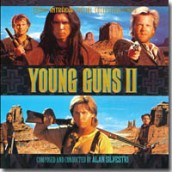 Alan Silvestri has a rocking blast from the western past

Hollywood’s revisionist youthquake movement really hit dead center when a “Brat Pack” gang headed by Emilio Estevez, Kiefer Sutherland and Lou Diamond Philips took up the mantle of Billy the Kid and his regulators for 1988’s YOUNG GUNS. Their new blood helped energize a genre that was rapidly gathering tumbleweeds, the charismatic cast’s rock and roll energy blasting onto the screen with a memorable electric guitar theme by Anthony Marianelli (his score replacing a gunned-down James Horner’s).

Where the rest of Marianelli’s effective synth-based score took a relatively subtle approach to the action, Alan Silvestri would bring his pistols packing to The Kid’s posse two years later for an arguably better, if more nihilistic sequel YOUNG GUNS 2 that tracked Billy’s final days. But that didn’t mean one of the west’s most famous outlaws wouldn’t go down with a blaze of musical glory, especially as Silvestri tackled his first western score with a Morricone vengeance.

Right from its instantly recognizable (for a certain generation) theme for electric guitar and chorus that would fit just right on Clint Eastwood’s poncho, Silvestri knew exactly what old bag of musical tricks to bring to this new-style oater, from moaning Indian voices and Mexican rhythms to playful banjos and galloping, Latin-inflected orchestral action. Yet all are completely fresh and energized with Silvestri’s own, quickly recognizable voice.

With his talent for bold, themes, Silvestri made his own sizable impact on 80’s scoring with the rousing likes of ROMANCING THE STONE, BACK TO THE FUTURE, PREDATOR and THE ABYSS, In YOUNG GUNS 2 he expertly straddles the tightrope between the truly menacing danger on these punk kids’ tails with the cocksure pleasure they take in the outlaw life, a suspensefully ironic comedy-action approach that would take more divergent paths when Silvestri road the range again with BACK TO THE FUTURE III and THE QUICK AND THE DEAD.

Where GUNS‘ ripping guitar is the most rocking thing about this score, Silvestri smartly blends the real instrumental deals with sampled percussion, strings, percussion and voices, a synth element that helps put hip gloss on the adventure. But where Silvestri succeeds most in YOUNG GUNS 2 is giving these characters the epic stuff of western legend, especially in how classic Hollywood scores and their Spaghetti antecedents have taught us to hear these anti-heroic desperados and their ilk.

YOUNG GUNS 2‘s score that’s been a much-requested favorite by Silvestri fans, and Intrada’s well-sequenced CD brings it home to the soundtrack range in style, a flair that hits a bull’s eye from its sound to Joe Sikoryak’s liner note graphics (cleverly laid out in split-screen fashion like the film’s original poster design) and studious liner notes by Jeff Bond. A textbook example of the talent that landed Silvestri on the map, YOUNG GUNS 2 puts one of his most entertaining scores back in the saddle.