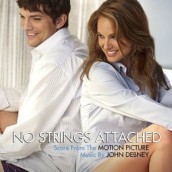 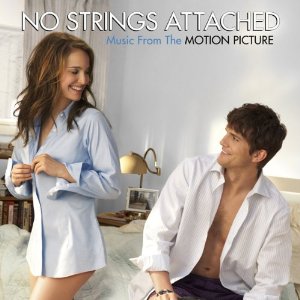 For a manly composer, John Debney has frequently been called upon to sound like a honey-haired escort, no doubt due to his talent for effortlessly conjuring the sweet, heavily-stringed romantic vibe that spells “chick flick” score at the box office.

Yet Debney’s rapidly been showing the town he’s a jack-of-all-trades, especially with last year’s zanily ferocious scores to PREDATORS and MACHETE. So it’s equally no surprise that Debney can devolve his rom-com sound to the mid-20’s age of NO STRINGS ATTACHED’s likable bed-hoppers, and sound more authentically creative than ever in the genre.

The same thing can be said for veteran director Ivan Reitman, as the youthful vigor that both men put into this unexpectedly terrific film might make you think guys with goatees were behind the scenes. It’s a cheerful, alt. vibe on all counts that plays like the real, emotional deal, as opposed to the usual haplessly passé feel of a director, and composer trying to be “with it.”

Debney’s certainly faced that before in comedies that mistook crudeness for hilarity, let alone any kind of emotional truth. While NO STRINGS ATTACHED mixes the three again with infinitely more successful results, the b.s. potential of employing instrumental alt. music regulars is certainly here- starting with a “Golf Date” that sinks its holes with pokey rhythm, retro synths and whistling. A grunge guitar build asks “You Wanna Do This,” while “Emma Loses it” to a 25 second rock-out, her rhythm track building with the joy of not-so empty sex for “Making Love.” Yet the numerous cues like these cast a happy vibe that’s just right for STRING’s gentle randiness, flirting with perkiness in a way that doesn’t make you want to slap the music across the face.

Debney nicely splits his score between attitude and empathy, as the couple have a gentle guitar and tinkling keyboard “Park Date” before “Emma Walks Adam to Car” in a stroll for gentle chord progressions and dreamy, echoed samples But for all of the strum-erificness on hand, NO STRINGS ATTACHED always feels true, with all of its mostly short bits proving to be eminently listenable. Better yet, there’s a wonderful, dreamy beauty to the score. It’s all about the spell of true, first love that develops through the bed sheets, but done with in a thankfully less-is-more approach from a composer’s whose usual romantic hallmark is the lushness of a goose down blanket.

One thing that the composer’s years definitely give him an up on from the “band guy” who’s often hired for this stuff (usually based on the strength of a few good riffs) is Debney’s ability to write an actual, memorable theme, and then know how to throw it in the sack with an orchestra.

Where STRINGS at first might seem like it’s going to be cool chords and playful rhythms, Debney smartly brings in the strings when things get serious in “I’d Choose Adam / First Date,” a musical approach that uses sorta traditional scoring as the embodiment of emotional maturity. In its own small way, Debney’s approach is as sweeping as the largest symphony, especially when his main melody makes Adam’s statement of “I Think I’m Falling” actually touching. “Emma Surprises Adam / I Love You” makes the couple’s final breakthrough into the closest thing to traditional scoring that NO STRINGS ATTACHED gets to, complete with that swelling “big kiss” moment.

Where this is the cliché that’s Debney’s been called upon more times than he count for far lesser movies, the emotion here hits a universal heartstring that embodies the film’s crossover success at being very much a polished Hollywood rom-com while playing like nothing of the sort. It’s an appeal that particularly resonates for Debney.

Debney would be lucky to get three minutes of his work on the STRINGS song album, so Lakeshore Records can be thanked for giving the score its own CD. That being said, the well-chosen tunes by music supervisor Denise Luiso are a lot of fun in the slightly more obvious way they hit their young, hot-bodied targets. After all, what better way to start a soundtrack then with Color Me Badd’s “I Wanna Sex You Up.”

Well engineered to pay homage to hormones that started budding in the 90’s, STRINGS varies between the subtle satire of Lanchen’s GLEE-ready What Good Is a Boy” to the funk update of “Bang Bang Bang” and Viva Elvis’s teaming with The King for   “Bossa Nova Baby.” D’Angelo getting his Prince slow burn sex magic on with “How Does It Feel,” while catchy top-40 teen pop kitsch plays with Robbie Nevil’s “It Was You.”

More deliberate laughs come across with Adam’s menstruation mix tape inclusion of Leona Lewis’ “Bleeding Love,” while Hugo’s country rock gets in the best gag for “99 Problems,” whose refrain is “and a bitch ain’t one.” There’s also nice unplugged vibes in Plain White T’s “Rhythm of Love” to The Tender Trap’s “Love Lost,” a song whose bursts of rock energy is exactly what a couple needs to get to the wedding on time.

Whatever their tone, STRINGS song album is definitely the right mix tape to pop in when you want to have a few giggling rounds in bed, a selection of good sexy, fun that ‘s anything but sloppy rom-com soundtrack seconds

And its song soundtrack here