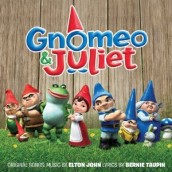 Elton John has a blast partying with Shakespeare's garden gnomes

There might not be a kitschier combination than the pairing of garden gnomes and Elton John, or in the case of GNOMEO AND JULIET, a more unexpectedly winning one. For when you add up the soothing, soulful sound of the 70’s pop-rock icon with the orchestral bells and whistles that composer James Newton Howard is duty-bound to deliver for the plaster faerie figures, you end up with a musical confection only slightly less eccentric than the classic song mash-ups of MOULIN ROUGE– made far less maddening here by the fact that it’s only Elton John’s immortal tunes that are being thrown into the blender.

Not only does GNOMEO offer a greatest hits package that includes the still-terrific “Your Song,” “Rocket Man” and the apropos “Tiny Dancer,” but the melodies themselves play delightful havoc with Howard’s sprightly animated score He deftly uses John’s immediately recognizable riffs as if they were movie themes, making melodies from “Benny and the Jets” and “Your Song” do the elfdance.

Though there’s the inevitable Disney pop riff (in this case Nelly Furtado making Chipmunks-like mincemeat out of “Crocodile Rock,” John himself contributes a nice, original ballad with “Love Builds A Garden.”

The final touch of delight is ending the album with Disney’s music for the animatronic bird-filled “Tiki Tiki Tiki Room,” a final touch of sweet, post-pop irony that makes GNOMEO‘s a true delight that’s as nostalgic as it is hip.