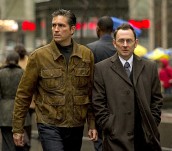 While producer J.J. Abrams is known for his mind-bending, mythology-soaked series like LOST, ALIAS and FRINGE, CBS just picked up his latest production PERSON OF INTEREST created by MEMENTO scribe Jonathan Nolan.

While CBS is not in the business of mythology-heavy genre shows, CBS Entertainment President Nina Tassler spoke to the press today about how this show will fit into its brand – especially by giving it the plum CSI: CRIME SCENE INVESTIGATION slot on Thursday nights at 9:00 pm.

“You have high-tech meets street vigilante and featuring very real, vivid characters,” says Tassler. “It’s a strong franchise and has all the bells and whistles of a CBS procedural, but it’s torqued a little bit. It has a little bit of genre to it – just enough for our audience.”

The series stars LOST’s Michael Emerson and Jim Caviezel and deals with a former CIA agent thought-dead who teams up with a mysterious billionaire to prevent crimes. The twist – the billionaire has created a software program that uses patterns to recognize people who may be involved in violent crimes (either as the perpetrator or victim).

“I think this is the best of both worlds show,” says Kelly Kahl, Senior Executive Vice President, CBS Primetime. “It’s not a complicated mythology and the cool thing that J.J. Abrams brings to the table is a non-traditional CBS viewer to the table. We think this is a broad appeal show. Everybody liked it, and that’s why it’s there.”