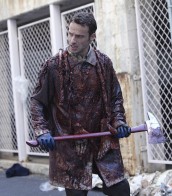 © 2010 AMC
Andrew Lincoln in THE WALKING DEAD - Season One -
Reviews

Following the brilliant, emotionally intense debut of THE WALKING DEAD, we return to the claustrophobic confines of an abandoned tank surrounded by the living dead on the streets of post-apocalyptic Atlanta as sheriff’s deputy Rick Grimes (Andrew Lincoln) – recently awakened from a coma and into a living nightmare – meets an ally via radio. Glenn (Steven Yeun), an intrepid young man with a glib tongue that looks like he leaped right out of the pages of the comic and onto our screens as he arrives to save Rick from last week’s cliffhanger and a horrible fate as lunch for zombies.

However, getting out of the “geek”-infested street (honestly, why do people in zombie stories always work so hard to come up with new euphemisms – isn’t “zombie” good enough?) is just step one, as they’re soon united with the rest of Glenn’s group, a foraging few dispatched from a nearby survivors’ camp to get supplies – and one of them isn’t exactly a team player.

The second episode does an admirable job of paying homage to its comic book source material while demonstrating to long-time fans that the television series will definitely forge its own path through the zombie apocalypse.

One of the comic’s earliest action-packed set pieces is realized here with even more visceral impact as Rick and Glenn coat themselves liberally with the fetid remains of Wayne Dunlap and attempt to shamble past the horde. The opener established its mission to push, if not utterly shatter, the boundaries of what we expect to see on commercial television with its opening gambit, allowing our hero to shoot a little girl (well, an undead one) in the head right there on screen. Between that and the stunning effects work on the iconic “Bicycle Girl” zombie from the comic book’s first issue, the pilot episode pulled no punches, but this week’s episode upped the ante with the gruesome dismemberment of Dunlap.

The pivotal scene reinforced one of the series’ central conceits – Rick Grimes as the defender of humanity’s highest ideals, including our reverence for life and the need to remember that even a zombie was once a person. His impromptu eulogy for Wayne just before laying into his remains with an axe served to remind Rick’s companions and the viewers that Rick had no intention of letting anyone forget what matters most. And then the intestines flew.

If AMC had distributed scratch-‘n’-sniff cards, they couldn’t have made the olfactory and emotional weight of death in that scene more palpable. Therein lay the darkly comic wordplay of this installment’s title, referring both to the overflowing viscera on display as well as Rick’s single-minded determination to find his family at all costs, even if it means walking straight into the zombies’ den. Surely he would be just as devoted to the cause even if he knew that Lori (Sarah Wayne Callies) had taken up with his ‘best friend’ Shane (Joe Bernthal), now going at it like animals in the survivors’ camp with only Rick’s wedding band momentarily coming between them.

If the hints that Lori and Shane’s affair might have begun before the apocalypse throw off comic book fans that remember things a little differently, then they’ll surely be surprised at how many new characters we meet during this episode. While most of them are little more than potential cannon fodder, none of them are as sledgehammer subtle in their calculated addition to the cast as Merle Dixon, played with gusto if not unpredictability by Michael Rooker. While racial issues often come to the fore in zombie storytelling, rarely has there been such an overtly racist, misogynist bastard ready-made for the audience to hate without reservation. In fact, while we all know where THE WALKING DEAD originated, Dixon seems far more of a ‘comic book’ character in the worst sense than anyone that actually came from those paneled pages. Although Dixon’s fate seems sealed, there’s very little doubt that Merle will rear his hateful, stubbly head again soon, even if those walkers (sigh) make it to the roof.