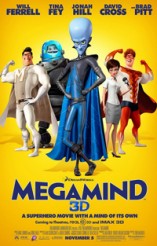 After the success of this summer’s super-villain animated feature DESPICABLE ME, it was a big question mark if the similarly themed DreamWorks animated comedy MEGAMIND was going to pale in comparison.

Thankfully that’s not the case. MEGAMIND exists in its own animated universe spearheaded by hilarious and cheeky vocal work by Will Ferell and Tina Fey. They take the material and elevate it by transcending the animated universe and delivering a great overall movie that takes the superhero genre and spins it on its head.

What sets MEGAMIND apart from most superhero movies is it’s told from the point of view of the villain, in this case Megamind (Ferrell), a big, blue-headed alien from another planet. He’s spent his life trying to destroy super hero Metro Man (Brad Pitt). It’s a rivalry that always includes kidnapping the same girl, TV reporter Roxanne Ritchi (Fey) and some kind of inane trap that Metro Man always foils. However, Megamind’s latest evil genius plan for Metro Man actually results in the hero being defeated, leaving the city in Megamind’s hands.

It’s fun at first for Megamind and his sidekick Minion (voiced by David Cross), but soon, having it all becomes boring. Megamind needs someone to stop him, so he decides to use Metro Man’s super hero DNA to implant inside a mild-mannered citizen and train that person to be his foe.

The unlikely test subject turns out to be a slacker cameraman (voiced by Jonah Hill) who soon becomes Tighten – the city’s latest hero. However, Tighten quickly learns it’s more fun to be bad than good and begins displaying far more villainous traits than Megamind intended. Now, Megamind must become the hero to save the day from  his own creation.

The end result is a very funny film that blurs the line between what makes a hero and a villain – it also gives Ferrell ample room to play in. It’s refreshing that the filmmakers allowed Ferrell to bring his own skewed sense of humor and timing to the role – it’s what really allows Megamind, as an animated character, to soar beyond most comedians shoved into animated vocal work. Fey also does a great job transforming Ritchi into a wonderfully complex and engaging heroine. It’s a perfect comedy team that provides laughs for both the adults and the kids. I’m starting to think a live action pairing of Ferrell and Fey would deliver comedy gold.

This movie would have worked as live action or animation, which is a testament to animation’s continued evolution and sophistication. It’s top notch here and really has the depth and scope you normally find in big studio superhero films.

That said, this is yet another 3-D movie where 3-D is actually a hindrance and not an asset. It brings very little to the table, and after the fourth 3-D film in a row I’ve seen this month, the gimmick is getting very, very old, super fast, especially with the eye strain and irritation caused by viewing movies in 3-D (don’t get me started). Premium ticket prices are a given for these films now, but unless 3-D is going to push the boundaries and our experience beyond the 2-D level, there’s no point in subjecting our pocketbooks to this enhancement unless it’s absolutely mind-blowing.

However, the merits of MEGAMIND as a movie, are not that it has a 3-D gimmick attached to it, but that it delivers a great, entertaining story. Screenwriters Alan J. Schoolcraft and Brent Simons have crafted a smart little film which is directed with epic flair by Tom McGrath. It’s much better than anyone would have expected it to be, and the big-headed blue-skinned Megamind has potential to become DreamWorks next big franchise. SHREK look out, your heir apparent may have just arrived and blue may very well be the new green.