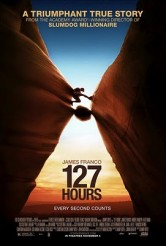 Chances are, you’ve heard of Aron Ralston. He’s the outdoor enthusiast who got pinned by a boulder in a freak accident and, after five days, had to cut off his own arm to escape. For those who can cope with a depiction of Ralston’s ordeal, 127 HOURS is a consistently gripping drama that puts us face to face with the question of what we would or even could do to save ourselves in a similar situation.

James Franco plays Aron, a healthy, happy, capable engineer who loves spending his free time in the great outdoors. At least in 127 HOURS (this reviewer has not read Ralston’s autobiographical account of the event, BETWEEN A ROCK AND A HARD PLACE), Aron’s biggest personal issue is that he fails to connect deeply with other people, which has caused his most recent girlfriend (Clemence Poesy) to break up with him. This means that Aron doesn’t tell people where he’s going when he embarks on his biking/spelunking adventures. When he misjudges the stability of a boulder over a crevasse and jumps in, causing the massive rock to leave its moorings and smash down on his arm, nobody even knows where Aron is to begin looking for him. For that matter, it will be awhile before anyone may even know he’s missing.

As 127 HOURS doesn’t ever leave Aron, we never see whether a search is mounted or not. The film, directed by Danny Boyle, who co-wrote the screenplay with Simon Beaufoy, keeps us stuck right there in the narrow canyon fissure with our protagonist, except when Aron’s mind flashes backwards or into fantasy. Not only are we impressed with Aron’s will to live, we’re struck by his survival skills – he comes up with aids for himself out of his climbing gear that most of us (at least, the non-adventurers) wouldn’t think of in the first place, certainly not under such duress.

In reality, Aron really did have a video camera with him, which he’d originally brought along to document the natural beauty of Utah’s Canyonland’s National Park – which, as captured here, is remarkable in itself. 127 HOURS makes superb use of this as a narrative device, allowing Aron to record what he at one point believes are his goodbyes to his family and a sarcastic interview with himself where he comes to something of an epiphany.

Franco is excellent and we believe him every step of the way. In much smaller roles, Amber Tamblyn and Kate Mara are sweet as fellow hikers who have a few hours of fun with Aron before he sets off alone again on his fateful journey.

Some viewers clearly cannot take the scene in which Aron finally frees himself (at least one person bolted from a press screening). It is shown in clinical detail and, at minimum, we flinch in empathy. It’s properly harrowing. For those familiar with the horror genre, it also seems that this is the authentic version of what the SAW films purport to be driving at, minus any human sadism or any ticking clock other than Aron’s physical need to get to water, food and shelter, and his discovered need to get to civilization.

Here’s where this review may delve into disagreement with popular reception of the film. Doyle and company make an enormous effort to make us share in not only Aron’s agony, but in his determination and the emotions that gave him the will to live. Some feel it with him. Others (like this reviewer) see what’s intended, but the level of calculation involved and the fact that what we’re shown in flashback of Aron’s life doesn’t ever make us sense a need doesn’t add up to something we can share with the onscreen character. We’re proud and relieved as hell for him when he finally gets free and glad at what he later achieves in his personal life. We’re shown the real Aron Ralston as a postscript, and he seems perfectly happy, in addition to being recovered from his ordeal and functioning without a forearm.

But it’s possible to come out of the theatre feeling, “Wow, good for him” rather than sharing in the breakthrough about the need for connection that apparently fueled Aron’s will. What we get is certainly enough – it just doesn’t seem to be all that was intended we receive.