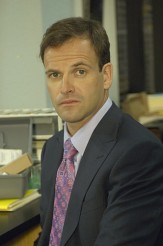 Discoveries are made and there’s a shootout, but somehow this episode lacks fire

The DEXTER episode “Circle Us” may be a good indicator that when Dexter (Michael C. Hall) is mulling things over rather than reaching epiphanies, the episode tends to feel like its holding back, even when its action lunges forward. Such is the case here.

The rape/murder gang that attacked Lumen (Julia Stiles) tries to move the bodies of previous victims out of the swamp. However, the driver responsible for disposing of the corpses gets into a freak accident at an intersection, with the result that five dead women spill out onto the road for all to see. This sets all of Miami Metro PD on the case.

While Dexter assures Lumen that the cops will certainly catch all the responsible parties, Lumen can’t accept this result – she wants to kill her tormentors herself. Dexter is sympathetic and, despite the horrific past results the last time he did this, turns the police on to an already dead main suspect Boyd Fowler (Shawn Hatosy) so that he and Lumen can track the others.

Meanwhile, Quinn’s (Desmond Harrington) paid snitch Stan Liddy (Peter Weller) sees Lumen at Dexter’s old house and tells Quinn about it – as Lumen resembles the dead victims and Quinn already suspects Dexter of murder, Quinn and Liddy both come to the wrong conclusion. The Santa Muerte case leads to a nightclub shootout, where one of the murderers kills the police informant. The killer is then shot dead by Deb.

There’s more gunplay than revelation this time around. Jonny Lee Miller shows up as Jordan Chase, the man behind the self-help audiotapes that the late Boyd Fowler listened to so religiously. This is a promising angle for the plot trajectory, but Miller’s scenes so far don’t pack much punch.

There is a particularly funny moment where Dexter shows Lumen a photograph of Chase with one of his Miami PD co-workers and Stiles vibrates with a mixture of emotions that makes her performance continually surprising and compelling. However, Dexter himself is in a cautious, wait-and-see mode, and the episode follows suit.

It’s good (as DEXTER always is) and we want to know what comes next, but this is an episode that feels more like set-up than payoff.