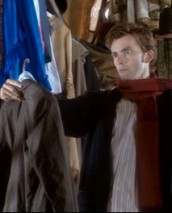 American fans of DOCTOR WHO rejoice! At long last, after so many years of being second-class citizens, we are about to achieve synchronicity with our UK cousins. For the first time ever (well, except for that one time in 1983 when we got the 20th anniversary special first, but never mind), American WHO viewers will be seeing this year’s brand-new Christmas special on exactly the same day as those watching it in the UK.

On December 25, 2010, BBC One and BBC America bridge the temporal gap between US and UK WHO fans, and it surely is about time!

While we get ready for this year’s winter-time adventure, a variation on the well-worn Charles Dickens story, “A Christmas Carol” – the special even shares the same title – guest-starring Professor Dumbledore himself, Michael Gambon, let’s take a look back at some of the spectacular moments that helped to cement the Doctor as a hero of the holiday season.

What’s that, you say? They never even made DOCTOR WHO Christmas specials until 2005? True enough, but that doesn’t mean there aren’t a few Noel nuggets buried in the Doctor’s long, labyrinthine past! With the assumption that we’ll look only at the television series itself and none of the peripheral material – books, comics, audio dramas – let’s see what we can unwrap.

[Special Thanks to Cody Schell and J.R. Loflin for suggestions and moral support] 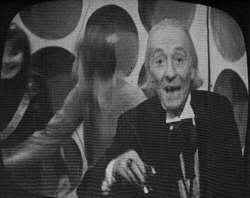 1) The Doctor Shatters the Fourth Wall, “The Daleks’ Master Plan-The Feast of Steven“ (1965)

Perhaps the most legendary DOCTOR WHO Christmas moment, this was an impromptu greeting offered by the First Doctor, William Hartnell, to his holiday-time audience. It happened about midway through an epic 12-part Dalek story with an episode-length respite from the action, the first ever aired on Christmas day. Breaking the fourth wall, the Doctor smiled and said “a happy Christmas to all of you at home!” And to all a good night…in any time zone! 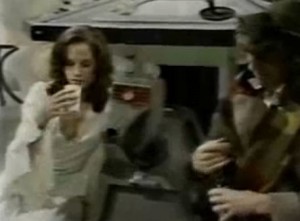 I know this one isn’t strictly part of the actual DOCTOR WHO continuity as it was done for an internal BBC Christmas blooper reel, but who said this list had rules (except me)? In an outtake shot during the show’s “Key to Time” season, the Doctor, Romana and K9 have drinks, K9 sings “We Wish you a Merry Christmas,” and when the tin dog asks the Doctor what he desires, it looks like we’re about to get a Doctor/companion song years before Grace made history. Doctor, behave!

This is the only DOCTOR WHO spin-off of the classic era, and the foundation for everything that followed in the lives of these characters from “School Reunion” to THE SARAH JANE ADVENTURES. What rural British Christmas would be complete without a Wicker Man-esque cult and creepy country folk? 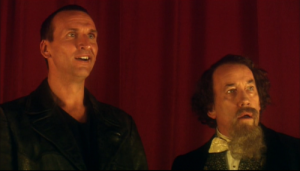 We never got a Ninth Doctor Christmas special, but in a way they managed to sneak one in for the third-ever episode of the WHO revival. In the  new series’ first trip to the past, the Doctor and Rose land on Christmas Eve and team up with Charles Dickens to combat zombies, but the winter-set story also features Dickens performing “A Christmas Carol” and offering Tiny Tim’s blessing at the episode’s close.

In many ways, the first official Christmas special is still the best, with the introduction of the Tenth Doctor David Tennant and a story that underlines just how essential to our lives the Time Lord has become. However, it’s that triumphant moment when he finally emerges from post-regenerative trauma and takes command that makes this truly magical.

I had to include two moments from this story, and this one is close to any long-time fan’s heart. Our one glimpse to date of another room in this era’s TARDIS, this sequence not only features the Doctor finding his new suit but wandering through nods to countless costumes of the past…including a certain maroon scarf!

It was the second-ever Christmas special with something to prove. Could this new series team keep pumping out crowd-pleasing holiday adventures? They proved it with a show-stopping sequence that featured the TARDIS police box careening through traffic to save one loud-mouthed bride.

One of the reasons we love DOCTOR WHO is that it remains quintessentially British, and one good example of its resolute adherence to cultural expectations was in the climactic sequence of this special, where the Doctor wrestles the starship Titanic away from an almost certain collision with Buckingham Palace. When the Queen waves her thanks, you’ll feel like an honorary subject. 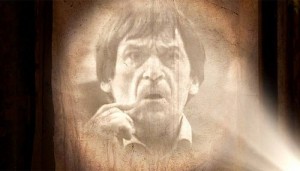 Some folks might pick the emergence of the Transformers knock-off, the CyberKing, as the highlight from this special, but the far more moving event was the projection of the Dalek infostamp that contained the Doctor’s life history. For the first time in the new show, all the previous incarnations from William Hartnell to Christopher Eccleston were shown, finally fully acknowledging the existence of every Doctor that preceded current star David Tennant. 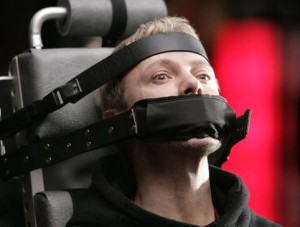 I can’t help it, I loved John Simm’s unhinged incarnation of the Doctor’s eternal arch-foe, the Master. He was crazier than ever here, in the first part of the Tenth Doctor’s final adventure, and his ravenous consumption of a Christmas turkey neatly subverted one of those heart-warming holiday traditions.

AGREE? DISAGREE? Let the war of words begin below …

CLICK HERE for more DOCTOR WHO stories from ASSIGNMENT X