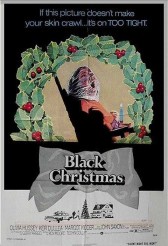 Oh, what director Bob Clark has wrought. Not only is he the man who brought audiences the joy of Christmas with 1983’s A CHRISTMAS STORY, he also brought fear nearly a decade earlier with 1974’s seminal slasher film BLACK CHRISTMAS.

For decades, many cited HALLOWEEN as being the first true slasher film, igniting a subgenre that continues strong to this day, but it was this curious little exploitation film that set the bar for all slasher films to come.

It’s the holiday’s again, so now, is as good a time as any to revisit why this is hands down the best Christmas-themed horror movie (sorry SILENT NIGHT, DEADLY NIGHT).

Set on Christmas night, BLACK CHRISTMAS (not to be confused with 2006’s slicker, but not as effective remake BLACK X-MAS) surrounds a sorority house infiltrated by an unidentified man named Billy who has holed up in the attic and begins to kill off the sorority sisters in expected body count formula.

Using the camera as the killer’s POV (much like John Carpenter did years later in HALLOWEEN), Clark creates an unsettling spook show with some expertly crafted suspense sequences that hold up incredibly well nearly 36 some odd years later. The minimalist score also adds to the spook factor. 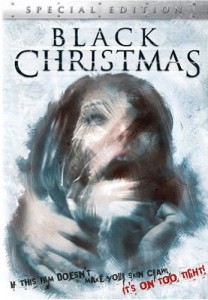 The girl suffocated to death with plastic and left upstairs for the duration of the film in a rocking chair is still a classic, iconographic horror movie moment.

The cast features many up and comers including Olivia Hussey and Keir Dullea, with Margot Kidder – pre-SUPERMAN – a stand-out as a boozy sorority sister who constantly puts her foot in her mouth.

Another surprising gift of the movie is how funny it is. The humor is character-based, but Clark (who also was responsible for the first two PORKY’S movies) really offsets the horror with some very dry-witted comedy moments and even a gag at the police precinct that would feel right at home in the PORKY’S franchise.

Still, Clark was on his own when he made this movie – creating a slasher movie template that has been copied over and over again. In fact, when the police tell heroine Olivia Hussey “the killer is calling you from inside the house,” it’s just another reminder that another slasher film,  WHEN A STRANGER CALLS, ripped off this movie wholesale.

While BLACK CHRISTMAS was a hit in Canada at its time of release, it never really gained prominence in the states and distributor Warner Bros. in the 1970’s kept retitling the film (from STRANGER IN THE HOUSE and SILENT NIGHT, EVIL NIGHT), trying to find the best way to make a dime off an obviously controversial movie.

Of the special features on this 2006 DVD Special Edition release (which is also available on Blu-ray), the documentary “The 12 Days of Black Christmas” features some new interviews that are really informative although Bob Clark is nowhere to be found. However, Clark, composer Carl Zitttrer and John Saxon were videotaped at a Q and A after a special screening of BLACK CHRISTMAS two years ago and up some nice background on the evolution of the film.

Also suspiciously absent on this disc are trailers from the original release, though you do get alternate audio mixes of two scenes which is a nice treat and the 5.1 Surround is stellar.

It’s great to see such a pristine print of this film finally available. BLACK CHRISTMAS is a clever, truly terrifying film, expertly acted and completely politically incorrect. What more could you ask for from a horror film set on Christmas outside of a killer Santa Claus?