Zachary Levi may play a nerdy super spy on TV’s CHUCK, but this Wednesday he’s moonlighting as the roguish animated character Flynn Rider in Disney’s Rapunzel retelling TANGLED (which opens nationwide on Wednesday).

It’s the kind of double duty the actor relishes – especially since both parts are so different.

In TANGLED, Levi plays thief who befriends the long-haired Rapunzel and the two go on an epic adventure together.

On CHUCK, which is now in its fourth season on NBC, Levi is the show’s title character who was co-opted by the CIA because he accidentally downloaded a program into his brain that allowed him to know the history of various people and objects just by looking at them. Chuck started out as hapless, but now that the program gives him instant knowledge of things like kung fu and weaponry (and flamenco guitar) – albeit it doesn’t always work – he’s become much more of a real spy. 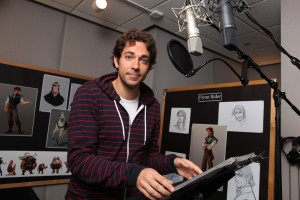 Levi recently talked about where CHUCK and Chuck are going this season, as well as his work on the new Disney animated film TANGLED – and why his own hair is so short.

ASSIGNMENT X: You voiced the male lead in Disney/Pixar’s new animated Rapunzel movie, TANGLED. You said you initially auditioned with a British accent.

ZACHARY LEVI: The character initially called for an English accent, and my agent fought to get me in the room, because obviously, I’m not English. I went in and I’ve done voices my whole life, so I felt comfortable doing it. So I did it and they liked it, and then I had to sing, because it’s a musical, and they liked my musical audition, and they said, “All right, the job is yours,” and then pretty quickly after that, they made an executive decision and said, “He’s not going to be English.” They’ve never had a major Disney character have an accent, because they’ve always had American accents and I bow down to [Pixar/Disney animation chief] John Lasseter. I think the guy’s a genius and so if he says, “No English accent,” then I say, “All right, yes, sir.”

AX: Did you have to jump through hoops to get the job?

LEVI: I didn’t think I’d get the job. Animated films nowadays, especially for lead roles, they’re A-list actors. Big, big actors do these jobs, I knew I wanted the opportunity to go in and audition because I was such a huge fan of all things Disney, so just the opportunity to go in was very cool. And when I got the job it was like “ahhh, I fooled them, they think I’m John Krasinski or Ryan Reynolds, this is great.”

AX:  Did you feel intimidated by having to sing and hold your own up to Mandy Moore and singing songs written by Alan Menken?

LEVI: I grew up doing a lot of musical theatre and I’ve always wanted to sing professionally in some way shape or form and didn’t know if that was ever going to come to fruition. And the audition for this came up, and I’ve been a huge Disney fan for my whole life. I think the Disney Channel was my primary caregiver for awhile, growing up, with my generation with THE LITTLE MERMAID, BEAUTY AND THE BEAST and ALADDIN. I’ve got a couple of sisters, princess movie or not, I was still watching them, and still loved them. I grew up singing all of Alan Menken’s songs, not knowing they were Alan Menken’s songs and even NEWSIES as well. Then I met him and I was trying to explain to him what a huge fan I was of all of his stuff, and I don’t think he grasped how nutty I am about his stuff. Whatever the case, it doesn’t matter, I got to sing an Alan Menken tune. Actually two, really, in “I Have a Dream” I have that little bit too. All this is very dream come true, bucket list thing.

AX: So what do you feel has been the mission statement for Season Four of CHUCK?

AX:  Last season got rather dark toward the end. Is CHUCK the series and/or Chuck the character going to get darker this season?

LEVI: I don’t think so. We got pretty dark last season, and that was just a place we came to. It happened, and we embraced it. Our show has so many different genres all wrapped up into one anyway that you kind of have to go places at certain times, but I think this year we’re back to a little more comedy. I mean, now Morgan [played by Joshua Gomez] is a part of the mix in a big way, and he’s nothing but funny in a big way. Josh Gomez is one of the funniest guys I’ve ever known.

AX:  Are you thrilled the writers decided to make Morgan an apprentice spy? 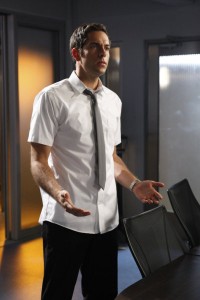 LEVI: It was just meant to be. It was meant to happen. You can’t keep those secrets forever and it’s made it great, because honestly, one of the biggest bummers was getting into the first season thinking I was going to get to work with Josh a lot and then immediately Chuck had to start lying to Morgan and our friendship really splintered. He wasn’t a part of any of the spy world and he was only in the Buy More, but now that he’s a part of the world we get to play off each other and banter. He’s so funny.

AX:  In a way, Morgan has sort of taken up Chuck’s old fish-out-of-water position in regard to the CIA.

LEVI: Exactly. As [Chuck’s character] evolved, Captain Awesome [Ryan McPartlin] was a little bumbling and then he was like, “I can’t do this, bro,” but Morgan’s all about it. He’s like, “What are we doing next? Let’s go, give me a gun.” So it’s great. He’s so gung-ho about the adventure and it’s a great thing.

AX: Josh Gomez as Morgan and Adam Baldwin as Casey have some interesting scenes together …

LEVI: Oh, they are a dynamic duo in and of themselves. It’s really a fantastic duo.

AX: This haircut is a different look for Chuck. Was the new look your decision, or NBC’s decision, or did your hair just grow differently?

LEVI: Well, it wasn’t NBC’s decision, but they, as well as my bosses at work, have allowed me [to change it]. What happened was, we got to the end of last season and I was going on a vacation. I went to Europe for six weeks, and I was going to be traveling and backpacking and I didn’t want to deal with a whole bunch of hair. I wanted to be able to wake up and barely have to wash it, if at all, and just go and travel. So I cut it really, really short and then I was having to work on little things throughout the hiatus after I got back, so you have to maintain whatever the hair length was at that point. And then CHUCK was around the corner, and I was like, “Well, look, I hope they’re not mad at me, but my hair’s been different every year anyway, and the character continues to evolve as well and he becomes a better spy every season.” So I just now felt like, these are little indicators, little things that go along with the progression of the character.

AX: With Linda Hamilton playing Mary Bartowski, Chuck and Ellie’s mother – with her TERMINATOR past, do you feel at all like John Connor this year?

LEVI: [laughs] “Have you seen this boy?” Well, a little bit, I guess. It’s just awesome. I’ve gotten to work with so many icons, like John Larroquette and Chevy Chase and Scott Bakula and now Linda Hamilton and especially the [actors] who tie directly into our hardcore, rabid fan base are awesome. They’re Easter eggs that we get to give them. It’s like, “Here you go, another nerd hero that we’ve all loved.” I put myself in the same category, looking at QUANTUM LEAP and TERMINATOR and Tricia Helfer comes on the show – BATTLESTAR GALACTICA. Those are all incredible little tie-ins, and I think it’s a great way to go with the show. 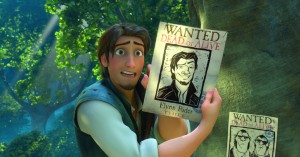 AX: Isaiah Mustafa, the actor who does the “I’m riding on a horse backward” Old Spice ads guested earlier this season on CHUCK …

LEVI: That guy is awesome. I felt bad for him, because everybody was like, “Dude, so, what were the commercials like? Was it a one shot? Was it one take? What were the special effects all about?” But he was so cool and so generous and genuine and super-funny and ridiculously good-looking, which makes you hate him a little bit, but not really. He’s got a really rich, deep voice and he plays this recurring character named Greta who’s in almost every episode, but it’s played by a different actor every time. It’s a CIA worker – the CIA has now taken over the Buy More, and you see someone named Greta every episode, a guy or a girl, you never know. [Mustafa as Greta] is very staunch, very by the book.

AX:  You’ve done a series of commercials for Comcast. Are you in those as Chuck or as yourself?

LEVI: I’m me. You know, it’s actually interesting, because of the way everything’s worked out with [the merger of] Comcast and NBC and all that. I think a lot of people are like, “Oh, so they own you guys now, and then they came to you to do this spokesman thing,” but [Comcast approached] actually before any of the ink dried. I just was one of the people on their list of, “Maybe we’d like him to do a spokesperson thing,” and I got the job and so I’ve done half a dozen spots for them, but they don’t play in L.A. or New York. You’ve got to be in Colorado to go see them, I guess.

AX:  Anything else you’d like to say about CHUCK or your career overall?

LEVI: I love and thank the fans with all of my heart and I hope that whether it be on CHUCK or wherever else, I hope that I can continue to bring them stuff that they love and enjoy and I’m honored to do it.

CLICK HERE TO READ REVIEWS AND INTERVIEWS FROM “CHUCK”