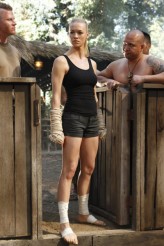 A surreal, enjoyable episode with Sarah going Rambo in Thailand and earning the reputation of "the giant blonde she-male"

The last thing I would ever call CHUCK’s super-hot spy Sarah (Yvonne Strahovski) is “the giant blonde she-male.” Yet, that becomes one of the funnier running gags on “Vs. Phase 3,” an episode where Chuck (Zachary Levi) is fighting for his life and the loss of brain cells in Thailand as villain Adelbert De Smet (Richard Chamberlain) goes digging in his brain for the Intersect.

Chuck’s Intersect has been on the fritz since Mom Bartowski (Linda Hamilton) scrambled it a few episodes back, and it resulted in his kidnapping last week.

Now Sarah is going all Rambo in her quest for Chuck – leading her to Thailand where she kicks some serious she-male ass. This is the Sarah we’ve only seen glimpses of in previous seasons – the one who is out of control and a complete, hard body weapon of mass destruction.

As Sarah, along with Casey (Adam Baldwin) and Morgan (Joshua Gomez) get closer to Chuck, Chuck is dealing with mind experiments which are trying to get him to Flash and reboot the Intersect. It provides some pretty cool, trippy excursions into Chuck’s deranged brain and it’s expertly directed by Anton Cropper.

In one of the stronger episodes this year that deals with the Chuck/Sarah relationship, we truly get to see the weight both of them put on their relationship. Chuck, thinking he’s worthless to Sarah without the Intersect and Sarah realizing she loves Chuck no matter who he is balanced by excellent writing and great character moments.

Great emotions and an awesome pay-off deliver one of the better (and more unique) episodes this season. And with the Thailand recreation and loads of extras, this definitely feels like it cost more than the average CHUCK episode.

As a side plot, Ellie (Sarah Lancaster) discovers a bizarre laptop in the car her dad left her. She and hubby Awesome (Ryan McPartlin) can’t figure out how to get it working, so Awesome calls on the Buy Morons for help (which provides some even more surreal comedy).

At the episode’s end, Ellie knows the password to get into the computer, and what they see on it blows their minds (but we don’t see it). How much do you want to make a bet it’s the Intersect 3.0?

With one of the better balances of Buy More antics and spy stuff, “Vs. Phase 3” is filled with many great moments, but the Thai people constantly calling Sarah “the giant blonde she-male” is just so delightfully bizarre, it works every time the gag comes up.

It’s also nice to see Morgan falling nicely in with the spy team, without losing who he is. He’s Morgan, no matter what he does, but he brings so much more to the table now that he knows Chuck is a spy. There’s also a couple of great Casey moments, where you can see he too is enjoying Morgan’s evolution from Buy More manager to a major asset to the spy team.

Overall, another solid CHUCK episode with action, laughs and a psycho Sarah. What else could you ask for?