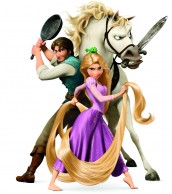 When Walt Disney was just getting his feature animated division rolling in the 1940s, he was struggling with a way to bring the story of Rapunzel to the big screen. Now, seven decades later, the 50th animated film from the company has finally cracked that story.

TANGLED is the end result (opening tomorrow), a delightfully funny and endearing tale of the golden haired Rapunzel (voiced by Mandy Moore) who sets out on an adventure with roguish thief Flynn Rider (voiced by Zachary Levi) to find out who she really is.

Mark Kennedy, who served as TANGLED’s head of story, spoke with ASSIGNMENT X in this exclusive interview about the story process for the film and why it took so long to un-tangle the classic fairy tale as an animated feature. 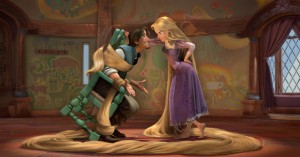 ASSIGNMENT X: How long has the story been floating around at Disney?

MARK KENNEDY: They say that Walt Disney wanted to tell the story, but I never saw anything from that version. You think I would have. I don’t know if anything exists from what he was trying to do. I don’t know where he got hung up, but there are at a lot of challenges to this story that I think he got stuck at some point.

AX: What were the issues you faced in bringing the story to life?

KENNEDY: When you ask people to tell you what they know about Rapunzel, they know the tower, the long hair and someone saying, “Rapunzel, Rapunzel, let down your hair.” So the thing that was toughest, you’re dealing with a girl that gets kidnapped in the first two or three minutes and she’s basically kept in a prison for eighteen years. Just saying that, it’s such a dark, dark concept, so we tried to find ways to feel the gravity of that situation, but not be depressing and dark and turn people off. We really wanted the film to be fun and light. We felt if you start off with this grim, depressing kidnapping for eighteen years, you’re not setting the tone for a fun movie and people won’t laugh. That was challenging. It’s also a love story. If it was just the story of a girl who needs to get back to her parents, that would be different. So we had to distract people a little bit from that and go, “oh, I remember she has to get back to her parents.”

AX: I really liked the interesting dynamic she has with Mother Gothel – which to me is somewhat based in her own twisted love for Rapunzel, but also based in deceit.

KENNEDY: We wanted to find something different than “the mean witch who locks her in the tower and she’s never leaving.” Obviously, we tried to create a lighter version of this, where it sounds like she’s building her daughter up, but she’s always undercutting which is true how some mothers are. And also, we tried to make the tower really attractive. Instead of thinking she’s going to lock this girl up and never let her out, wouldn’t she make it the most attractive place in the world so her daughter would never want to leave?

AX: When the title of the movie changed from RAPUNZEL to TANGLED, did you adjust the story because of that title change?

KENNEDY: The title changed around last January and it didn’t have any bearing on the story. From my perspective, I felt the title change was because it became clear it’s the love story about two characters. And if you watch the movie, does it feel like Rapunzel’s movie or Rapunzel and Flynn’s movie. We wanted her to be strong and also create this strong guy character who is a match for her. So like any romantic comedy, they go on the road, they’re stuck together and they’re fighting all the time. I think we were so successful in doing it, by the end, people felt that TANGLED represented the film better, because it represents two people who are stuck together that fall in love and they felt calling the movie RAPUNZEL would be cheating Flynn, who became such a great character.

AX: How did the character change when Mandy Moore came aboard?

KENNEDY: Listening to all the voice actresses who auditioned, the thing that really stuck about Mandy was she didn’t sound like she was acting. I think the biggest change was the type of humor we had with Rapunzel, because Mandy turned out to be so sincere and warm. I think the Rapunzel, pre-Mandy, had a little more attitude and more repartee with Flynn that was a little more snarky and sarcastic. Mandy would never be that way, so it really helped us find that character.

AX: How did Flynn change when Zachary Levi was hired?

KENNEDY: We always imagined Flynn as British, and Zach came in and did this great audition with this British accent. He could nail the humor and nail the sincerity and he did a great British accent. When [executive producer] John Lasseter heard it, he said, “I don’t like people putting on accents.” Again, to that sincerity thing, he wanted him to be very warm and likable, so that worked out great. It worked great with the accent and without. 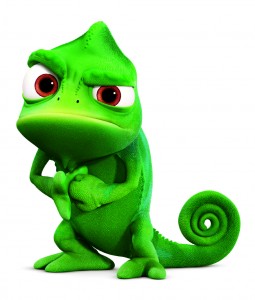 AX: How do you build the supporting characters – particularly Pascal the chameleon and Maximus the horse without treading on previous Disney sidekicks.

KENNEDY: We were very conscious of that. At first Rapunzel didn’t have a sidekick, and we really didn’t want her to have one for that reason. There are so many classic Disney elements where we didn’t want to bring it over, we wanted to do it if it was the right thing to do. For instance, there’s no storybook opening to the movie. So the sidekick was something we felt “it’s been done, it’s expected, let’s not do it.” We found though, she’s alone a lot, and she can’t really talk about her feelings to Gothel, so she needs somebody to talk to. The chameleon actually came from something early on. She was painting whatever animal would come visit her in the tower. So she was just painting this chameleon and because he kept changing colors, she had to keep repainting. It was a joke about her life and what it would be like to paint something that changed colors. When we decided we needed a sidekick, we remembered the chameleon and liked him. He’s a little less cuddly and a little more prickly than a Disney sidekick and we felt it would be a good match for her.

AX: Do you feel that the success of SHREK, which has turned all fairy tales on their head, has made it harder to do more straight-forward fairy tale animated movies?

KENNEDY: As much as SHREK made fun of that stuff, what they were making fun of was that stuff that had been so standard. Sometimes people would put cliches in their films without asking “is this the best thing” and I think, it had to be sincere and tell the best story and we were doing it for the right reasons. We don’t have as many songs as something like BEAUTY AND THE BEAST. And we thought, “what are the songs we need” and let’s not add more because we should. So we latched on to the conventions that worked for us and made those work for us in TANGLED.