Home » Preview: DEXTER will focus on “Atonement” for Season Five 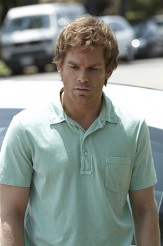 Preview: DEXTER will focus on “Atonement” for Season Five

What to expect from DEXTER‘s fifth season? How about “atonement,” which is the theme this year  according to executive producer John Goldwyn who says that Dexter (Michael C. Hall) feels that he was involved in some way and feels culpability in Rita’s death.

“This scene is of atonement and illuminated and dramatized over the course of the year,” says Goldwyn.

Executive producer Sara Colleton adds “the form Dexter takes to achieve atonement, is not in a form that is conventional in any means.”

The Showtime series, which airs Sunday nights, will also have “tattoos” playing  an integral part of the big crime that Miami Metro is uncovering this year.

Jennifer Carpenter’s Debra character (and Dexter’s sister) will also be more a part of the cops in the bullpen this season.

There won’t be a season-long villain Dexter will be hunting down this season either.

“We’re taking a break  from what has been in how we’ve plotted out seasons in the past few years,” says Colleton. “There won’t be a season long adversary for Dexter. As he’s going through different stages of his grief really, without knowing what he’s feeling, that it takes him through different stages and there will be different characters who will come in and interact. The throughline is Dexter’s atonement and different people help him along the way in different capacities.”

And the relationship between Dexter and the spectral image of his dad Harry (James Remar) will also evolve as well.

“I really think the relationship with Harry becomes more dynamic this season,” says Hall. “They’re not quite as adversarial.”