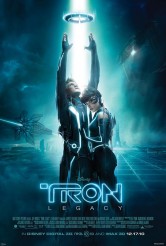 A sequel that is true to its original, meaning that it has an interesting look and a lot of exposition that doesn’t pay off very well

TRON: LEGACY opens with a very cool, TRON-ized rendition of the traditional Walt Disney Pictures logo, with the fairytale castle rendered in black, white and silver. This suggests that we’re in for a film of mild subversion that makes what we’ll see just that more wonderful. Actually, what we’re in for is a surprisingly faithful follow-up to the original 1982 TRON.

Will we see an alternate universe where anthropomorphic computer programs are rendered primarily in shades of black, white and gray? We will. Will the light cycles of the first film have been updated to be more exciting and dynamic? Yes, they will. Will TRON: LEGACY have the same issue as its predecessor when it comes to thin characterizations and talk about changing the world so grand, broad and vague that it could mean practically anything? Yes, it will.

One can’t really fault TRON: LEGACY for this last, as it’s hardly betraying the first film by maintaining its aura of vaguely benevolent generalized babble. This is a sequel in the truest sense.

We meet Sam Flynn as an adorable little boy, whose adoring father Kevin (Jeff Bridges) promises his son that he’ll show him the fabled Grid. Kevin goes out for the night – and is never seen again. Twenty years later, Sam (now played by Garrett Hedlund) has become a hacker and physical daredevil, whose principal joy in life seems to be harassing Encom, the tech firm founded by the elder Flynn, where Sam is still chief shareholder.

Then Kevin’s old friend Alan Bradley (Bruce Boxleitner) tells Sam he’s received a page (shades of retro gizmos!) from Kevin’s old office at the shuttered arcade (Kevin’s business before becoming a technocrat). Sam goes to the dusty old business, goes onto the computer – and a device comes up behind him, zapping him into the world of the Grid.

Sam isn’t totally shocked, as he’s heard about this digital parallel universe from his father, but despite the fact that the benevolent elder Flynn clearly vanished into this realm, it has returned to being a very unfriendly place. Sam searches for his father, while a number of hostile entities, one of them very familiar-looking, try to capture and/or destroy him.

Aside from the particulars, the basic premise describes any number of action/adventure/fantasy stories, both good and bad. TRON: LEGACY seems so wholly taken with its environment that writers Edward Kitsis & Adam Horowitz, working from the story they crafted with Brian Klugman & Lee Sterndahl, don’t even try to add anything to the mix. They attempt to press a lot of buttons on the father/son emotional front, but apart from Bridges’ laid-back, friendly demeanor, there’s nothing specific enough for us to be moved.

There are also a lot of narrative false starts. Much is made of whether the original Tron character is still alive, but the answer turns out to almost not matter. Likewise, Flynn Senior waxes ecstatic about a new kind of being that emerged within the Grid, but we are never shown why this is cosmically important (as Flynn insists it is).

There’s also the matter of the appearance of the Grid and its inhabitants. The first film came out when folks were still playing Pong. The black, gray and shining white with occasional streaks of color as a theme was congruent with real-life computers. While twenty-first-century technology has certainly made the effects look much cooler, the look of the Grid is still black, gray and shining white, while real-world computer interface has grown much more colorful and varied. From the onscreen evidence, this change in tech isn’t incorporated into the film either, so that what resonated amusingly with most folks’ then-limited computer experience in the first film now just follows parameters that don’t mesh with anything contemporary (unless one deals often with DOS).

Director Joseph Kosinski does make both the entrance and use of light cycles thrilling and the action is frequent and punchy, but he lets things grind to a halt in most of the conversations, which is a pacing problem in a film with this much exposition. Bridges as Flynn has a warm, shaggy, slightly Dude-like demeanor that makes him good company. At the other end of the spectrum, Michael Sheen plays the proprietor of a Grid nightclub with a sleazy gusto bordering on insanity. Everyone else is fairly earnest.

It’s hard to evaluate TRON: LEGACY without taking on board all of the external and internal hype – that is, both the publicity and the dialogue within the film alluding to the possibility of world-changing discovery. The filmmakers cannot really do anything about the former and it is a disservice to blame them for any expectations created by marketing. We can however wish that the movie delivered emotionally or even narratively on its story-point hints.

TRON: LEGACY is okay, a good-looking diversion. It has some very cool, TRON-universe-specific effects and Jeff Bridges to recommend it. Just don’t go in expecting anything that will make you imagine or feel anything new.