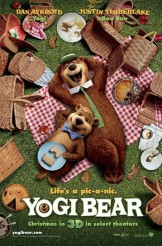 He may be smarter than the average bear, but this movie sure isn’t

In an attempt to capitalize on the success of 20th Century Fox’s ALVIN AND THE CHIPMUNKS film franchise (which combines CGI creatures with live action antics), Warner Bros. has dug into their archives to create a live-action version of the classic cartoon YOGI BEAR, but with lesser results.

The problem with YOGI BEAR isn’t that it’s so bad, it’s that no one seems to be trying to make it very good.

The cartoon was a thin premise to begin with – a smarter than average bear Yogi Bear would steal picnic baskets at Jellystone Park with his partner-in-crime Boo-Boo to the chagrin of Ranger Smith.

That’s the same premise here, except stretched to 80 minutes and with Ranger Smith being more of a good guy instead of a nemesis. Throw in Jellystone Park being shut down by a slimy politician and that’s about all there is to say about a not-so-complex plot.

ED’s Tom Cavanagh is likable as Smith, as he always is, although he’s not given much to play with. Anna Faris, who is always so good, is stuck in one of her most bland roles ever (she plays a documentarian). She and Cavanagh have a nice chemistry together, but it’s torturous that no one wrote anything substantial for these two, usually funny performers, to play with.

That said, the audience for YOGI BEAR is younger children who will find a talking CGI animated bear amusing. There’s potty humor, some dancing (Yogi shakes his butt) and a story that gets to a rather useless point and gets out.

Yogi may be smarter than the average bear, but this movie sure isn’t.