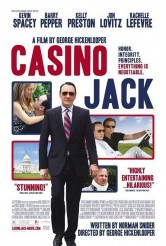 Sometimes, you just can’t make this stuff up. Most Americans have heard of Jack Abramoff, if only because he wound up going to jail. Exactly what he did to land in prison is addressed in CASINO JACK, a pitch-black comedy of greed, crime, politics and the intersection of all three.

An introductory segment shows us Jack (Kevin Spacey) psyching himself up in the mirror, then landing in a prison cell with two very intimidating men who are much larger and tougher-looking than the white-collar criminal. Jack decides to tell his cellmates what has led to his current circumstances.

As a Republican lobbyist during the Bush era, Jack is riding high as the top influence gun in D.C. He and his freelance partner Michael Scanlon (Barry Pepper) are happy to charge outrageous consulting fees in exchange for delivering bribes, financial and other, to special interest groups to Capitol Hill figures who then publicly laud and vote for whatever it is Abramoff’s clients want. This seems to be such standard operating procedure that nobody bats an eye, and indeed, Jack becomes famous.

All of this feeds Jack’s ego. He prides himself on being a religious man, funding synagogues (and some more controversial causes) and hoping to set up an Orthodox Jewish school, while opening restaurants. Jack becomes so famous as a mover and shaker that he’s booted from a law firm that employs him. No worries – Jack lands a better gig in no time. However, when Jack and Michael get involved in tribal politics in order to make sure they’ll get their fee from a Native American group with a casino, they manage to create an unusual deal of bad will. More, Jack’s notion that he and Michael can run a fleet of casino cruise ships causes him to enlist shady associate Adam Kidan (Jon Lovitz) as a figurehead.

Kidan in turn brings in a mobster acquaintance (Maury Chaykin), who has his own way of enforcing Jack’s sent-from-afar directives, and things inevitably start spiraling out of control. Matters aren’t helped by Michael’s cavalier attitude toward his love life – there’s nothing like an angry woman who knows all the details to add to a complicated situation.

Norman Snider’s screenplay has a punchy sense of momentum, but what really gives CASINO JACK its jolt of energy is not only Spacey’s performance – wonderfully on-target as it is – but also the clear vision that Abramoff acts as he does because he believes he’s totally in the right. Gordon Gekko may have said, “Greed is good,” but the WALL STREET character merely had bravado and cunning, not moral righteousness backing up his viewpoint. Jack believes his actions are endorsed by the Almighty and that anyone in his position would and should act as he does.

He’s faithful to his devoted if sometimes understandably worried wife (Kelly Preston) and a loving father to their children, a foundation that makes him feel that everything he does in the name of his family is just and right, even if others may quibble (to put it mildly). It’s an eye-opener, as are the ins and outs of his transactions with the likes of Tom DeLay (a smarmily effective Spencer Garrett).

Director George Hickenlooper maintains a current of excitement throughout the proceedings, never losing it even when dread enters the picture. He’s so matter-of-fact in his depiction of what’s happening that even incidents like a bizarre, violent attack with a pen feel congruent with the overall tone. The filmmakers and Spacey achieve something relatively rare here – we are truly appalled by Jack Abramoff, and we don’t empathize with him, but we can’t help but be fascinated by him and want to know what happens next in his world.

There is some melancholy surrounding CASINO JACK, as both director Hickenlooper and costar Chaykin died (separately) earlier this year. They certainly went out on a professional high note. CASINO JACK manages to be entertaining and illuminating, even as it helps confirm some worst fears about what really goes into at least some of our nation’s law-making.