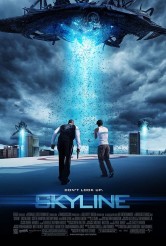 A Syfy Channel-type movie with better effects and less dialogue

Although its creators have stated otherwise, SKYLINE feels like a movie where the plot was created to service the special effects rather than the other way around. This said, as apocalyptic alien invasion movies go, it’s got a lot of action and characters who behave mostly as we’d expect suburbanites would when confronted with a shocking, insoluble situation. 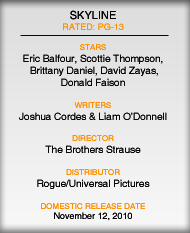 SKYLINE begins with the alien attack – huge, organic-looking ships that hover and emit a bright light that sucks up anyone who ventures out to see what’s going on – then flashes back fifteen hours earlier to introduce the main characters.

Jared (Eric Balfour) has come to Los Angeles with his girlfriend Elaine (Scottie Thompson) to celebrate the birthday of his old friend Terry (Donald Faison), now a successful special effects artist living with girlfriend Candice (Brittany Daniel), but secretly messing around with his assistant Denise (Crystal Reed). Oliver (David Zayas) is the building concierge who first tries to keep the party noise down and then contends with more serious matters as things go from bad to worse. Jared is prevented from walking out into the light, but has lingering effects from it. The condo complex is under attack, but so is the whole city of Los Angeles and, from the absence of all news, perhaps the rest of the world. Is it worse to huddle inside and hope for respite, or try to flee?

The screenplay by Joshua Cordes & Liam O’Donnell sets up the circumstances and then lets rip. Directors the Brothers Strause (aka Colin and Greg Strause of the VFX company Hydraulx) go for spectacle rather than scares. The alien ships/creatures designed by Alec Gillis and Tom Woodruff are tentacled, squishy entities that look rather like denizens of the deep ocean, big enough and detailed enough to be creepy, but they are used more like the bugs in STARSHIP TROOPERS than, say, the title beings in ALIENS. They are agents of the apocalypse, but they’re too large and loud to be especially sneaky.

There is action, but the characters are too caught up in their own survival struggles for us to feel a sense of apocalyptic angst. There’s a nice bit where Jared gets overwhelmed and weeps, an all-too-likely reaction we see all too seldom in films of this ilk, but mostly this is a movie where people are running all over the place while trying to form rudimentary strategies with very little in the way of offensive weaponry.

It should be added that SKYLINE has a pretty weird final sequence. It clearly makes sense to the filmmakers, but it’s a head-scratcher for the audience. We can tell what’s happening, but not why the aliens are doing what they’re doing.

The dialogue is mostly utilitarian, but there isn’t that much of it, and the effects are impressive. SKYLINE is ultimately a serviceable film about a small group of people trying to survive a disaster of extraterrestrial origin. Chances are you’ve seen something like this before, but if you want to see it again, SKYLINE is a decent entry in the genre.