Home » Exclusive Interview: KIDS IN THE HALL member Dave Foley gets his Christmas jollies on LEVERAGE

© 2010 IFC
Dave Foley in KIDS IN THE HALL: DEATH COMES TO TOWN
Interviews

Is it the winter season or the extra special Christmas bonus to Season Three? That’s the question surrounding the last three episodes of LEVERAGE, which begin airing this Sunday night (December 12) on TNT.

To kick off the holiday spirit with a comedic chaser, ASSIGNMENT X takes five with Dave Foley in an exclusive interview where he spoke to us about his LEVERAGE role as a shady mall manager in “The Ho, Ho, Ho Job” as well as chatting about reuniting with the Kids in the Hall for the hilarious mini-series KIDS IN THE HALL: DEATH COMES TO TOWN which aired this summer on IFC. 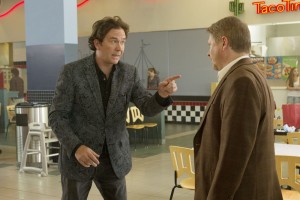 “I play the manager of a mall who is involved in some nefarious plan of identify theft and stealing from customers,” says Foley. “But it turns out there’s an even bigger twist, but I won’t tell you what the twist is.”

TAKE 2
How was it working with another comedic tribe like the cast of LEVERAGE after being part of your own troupe with KIDS IN THE HALL?

“They made me feel very alien and very unwelcome,” says Foley dead-pan, and then cracking a smile. “No, they were very friendly. It was nice to be in Portland [where they film the show] for a week and half, and I’ve never got to spend that much time there. It’s a great city. They’re very welcoming and friendly and it was a very nice experience.”

TAKE 3
Was it fun working on such an ambitious show?

“It looks like a big show and they move very fast and everyone is very professional,” he says. “They were all really on their games and they got through these huge days really fast.”

TAKE 4
Who did you get to work with the most on the episode?

“Gina Bellman [who plays Grifter Sophie],” adds Foley. “Most of my scenes are with her.” 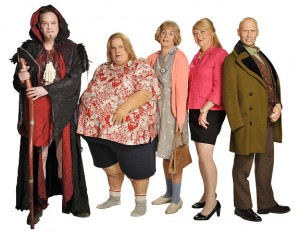 TAKE 5
Can you talk about reuniting on-screen again with the KIDS IN THE HALL with the DEATH COMES TO TOWN mini-series?

“We started talking about ideas for movies and Bruce [McCulloch] and Kevin [MacDonald] started fleshing it out,” says Foley. “They called the rest of us and said, ‘we’re thinking this is more of a mini-series than a movie. What do you guys think of doing a TV show?’ We’ve always said ‘no’ to doing TV over the years, because we never wanted to go back to do sketches, but as a mini-series, that sounded interesting.”