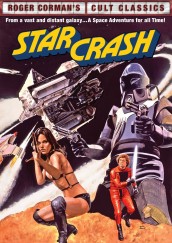 A hilarious, strange, amateurish, stylish and incomprehensible mess, which is why this is one of those great, lost exploitation movies that’s so bad, it's good

But it’s entertaining in so many ways – from the unintentional humor – to the occasionally inspired visual effects, that you can’t help but cheer for this little low-budget exploitation film that could.

The story is clearly a nod (or rip-off) to STAR WARS featuring some of its visual look, to a few of its composite-like characters.

The story follows a rogue fugitive named Stella Starr (Caroline Munro) and her faithful mystical companion Akton (Marjoe Gortner). They end up getting arrested and then asked to save the universe against the evil Dark Lord – (Joe Spinell).

Their adventures include hanging out with a cowboy robot J (yes, I said cowboy robot) and he has a cowboy accent and attitude to boot, fighting barbarians on horseback and some troglodytes. Along the way, a super-young David Hasselhoff shows up as a prince in one of his first roles and Christopher Plummer is the Emperor of the galaxy providing the only seriously strong dramatic acting in the entire film.

However, it’s the film’s attempt to be good, which makes it so damn entertaining. There are some stellar visuals in spots that really showcase what imagination and ingenuity can achieve. And then, there’s some really cheesy, bad effects that happened because they didn’t have a budget.

There’s also the stiff, oddball acting by Gortner and the over-the-top performance of Spinell as the villain that really make this a must-see experience.

STARCRASH throws everything at the wall and at 90 minutes, it’s a fun little ride that has to be seen to be believed. I laughed my ass off so many times, and couldn’t get enough of its silly charms.

This is presented in the Roger Corman edited American version, but on the second-disc of bonus features, all the deleted material from the international version is presented. More goofy line-readings and a much kookier feel are present here.

Trailers, and a nearly 90 minute interview with actress Munro are presented. Also included is a cleverly put together featurette on the making of the VFX. This includes two deleted stop-motion scenes.

The amazing digital transfer is another reason why sprucing up an old exploitation movie can be a good thing. The intent of director – is clear here. He really was striving for greatness (despite failing many times), and the cleaned up print really showcases the care that went into making the movie look as good it could possibly look.

Some of the visual effects composites aren’t as crisp (as is the case with cleaning certain VFX up on older films), but overall, a great looking film.

It’s hard to top STAR WARS, but it doesn’t mean STARCRASH doesn’t try (and fail at the same time). Still, the campy quality of the film (and Munro in sexy outfits) makes you forget just how lame it is at times.

Often people will say something is so bad it’s good, and it makes you wonder “why bother.” But, you have to understand that STARCRASH is entertaining through and through. Director Luigi Cozzi is trying to make something good. Maybe he didn’t have all the skill set, the script or the money, but he tried harder than most exploitation directors of the era. And the film is so deranged and manic, only mad genius could have crafted such a noble failure.

Seek out STARCRASH. Own it (it’s cheap). You won’t be disappointed and you’ll spend countless hours laughing hard at the cowboy robot with a Texan accent telling Stella “Look, it’s barbarians on horseback.”