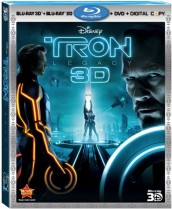 While chatting with TRON: LEGACY director Joseph Kosinski today regarding the TRON: LEGACY DVD and Blu-ray release arriving this Tuesday, April 5, the director spoke to ASSIGNMENT X about the status of the next sequel TRON 3 (aka TR3N).

“We’re working on the story right now,” Kosinski tells AX. “Once we get a script we’re all really happy with, we’ll take it to the powers that be and see if we can go back to the grid.”

As for the storyline, Kosinski says the film will continue the adventures of Sam Flynn (Garrett Hedlund)

“I think we will pick with where TRON: LEGACY left off with Quorra [Olivia Wilde]  in the real world and what does that mean and the possibilities it opens up for the next chapter. It’s that relationship between the two of them that’s the next step.”

Also, the son of Dillinger (who makes a brief appearance in the beginning of TRON: LEGACYand played by an uncredited Cillian Murphy) could potentially play a bigger role too.

“Dillinger [David Warner] was a really important part of the first film and felt like an easy way to continue that storyline and thread to have his son in the new movie, ” says Kosinski. ” That way you have people ask those questions of what the Dillinger legacy is in the world of TRON. We didn’t want to ignore it completely and it leaves a really nice springboard for some intertwining development for the next film.”

As for coming aboard officially as a director for TRON 3, Kosinski says he’s game, but it all comes down to what project happens first for the director (he currently is scheduled to direct the Disney reboot of THE BLACK HOLE and OBLIVION which is currently shopping for a new studio).

“That’s my intent,” says Kosinski. “We’re developing it now. It’s all about getting a script and story and making sure we can get the same team back together.”