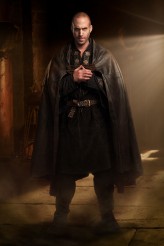 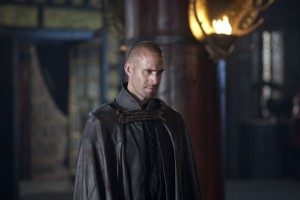 It’s safe to say that Starz’s new series CAMELOT, premiering Friday night at 10 PM, is much less like the musical and more like the 1981 John Boorman feature film EXCALIBUR, or indeed like Starz’s blood-and-sex-drenched series SPARTACUS.

Show runner/executive producer Chris Chibnall has brought forth a take on the famous British legend with plenty of darkness and detail. The wizard Merlin is played by Joseph Fiennes, famous to film audiences as the Bard in SHAKESPEARE IN LOVE and most recently on television as the lead in FLASHFORWARD. Fiennes gives us his take on his new series and his role in it.

ASSIGNMENT X: How would you describe this version of CAMELOT?

JOSEPH FIENNES: It’s all very elemental and pagan, Celtic, and so we’re keeping it true to that. What I love is, [the villains are] not cardboard cutout bads – you really discover in Episode One why [Morgan, played by Eva Green] is galvanized in the way she is, and how sad – she’s rejected by her family and the need to be loved, really, which brings about this awful kind of evil.

AX: You have compared Merlin’s condition after doing magic as being like someone who is drained and depleted after a drug overdose. How did you come up with that interpretation?

FIENNES: When I was first offered this, I thought, “Merlin?” And then, “Me, Merlin? Merlin’s [got a] big beard, staff, and pointed hat, and why?” It wasn’t how I felt I would be attracted to the part. I felt this man was not to be trusted, is full of duality, and I also wanted as an actor to have fun and discover the range, and I think Merlin has an inexhaustible amount of wonderful, mercurial, Machiavellian range. I wanted to tap into that.

So there’s a certain choice of the look and a certain choice of the way he wields his magic. This was [series creator] Chris [Chibnall] and I batting it out together – we wanted the magic to be something very organic, elemental, true to [Merlin as] a pagan character. He’s not of this newfangled Christian age. He has a very different belief system and also, we both decided that it’d be great to look at the magic where it wasn’t, you could just wield it and walk off, but actually, like all of us, if we have a power, whether it’s with our pen, the microphone or whatever, there’s a level of, you know we can’t abuse it. The moment we step up, we know that abuse comes back to haunt you. So with the magic like that, [it can’t be abused without a price]. Even in politics, you can’t abuse politics.

I think he’s a great politician, Merlin, as much as a man who can wield magic. So I think his magic is really about the persuasion of the people. He would be running huge media outlets if he could. I mean, it would be too easy to rely just on magic alone. I’m going on, but it’s a really lovely point, and I love it, that sense that he wants to put this young boy in power without using magic. He doesn’t want to taint it with the arts that he’s involved in. He wants this young boy to be that seed of power, to become King Arthur through absolute pure integrity and he then has to rely on, to get the peg in the hole, he might have to nudge it with a little bit of magic. So he’s always battling with that duality.

AX: Have you read any of the old accounts of the Arthurian legend – the Alfred Tennyson and/or Thomas Malory versions?

FIENNES: Yeah. I love Tennyson. It’s very romantic and beautiful, and he’s one of my favorite poets as well. I understood that Chris was looking at the source material from MORTE D’ARTHUR, and so Malory’s translation was something that is definitely basic within our story, so you get all the iconic [incidents], the sword in the stone, the Lady in the lake, you get – a bit of a spoiler alert – a very wonderful, powerful ending, which is in Mallory’s Book One, when Morgan goes to Arthur and how that takes us into Season Two, which is pretty scary and horrible and brutal and riveting, so we’re true to those. I had a look at those. It’s so rich and monumentally huge, and that’s why television suits something like CAMELOT. EXCALIBUR – I love it, it’s very ambitious, but it tells one tiny point [of the Arthurian myth] in a film. Actually, this is why television is wildly exciting, [as is] the hybrid of cable, which is uninterrupted by these ghastly commercials. [On broadcast television, it] seems like the dramas are put between the commercials now. [Premium cable] actually gives the narrative its full form and you can sit down and enjoy it uninterrupted. I love it for that. And you can really examine the full weight of CAMELOT. 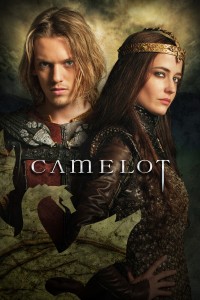 AX: How do you feel about the prospect of doing a second season of CAMELOT?

FIENNES:. Each of Malory’s books are wildly exciting and they can fill a whole season. So there’s so much to be tapped into of source material, it’s never-ending. I think from my experience of FLASHFORWARD, it seems that first season is that real throw-down-the-colors and we do it with as much love and passion as we can, but we have to wait and see – there has to be an ongoing kind of romance and dialogue about how we evolve it, so this is like, “Phew! We did our bit, there it is, what do you think? How can we extract it, make it better?” That’s what I love about television – it’s a real dialogue between audience, journalists [and filmmakers], unlike film, because it’s done and dusted and there are no changes.

AX: Speaking of FLASHFORWARD, how do you feel about the way that series ended on a cliffhanger?

FIENNES: Yeah, it did end on a cliffhanger. It’s so difficult. It was such a monumental show, it was so huge, and it was weird. The gas was sort of on the pedal, and then off [the show got off to a strong start, then faltered, then was pulled off the air for retooling], and then it was very convoluted. It’s very difficult, because there were so many people involved, and so many opinions, and sometimes I think it’s difficult and almost impossible to have [things work when it’s not] all about one voice, one person, whether to fail or not, but just to deliver their vision, regardless of all other kind of influences.

[With CAMELOT on Starz]. I love the fact that [it doesn’t have] that awful sort of ratings thing, which is so outdated. The [relationship between] the advertising and entertainment world, the little that I glimpsed, it feels very subversive. And it’s lovely to be free of that very ambiguous relationship between who pays you and people demographically and the way that you have to pace [episodic commercial television] and when the commercial comes in – all of that, which was kind of a new education to me, but I love the fact that this is free of that, it doesn’t rely on ratings so much. Our show [FLASHFORWARD] was the highest DVRed, and the advertisers don’t want that. And so it’s a weird sort of labyrinth. I love the fact that just on filmic terms, you can watch this [CAMELOT] uninterrupted for the purity of the narrative without the commercial interruptions.

AX: You also get to speak with your real-life accent in CAMELOT, whereas in FLASHFORWARD, you were playing an American. Is it easier to act when you don’t have to worry about doing an American accent?

FIENNES: Not really, no, because you’re inside the character, and that’s just who they are. It would be like, is it difficult to act when I’m on a horse, or if it’s difficult to act driving a car at the same time, or firing a gun, or doing an accent? These are all the kinds of aspects of a character, of who they are, so there’s no difficulty with it. I think the difficulty for me, the challenge is really the regime of television. You shoot seven to nine pages a day and in film, the reality is one to two pages a day.

AX: You’ve played a wide range of characters in your career. How do you choose which projects you want to do?

FIENNES: I think I’d like to keep it genuinely tasteful for myself as much as for anyone else, but as you evolve with age, you get more picky and choosy about the world and the way you see it and the character, or yourself within the character, the portrayal, and also you like challenges and you like to sort of examine the human complexity, warts and all. So it’s a sort of juggling act. 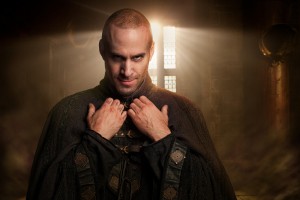 AX: Where was CAMELOT filmed?

FIENNES: We were outside Dublin in a beautiful mountain range. It was actually part of the Guinness estate, which has this extraordinary, beautiful lake and cliff.

AX: So there was lots of Guinness on tap for the company?

FIENNES: Yeah, the Guinness is good. It’s a strong beer, it really is [laughs]. We had a great time there. The countryside really is a character unto itself.

AX: Where did you film the interiors?

FIENNES: Ardmore Studio. It’s where they shot EXCALIBUR, I think. John Boorman might even have [filmed] in and around that area, so we’re shooting within sort of the landscape of John Boorman’s EXCALIBUR.

AX: Your brother Ralph Fiennes plays the wizard Lord Voldemort in the HARRY POTTER films. At the risk of asking a very silly question, do you and your brother ever discuss playing wizards?

FIENNES: [laughs] We haven’t actually, no, but I notice we have quite cropped hair. Now that would be a smack-down, wouldn’t it?