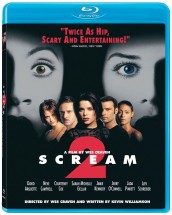 It was certainly going to take a lot to deliver a satisfying follow-up to the surprise hit SCREAM, but by bringing back most of the surviving cast, writer Kevin Williamson and director Wes Craven, SCREAM 2 proved to be a halfway decent horror sequel.

Like the original SCREAM, 1997’s SCREAM 2 follows heroine Sidney Prescott (Neve Campbell) who is now at college trying to reclaim her life after most of her friends were murdered by her boyfriend and best friend.

Sidney has a good attitude about the stalker phone calls and the notoriety that comes with her being a survivor after a bloody small town massacre, but now, with the release of STAB which was based on a book by Gale Weathers (Courteney Cox) about what happened, a new killer has surfaced.

One by one, people start dying around the college campus and it’s up to Sidney, Gale and Deputy Dewey (David Arquette) to once again try and save the day.

Thrown into the mix is Cotton Weary (Live Schreiber) who was originally convicted of murdering Sidney’s mom, but was exonerated after the events of the first SCREAM.

His involvement in the new movie really adds a nice little layer to the mix. He’s clearly an egomaniac and an opportunist, but he also adds some ample conflict between him and Sidney.

Also present is Randy (Jamie Kennedy), the film geek who knows all the rules of horror movies. I still think Williamson and Craven regret offing this character since Kennedy brought so much to the role (and they even found a way to bring him back post-death in SCREAM 3).

One of the more surprising things about SCREAM 2 is the level of craft Craven puts into every suspense sequence. Every thing is amped up to a whole other level. One sequence is set in a sound proof recording studio at the school and it’s quite terrifying. Meanwhile, a school play is used to ample effect as well.

Suspects are plentiful in SCREAM 2 and we’re never quiet sure where all this is leading to, but like SCREAM 3, the reveal of “whodunnit” is probably the weakest part of both films.

The special features on the Blu-ray are quite good (pretty much imported from the DVD release from ten years ago). There is also commentary with Craven, producer Marianne Maddalena and editor Patrick Lussier, deleted scenes with optional commentary (nothing special here), a pretty lengthy outtake reel (which is quite good), some featurettes, trailers and a high definition widescreen presentation.

It would have been nice to have some retrospective features on the franchise – after all they just shot SCRE4M – couldn’t we get something new from the principal actors and Craven? Still, considering this Blu-ray release has been a long time coming, fans of the franchise will be more than pleased to own all three films of the SCREAM franchise in the preferred geek format.