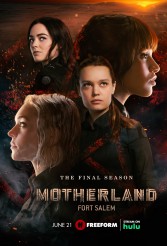 The scoop on the final season of the Freeform witch series 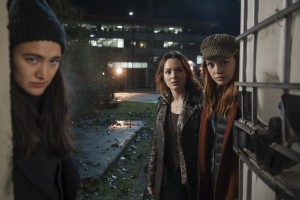 MOTHERLAND: FORT SALEM launches its third and final season on Freeform on Tuesday, June 21, with more episodes airing on the network on subsequent Tuesdays.

In MOTHERLAND, created by Eliot Laurence, we are in an alternate future, where witches (both women and men, though male witches are rarer) are a distinct race at the forefront of every country’s magic-using military. Our main characters Raelle Collar (Taylor Hickson), Abigail Bellweather (Ashley Nicole Williams), and Tally Craven (Jessica Sutton) bonded as cadets at the witch military academy Fort Salem, and have evolved into a powerful fighting unit.

However, Season 2 saw the rise of the virulently anti-witch organization, the Camarilla. By Season 3, the Camarilla has thoroughly infiltrated the U.S. government. U.S. Vice-President Silver (Victor Webster) has framed the unit for the murder of his daughter, which he committed himself, in order to further the Camarilla cause.

Meanwhile, former Army leader General Alder (Lyne Reneé), who died at the end of Season 2, may not be as irrevocably gone as we previously believed.

Creator Laurence participates in a Zoom session with four journalists to discuss all things MOTHERLAND Season 3.

For starters, once Laurence and the other creative producers knew that MOTHERLAND would end with Season 3, did they have enough time both behind the scenes and in narrative terms, to complete their story in a satisfying manner?

“The nice thing is that they even did it this way,” Laurence says, “A lot of shows don’t get the opportunity to get their head around wrapping up a series and ending things in a way that hopefully is satisfying. So, first off, we were very lucky that Freeform handled it in a very dignified, human way.”

Laurence reminds us that, before he developed MOTHERLAND as a TV series, he had started writing the concept as a series of (so far unpublished) novels. “I planned out a bunch of books, and much of the stuff from those loose book plans has been poached for Seasons 1 and 2. But I had an end in mind.” Season 3 involved moving that ending forward “considerably, and I was really worried that that would just seem wrong, but it actually galvanized the season, and everything else was already smoldering. It just set everything on fire, and gave us a scary pull towards the finale, which was cool.” 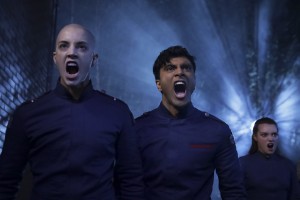 The Raelle/Scylla romance has developed its own fan following within the larger MOTHERLAND fandom. What can Laurence tease for where that relationship is headed? “I shouldn’t even be this explicit about it, but yeah, it’s going to be all right. We don’t want to hurt anybody’s feelings about those two anymore. I’m not going to promise you a safe season for them, or a chill season for them, but there’s beautiful stuff coming down the pike for them, absolutely, and I think it’s going to make people pretty happy.”

Season 2 was rough for everyone all around, but at least Raelle now has Scylla, and Abigail has both Adil with her, and, back at Fort Salem, her mother, General Petra Bellweather (Catherine Lough Haggquist). Tally lost her mother figure Alder, and though her unit sisters have her back, she is in some ways alone. How is Tally coping at the start of Season 3?

“In the absence of Alder,” Laurence relates, “Tally is having a bit of a mother thing with Nicte, who’s along for the ride with them in their fugitive life. And we see some of the dynamics with Nicte that she had with Alder. We see Tally working through this mother stuff that eventually, in this season, she’s going to actually work out with her real mom – slight spoiler there. But that’s where she is at the beginning. But mostly that’s all just where they’re just trying to survive, and adapt to where they’re at.”

Then again, we see in the Season 3 premiere that Alder isn’t entirely absent after all. What can Laurence tell us about that? “I love that I can say a little. We know her story’s not at an end. We know she was getting a little tune-up underground with Mother Mycelium, right? So, she comes back on a mission. This season is such a rich opportunity to get deeper into what witches really are. We have this pre-history flashback that opens this season. Alder is going to be on a quest for that very song that you saw the pre-history witches singing in the opening of the premiere. It’s a song that could end or change the world, depending on how it’s sung. And the Mycelium needs the remnants of that song, which are held by living people, by stewards. So, Alder’s on that quest for the whole season, and that story of this first song, not only does it really unpack what witches actually are, and what they did for humanity, it ties into this apocalyptic event at the end of the season that is very intense.”

MOTHERLAND is in large part about family, both birth and chosen. What would Laurence hope that we take away from what the series has to say on the subject?

“In the case of our unit,” Laurence replies, “it is a found family, or a constructed family, but just to never underestimate how powerful those groups can be, and how, in some cases, for a lot of queer people, these constructed families are really more of a family than the birth family. I think there’s a bit of that with the relationship of our three leads. There’s just this sisterhood that keeps getting stronger, and it’s challenged and it’s threatened, but it’s just something that they can really rely on, the way people rely on family.” 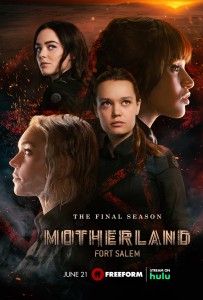 The Spree has a type of magic where its practitioners can change their faces, but none of our fugitives, except Nicte, use this. Why not?

Laurence explains that non-Spree witches “were indoctrinated from the time that they were kids that the Spree is the ultimate in evil, and especially for a military aristocrat like Abigail, it’s just so deep in her blood and her bones that that Spree stuff, Spree magic, Spree workings, is just dirty. It’s a little less so in terms of Tally’s family, but a lot of people have a lot of unfinished business about the Spree. Certainly, Raelle as well, and Scylla. So, I think it’s just the association with the Spree, first of all, but painful baggage, in other ways.”

The production reason for the characters refusing the change their faces, Laurence adds with a laugh, is that nobody wanted to deprive the leads of screen time by having other actors play their roles. “Because you fall in love with people, and you’ve got to have your people in the show. [There is a] multilayered reality there.”

In fact, Laurence says there are virtually no actors he wanted that MOTHERLAND didn’t get. “I’m not trying to sound Pollyanna, or too nice or anything, but we got everybody we wanted. We got such great people. Just to work with Sheryl Lee Ralph, to work with Michael Horse this year, to work with our incredible BATTLESTAR: GALACTICA brilliant actors, Kandyse McClure and Aaron Douglas, we just were able to get such incredible people. So, short of Michael Fassbender for the Witchfather in Season 1, I think I’m at peace,” he laughs.

There are tragic parallels between storylines in MOTHERLAND Season 3 and real-world events. Is Laurence trying to steer into or away from those similarities? “I tried to be almost purposefully obtuse and weird about that. I never wanted too directly to pull an idea in and put it onscreen. What happened instead is just the weird filtering of stuff that I think about, and stuff that percolates in my head. But there have been a number of uncanny parallels. There’s one I’d love to talk about, but it’s a bit too spoilery, in terms of the invasion of a sovereign nation. I never want to be too instructive, but I just try to let it infuse [the viewer’s awareness], if that makes any sense.”

The antagonists in MOTHERLAND are drawn somewhat more starkly than the protagonists. Since the antagonists have a genocidal, repressive agenda, did Laurence want to avoid making it look like he was saying, “There are fine people on both sides”?

Laurence says that he doesn’t want it to seem that “there’s an angle that they want that’s the more reasonable version. It’s a bit of that, although I don’t like to render enemies or antagonists in a cartoony way that’s easy to dismiss. [But] there’s nothing redeemable in their genocidal campaign. There’s no rational angle to it, so yeah, they’re pretty much one hundred percent bad. If they’re drawn starkly, it might just be a matter of, at the end of the day, we have thirty-nine minutes of storytelling, and we have so many characters to service, it’s hard to give everybody their due. And so, I think that’s what’s contributing to that quality that they have, but we’ll find some dimension in them this year. We’ll start to understand the sick relationship between Kara Brand and Alban Hearst [Bob Frazer], and we’ll even see Silver fail to even be steadfast in his evil; he’s that weak. So, we’ll get some more dimension to our Camarilla people this year.” 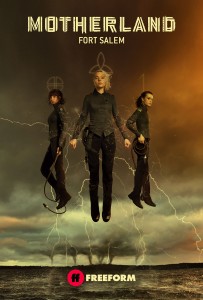 Does Laurence have any favorite memories from his time making MOTHERLAND? “Wow. That’s a hard one. I think it was a production-related story. It wound up on screen in a really fun way, but the thing that makes it a story is the production side of it. So, there was a day in Season 1, I think – it was when Alder puppeteered the President.” This is a scene where Alder, long-distance, forces U.S. President Wade, played by Sheryl Lee Ralph, to voice the words Alder is speaking. “We were shooting Sheryl Lee Ralph’s side of that scene that day. Due to some miscommunication – sets are wild places, and there’s a lot of room for error in terms of people being where they’re supposed to be – nobody could find Sheryl Lee Ralph. And it was a panic, because you’re always against it when you’re shooting. And then we finally got her. She walks on set, and gives it to us in one take. To see that level of talent, and have that be your job, is pretty awesome. So, that’s probably my favorite MOTHERLAND story – just in one take, just, ‘Boom!’ Incredible.”

What are Laurence’s plans for his own creative future? “I’m thinking about a horror project, but kind of like I did with MOTHERLAND in terms of flipping witch-hood, and bringing in a whole new angle with the military and everything, I’m trying to flip this idea of demons and what we demonize, and ask the question, ‘Wait a minute, don’t people do some pretty awful things,’ and ‘Who’s a demon, anyway?’ It feels a bit maybe a bit darker, although MOTHERLAND certainly has a lot of darkness, a bit more adult, a bit stranger, and maybe even a little bit funny.”

Laurence thinks there is definitely more MOTHERLAND mythos to explore beyond the MOTHERLAND: FORT SALEM series. “I would love a prequel, I would love an American history textbook from the MOTHERLAND world, like I want to get into all of that stuff. There is more to tell here, I think.”