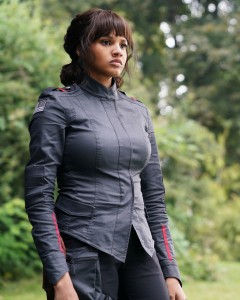 Ashley Nicole Williams plays Abigail Bellweather, a young witch of impeccable military pedigree and great ambition. Over the course of the first season, Abigail came to bond with the other two young witches in her unit, Tally Craven (Jessica Sutton) and Raelle Collar (Taylor Hickson). How, the three are together at War College, preparing to take on the threat posed by the Camarilla, a violently anti-witch organization.

Williams, originally from Dallas, Texas, previously starred in the feature film SHEPARD. In an exclusive Zoom interview, she talks about the magic of working in MOTHERLAND: FORT SALEM.

ASSIGNMENT X: What did you know about MOTHERLAND in general and Abigail specifically when you first got involved with the series?

ASHLEY NICOLE WILLIAMS: Well, I had the pilot script, which was amazing, so when I was first auditioning for it, I read it, and I literally ran to my mom, and I was like, “I have to be a part of this. This is so good.” [When] I got further in the audition process, they gave me a breakdown of her character arc, of what Abigail would go through, throughout the whole [first] season. And I think those were the things that I had. But we [Williams, Hickson, and Sutton] got to have a little session with Eliot, before we had our screen tests, so that was cool. Any questions that I had, I could ask him. The whole world of MOTHERLAND is in his brain. Literally, he has it. If you asked him [what will happen in the show] six years from where we are right now, he could tell you. So, that was really cool.

AX: Did you go up for any of the other characters, or was it always Abigail?

AX: And what to you is the core of Abigail’s character? What’s most important in playing her?

WILLIAMS: I think the most important for Abigail, in her core, is her determination. It doesn’t matter what anyone tells her – if she believes in something, and believes that she can do it, she’s going to do it, and she’s going to fight to get it done. That’s her biggest thing. I think she has a very hard exterior, and I think her biggest downfall is that she fights hard to not be human, and to not feel things, and be vulnerable. And I think she’s learning through that, but she wants to be this leader, and this warrior, and this kickass, badass person, but she needs to realize that, in order to do all those things, you need to break those walls down, and let that vulnerability seep in.

AX: Did you have to learn how to do anything in order to play Abigail, like fighting technique, or – is there a word for how the witches in MOTHERLAND applaud with their feet?

WILLIAMS: [laughs] Oh, the stomping? We just stomp. It’s like our clapping. But in terms of the fighting and the stunts, we have a stunt coordinator, Ernest Jackson, and we trained with him before this season. So, all of the scourge movements [the scourge is a thick, whip-like weapon] and all of that, we go over those techniques. It’s roped art – that’s the ancient roped art technique that we use. But if we have certain fight scenes coming up, say, like in the first episode, we’ll choreograph those things. And each time before we have a fight scene in a season, we’ll go over the choreography with Ernest and our stunt doubles, and we learn it, and we really do train, though. It’s some kickass stuff, it’s some hard stuff, but we do train.

AX: Did you have to learn how to go up on flying wires, for when the witches are flying and doing jumps without parachutes out of helicopters?

WILLIAMS: Yeah. We had some rehearsals for it – we put a harness on, and they’d take us up. But basically, they’d take us up, and we flipped over like we were coming down on a little incline, and it was really cool. I had never been on a wire before, so at first, I was like, “Oh, gosh, what is going on?” But then I was like, “Ashley, it’s just like a roller-coaster, it’s not [life-threatening].” 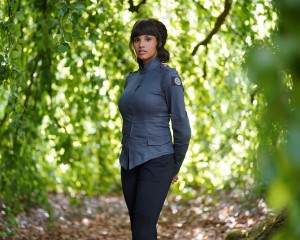 AX: Sound magic and voice magic are big parts of witch power in MOTHERLAND. Did you have to learn how to do anything for the vocalizations?

WILLIAMS: A lot of us can already sing, which is really, really cool. But we do have a vocal coach. His name is Frederik Robert, and he comes on set. Our sound designer will send him what the seeds [the basis of the witch vocalizations] or whatever we’re supposed to be doing should sound like. We will do that to the best of our abilities, and they’ll integrate the sound that we do on set with what they have already made. So, we do have a vocal coach any time that we’re conjuring up a storm, or doing a seed sound. And he doesn’t even just coach our singing abilities. It’s what we’re doing, how we hold our mouths – if it’s in an O formation, or anything like that. So, it’s really cool. We have a lot of great people who help out during this.

AX: Did you sit down with Taylor Hickson and Jessica Sutton, who play the other members of Abigail’s immediate unit? That is, have the three of you done any sort of bonding off-set to look more like you’re a unit on set?

WILLIAMS: Yes. The funny thing is, we didn’t have to do off-set bonding. We immediately met each other, and just [snaps fingers] everything clicked. I think both Taylor and Jessica, they tell this story, the first time they met me, one of them licked my face, and the other licked barbecue sauce off my pants, at the same time. [laughs] So, we were close from the very beginning. Obviously, we do hang out outside of set as well, but we didn’t have to do a team bonding thing, it was really just like fate and destiny that we had such great chemistry, really.

WILLIAMS: Cat is amazing. She’s a phenomenal actress, and she really is like a mother figure in real life to me. Any time I need anything, she’s always there. I remember this one day, I came to set, and it was a pretty emotional scene, so I’ll come already kind of weighed down and in it, and she’s like, “Honey, what’s wrong, are you okay?”, and I’m like, “Cat, do you remember the scene we’re shooting today?” [laughs] But she’s amazing, and that bond is great. I’m thinking of some scenes that happen this season, but I can’t tell you.

AX: Speaking of emotional scenes, one of the more complicated emotional reactions Abigail has is to the death of Libba Swythe [played by Sarah Yarkin], her lifelong rival, who she loves exchanging insults with and competing against. How was that scene to play?

WILLIAMS: That was hard. We [Williams and Yarkin] got very, very close. So, to shoot that scene [of Abigail grieving over Libba’s body] – and it was her last day as well, her last scene, she’s dead in the helicopter. It was all too real. But it was really fun, going back and forth in bickering with her the whole season, because we weren’t like that outside of the show. We’d break and laugh, because to call someone a “dumb, noodling neigh-neigh horse from a dumb, noodling, nobody family,” and you actually don’t think they’re dumb or a neigh-neigh horse is just funny [laughs]. It was cool, it was great.

AX: And what would you most like people to know about Season 2 of MOTHERLAND: FORT SALEM?