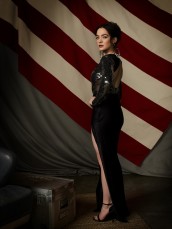 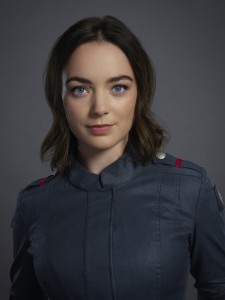 MOTHERLAND: FORT SALEM, in its first season Wednesdays on Freeform (thereafter available on demand and on Hulu), takes place in an alternate version of our world. In MOTHERLAND, created by Eliot Laurence, witches are not only real but are the main military force of countries across the world. Most witches are women. In the U.S., those who have powers are sent to study warcraft at the military academy Fort Salem.

In MOTHERLAND, the enemy of most of the world’s governments is the Spree, a terrorist organization seeking to overthrow the ruling order by any means necessary. In the opening episode, we saw young Spree agent Scylla, played by Amalia Holm, kill fifteen hundred people with a bomb and no guilt. Scylla is both a shapeshifter and a necromancer (that is, she can do magic with the dead) who infiltrates Fort Salem. There she becomes romantically involved with fellow cadet Raelle (played by Taylor Hickson).

Holm, who is Swedish, has had major roles in many Scandinavian productions. She’s also been in PLAYGROUND and THE GIRL IN THE SPIDER’S WEB.

Holm says she is excited as each new aspect of the MOTHERLAND universe is revealed to the cast. “It’s so intriguing. I mean, we were all just sitting on our toes for every new episode, to find out what he [Laurence] will do next, what detail will tell us so much about this history. For example, you would go and you would say, ‘Oh, Goddess.’ Because in this world, female witches have had the monopoly on violence for all those years and that will, in one way or another, affect who is in power, and whose power will inform the norms.”

ASSIGNMENT X: Where are you from initially?

HOLM: Oh, it’s fun. It’s so much fun. I don’t think I have another English[-language-based] accent, it’s not like I’ve got a British accent or something, so it’s basically, this what I’ve got, and I’m working on it [laughs].

AX: Your character Scylla is a shapeshifter, which means in production terms that sometimes Scylla is being played by another acress. So do you and the other actress playing the other version of Scylla have to look at each other’s mannerisms?

HOLM: Yes. I’m able to shapeshift into whoever I need to. So there are several actresses who have been playing me in different ways, and I made sure to talk to them, and get a chance to talk with them. I often don’t find out about the casting until on the day, basically, or the day before. I try to get in touch with them to see if they needed to run things through with me. And some did, some did not, some wanted to do their own thing. Dana Jaine, for example, who does the first one, she did it very individual, because that was shot even before I started working, I think.

AX: She’s the Scylla who blows up … 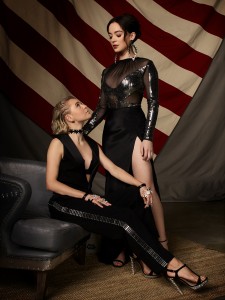 AX: Obviously, when Scylla is shapeshifting from one face to another, that’s a very cool visual effect, but how do you feel when you’re doing magical actions on camera? Do you feel like, “I’m really doing this,” or do you feel like, “What does this look like?”, or …?

HOLM: There are so many different versions of what we can do. One is the shapeshifting, and already in the pilot, Episode 1, you’ve seen me go flying with Taylor when we take this magical drug, you could say, or tool, salva. And that was amazing. And you need to be a witch to be able to practice that, even. And then other than that, I have some magic that’s being carried out through sounds. Just because sound is so grounded in yourself, I felt like, “Yes” [laughs], I was doing a little magic. Because it’s not a wand you just swing on and then something happens, it’s rather something that you need to organically pull out of yourself, create some kind of edgy sound. There’s a magic trick I’m doing in Episode 2 already, that is just a beautiful, profane sound, and it sounds medieval, like a medieval church melody. I’m a Necro, which means I work with the dead.

AX: When Scylla is raising, or talking to the dead, how long have they been dead?

HOLM: The specifics of it differ a lot. There are some things I can do with freshly dead things, animals and people, and then you need to be taught it, so I go to a different section of the school [than the other main characters do], with the Necro teachers. And they have very advanced [techniques]. For example, during the Beltane, when all of this sexuality stuff is happening, that charges the entire school, the entire base, and makes an opportunity for the Necro section to actually resurrect someone from the dead. And that is scary, because I killed him.

AX: Does Scylla sincerely believe that what she’s doing is for the good of the freedom of the populace, or does she just want her side to dominate the other side?

HOLM: Oh, she’s one hundred percent in it for the cause. She’s an idealist, and she one hundred percent believes that the system, as it is today, is marginalizing the existence of witches. They can’t live freely; their lives are just set up to be cannon food, and that is horrible. And she’s working for a paradigm shift.

AX: Does Scylla feel actual affection for Raelle in their affair, or is she just using her?

HOLM: Well, in the first episode, I would say, she knows her toolbox, and she knows, “Okay, there’s an opening here for going that way.” The seduction seems to go the right way, and then all of a sudden, this person is not who I thought she was. She’s pretty interesting. And Scylla has dedicated her life to this cause, kind of saying there’s nothing else that she lives for. And as her feelings are deepening for Raelle, there is actually something that she’d like to live for. And that complicates her whole mission.

AX: Does she feel any guilt about the things she’s been doing? Or does she just think, “Well, these people were complicit in the suppression by not actively fighting against it, so they have it coming”?

HOLM: Well, she killed civilians in the first episode. And the way she is now in her beliefs, civilian lives – so many witch lives have been taken throughout the years because of the system, so that one thousand, three hundred civilian lives have to go now is just fair. It’s an eye for an eye, in her opinion. And then, her engagement in the Spree doesn’t really cost her anything. Everything’s going very smoothly. She’s getting hubris from it. But eventually, things will start to cost her. And when she has to end a witch life, that is a breaking point for her in one way. So that’s what’s causing a doubt, I will say. 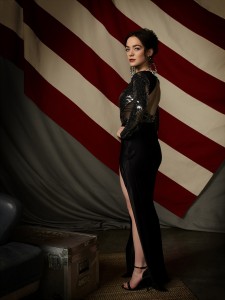 AX: Did you come to North America to do MOTHERLAND, or were you already working here?

HOLM: I came over to do this show, so this is all very new. This is my fourth time in Los Angeles.

AX: How are you enjoying it?

HOLM: Oh, so much. The first two times, I was confused about the construction of an American city. I’ve been to New York before, but that’s its own deal. But the third time, this fall [of 2019], I felt it.

AX: Where does MOTHERLAND shoot?

HOLM: We shoot in Vancouver.

AX: So that’s a whole other city to explore and absorb …

HOLT: I have a few series coming out in Scandinavia. I have one called THE LAST SUMMER, a Swedish one, and then I’m working on a series called DELETE ME.

AX: And what would you most like people to know about MOTHERLAND: FORT SALEM?

This interview was conducted during Freeform’s portion of the Winter 2020 Television Critics Association (TCA) press tour.