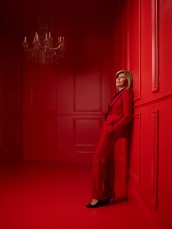 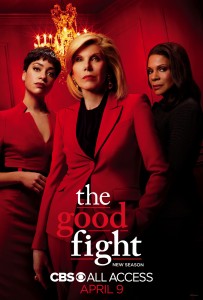 THE GOOD FIGHT premieres its fourth season Thursday, April 9, on CBS All-Access. Spun off from THE GOOD WIFE, THE GOOD FIGHT is set in the world of law and politics. Christine Baranski stars in THE GOOD FIGHT, reprising her GOOD WIFE role as Diane Lockhart, a white lawyer who, in THE GOOD FIGHT’s opening episode, joined a predominantly black law firm.

Married writers/executive producers Robert King and Michelle King created THE GOOD FIGHT with Phil Alden Robinson. The duo previously created THE GOOD WIFE, as well as CBS’s EVIL, which is due back for its second season in the fall.

Both Kings are on a Q&A panel with THE GOOD FIGHT cast members Baranski, Cush Jumbo, Audra McDonald, Delroy Lindo, and Nyambi Nyambi. Robert King makes an opening statement, and then the panelists take questions from the assemblage. When the session is over, King answers some follow-up queries. Note that this took place in January, before the spread of COVID-19.

King begins by addressing the room. “We wanted to tell you a few things about this coming year. The show is not going to lose any of its political sense. That seems to be the niche that we found ourselves in. We have a new cast member this year, Hugh Dancy, who will be joining [as] one of the lawyers of the firm this year. Michael J. Fox, who was on THE GOOD WIFE, will be in this year. Zach Grenier, who played David Lee [on] GOOD WIFE, will be a regular this year. Oh, and John Larroquette. I should say the show is concentrating on some of the issues that come out of big mergers, very contemporary issues, and some of the things that are going on in the political world.”

Regarding other dramatic developments on THE GOOD FIGHT this season, King says, “We are always being affected by how much the universe, or business universe, in America is merging – obviously Disney/Fox, even CBS, that everything is becoming a bigger conglomerate. So the law firm Reddick Boseman was in such bad straits, they have now been bought up by a very large international law firm, who kind of want to buy diversity. They don’t have enough. They took a yearbook shot of their lawyers, and they realized there were almost no African-American faces in it. So there is what we are calling the overlords. It’s this large conglomerate that has bought us up and has created a new working space for us that is not our personality, but sort of their personality, with a staircase that goes up to what we are calling a Nirvana universe. So basically, it is our people who have control of their own fates now being underdogs, being controlled by other people. It feels like it reflects so much of what’s going on now. What’s described as synergy just means you are f***ed, you are laid off. So I do think there is that sense of, we are all agitated by this gathering together of large, Amazon-like forces that control and want to control what we say and do and teach.” 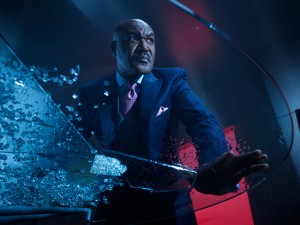 Asked for more specifics on THE GOOD FIGHT’s handling of political topics this season, King replies, “Michelle and I were talking about how, when you’re growing up, you think [if you receive] a subpoena, you have to go. And one of the things I think we’ve learned over the last few months – you really don’t have to go. Just forget it. Just stick it away, like you would a jury summons. So this year seems to be an understanding about how some of the rules have broken down with regards to the law and how things that we always expected, like not perjuring yourself, are being bent a little bit, especially if you’re rich or powerful. So one of the things we want to explore this year is how those rules [are being ignored]. If you’re playing a tennis game, and someone lets down the net, there aren’t any rules left, so that’s difficult for a law show, because the law – you see TO KILL A MOCKINGBIRD, you see the verdict. You see all these movies that are brought in the courtroom. They all respect a certain element of understanding, an agreed understanding, of what we need to do as servants of the law. So one of the things we’re looking at this year is how the current administration is changing our understanding of what we need to do.” 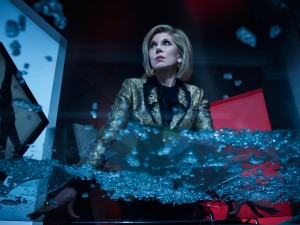 THE GOOD FIGHT often seems to anticipate real-world developments. King explains, “We have some experts advising on the show, but the writers’ room, which is made up of some of the most sophisticated people we know. At a certain point, you’ve got to lay down your bet that the world is going to be a certain way by the time you get the show there, and that bet is not as problematic the closer you get because, further in the season, there’s less of a production time between then and when the show is on the air. But the beginning of the airing, you are always betting that in five months, four months, the world is going to stay the same, and it’s been a hard bet to make these last four years. There have been ways the world has changed, but there are some evergreens in it, some perennials – anti-Semitism, racism – that you can always write to.

“I think this was a harder year because, I think the second day of the writers’ room [opening], Nancy Pelosi announced the impeachment move. So we didn’t know where the country’s idea of itself would be. We pretty much thought the current president would still stay president, but we didn’t quite know. So there are some thought experiments early in the year that we laid our bet on that they were going to continue to be interesting. Obviously, #MeToo was going to be interesting. Weinstein was going to be interesting. The show seems to kick around a lot of ideas, not just Trump. Like with Cush’s ‘Mothering While Black’ episode last season, there were all of these issues of selling lemonade while black, or things like that. We thought it would still be an issue.”

ASSIGNMENT X: Do you have a strict separation of subject matter between THE GOOD FIGHT and EVIL, or might THE GOOD FIGHT tackle something that has been on EVIL – for example, technology companies that make products that spy on you?

AX: But are there topics that can cross over between the two?

KING: Definitely. Because the obsessions are still the same. We’re obsessed with technology and people behaving badly.

AX: How are you and Michelle King dividing your time between the two shows, and are you working on a third show?

KING: We are working on a third show, called YOUR HONOR, with Showtime [starring Bryan Cranston]. It’s crazy, but we’re working from end of June through December on EVIL, and from October through April on GOOD FIGHT. So there’s an overlap of two-and-a-half months, which have been very hard. I don’t know. We have to figure out a better process. You need at least a month to get away and not do anything, or you start to go insane. 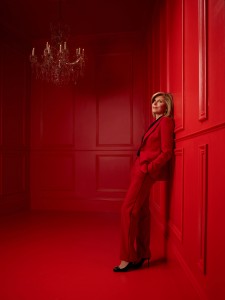 AX: THE GOOD FIGHT deals with stories that are in the news. Will you be dealing with any issues related to espionage, since that’s been in the news a lot lately?

KING: Not as much, although [at the time of this interview] we’ve only written up until Episode 5, so who knows? It might be in the last half.

AX: How many episodes are in THE GOOD FIGHT Season 4?

KING: There are ten.

AX: Not asking for Season 4 spoilers, but do you have a favorite episode or scene from THE GOOD FIGHT Season 3?

KING: Yes. The episode “Mothering While Black,” the one with Cush. That’s my favorite, because it took so many chances on race. It took so many chances on what is fair salaries, what should be paid, are African-Americans valued less than whites, even by African-Americans within the firm? And I thought it was very honest about those issues. I didn’t feel like it pulled punches, which I thought was fascinating.

AX: When you’re dealing with a subject like racism, do you feel like you’re trying to talk to both sides of an issue where one side of an issue, like excusing racism, is completely stupid, or you’re like, “You know what, I can’t deal with your stupidity”?

KING: [laughs] We’re only trying to talk to both sides of an issue in that, even though it’s a show about progressives, it’s satirizing progressives. So if you were of a conservative mindset, I think you will like it. The only thing that we have difficulty bending what we think about is Trump, who we also think is not a conservative. I’m probably more conservative than Trump, which is crazy.

AX: And what would you most like people to know about THE GOOD FIGHT Season 4?

KING: I think Season 4 will surprise a lot of people, because it’s probably funnier than all the seasons before, and there are a lot of new surprises in the structure. It’s not the surprises of the cartoons and the soliloquies, but it’s the surprises of how you think you know what the status quo is about, and it’s not that at all.

Related: Interview: Michael Sheen talks about the law and angels in his TV shows THE GOOD FIGHT and GOOD OMENS