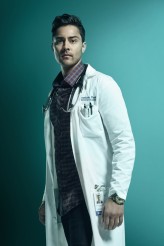 The actor talks Season 4 of the Fox medical drama 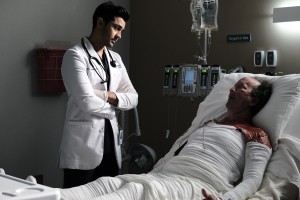 THE RESIDENT is now in its fourth season, Tuesday night on Fox. The medical drama, set at fictional Chastain Park Memorial, began with an exploration of how hospitals cover up malpractice. This season, in addition to storylines about newlyweds – Dr. Conrad Hawkins (Matt Czuchry) and longtime love nurse practitioner Nicolette Nevin (Emily VanCamp) finally marry – the show also tackles the response to COVID-19, both at Chastain and other, less well-funded establishments.

When THE RESIDENT started, Manish Dayal’s character, Devon Pravesh, was a novice doctor under senior resident Conrad’s supervision. Now Devon is a resident in his own right. The fourth-season premiere sends him reeling when his beloved father (played by Brian George), a Queens taxi driver, dies of COVID, alone in a hospital across the country.

Originally from South Carolina, Dayal has worked extensively in films and television. His credits include RUBICON, the 90210 reboot, VICEROY’S HOUSE, THE HUNDRED-FOOT JOURNEY, HALT AND CATCH FIRE, and AGENTS OF SHIELD.

Speaking by phone from Georgia, where THE RESIDENT is in production, Dayal talks about Devon and this season.

ASSIGNMENT X: When THE RESIDENT was picked up by Fox for its fourth season, were you expecting a fourth-season pickup? Was that a surprise? Were you concerned, or did you just think, “We’ve got our groove, and it feels like it’ll come back”?

MANISH DAYAL: I had no clue. Because of the pandemic, we had no idea whether we would come back, where we were on the schedule, if we were going to be on the schedule at all. I think that nothing could have prepared us, but ultimately, we’re here, and we’re so grateful and lucky to be working right now. So, I can only say that it all worked out in the best way. 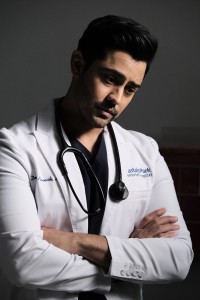 AX: In Season 1, Devon was sort of the designated point-of-view character, and an innocent. Can you talk about how that’s changed over time, and whether you like those changes?

DAYAL: He came into Chastain bright-eyed and bushy-tailed, and new, and hyped up on his academic excellence, and he needed to be taken down a peg or two. And I believe he has [laughs]. Over the course of four years, he’s gotten to some pretty dark places, and of course emerged a new man every time. However, I think this season brings him to completely new territory, as a person, a human being, but also as a doctor. He experiences firsthand [through his father’s death] the repercussions of poor care in the public healthcare system, in an underfunded public hospital, in an underfunded neighborhood that does not get the level of care that a privatized hospital does. And here, we are spotlighting the black and brown disparity in this country with regard to coronavirus and the pandemic.

And I think that that’s a story that is applicable to all of us. I mean, we’re all experiencing this together. It unites us in so many ways, but to talk about how there is sort of an unjust [financial and racial imbalance] in healthcare is something that Devon experiences firsthand, and of course, as a result, it will find its way into how he is a doctor, how he treats his patients. So, once again, he will hopefully and, my fingers crossed, emerge a stronger and even better person for it. I do like these changes. I like playing characters that move, and fall, and shake, and go to very dark places, and go to lows, and go to highs, and find that balance. Because ultimately, that is what will create the character and make them full, because I like to see characters and their loss of innocence, what happens from there.

AX: There are strict COVID protocols on the set, but often you have to take your mask off to do dialogue scenes. Do you have any concerns about unmasking for takes?

DAYAL: Of course. There’s always a level of anxiety in doing that, because that is how you are directly exposed. I will say that we have a very rigid testing schedule that, at this point, has been, knock on wood, successful, and we’re just all relying on that, and trusting in that system. I think that if we’re all disciplined, and aware of the scenario, and helping to take care of each other, on set and off set, we can be successful in mitigating that level of risk. But yes, there’s no doubt that taking off your mask during a pandemic is not a simple act.

AX: THE RESIDENT is a medical show which is talking a lot about COVID-19 right now. Do you feel there’s like a public service aspect to this season that maybe wasn’t so much in previous seasons?

DAYAL: No, I don’t think so, because I think that THE RESIDENT has always worked to serve and reflect the world the world that we’re all living in, and it does so in a way that tries to spotlight all perspectives. And I think that’s just storytelling, that’s within any story. For us, it’s just so happens that we are a medical drama, talking about coronavirus, the thing that’s on everyone’s mind right now. So, I think that, of course, this scenario of this pandemic is unique for the show, but in terms of how we’re telling the story, and for what purpose, I think that has always been the same. 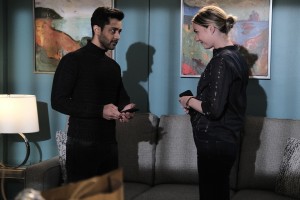 Manish Dayal as Dr. Devon Pravesh and and Emily VanCamp in THE RESIDENT – Season 4 – “Moving On and Mother Hens” | ©2021 Fox /Guy D’Alema

AX: Are you going to miss the father/son interactions between Devon and his dad?

DAYAL: Of course. That was always fun. We only shot one other episode between us, so in those interactions, it was fun to explore what their relationship was like, and how it was unique. In this episode, it was steeped in this tragedy, but in that final scene with Devon [where the two are speaking a computer video call], in a minute or so, communicating to his dad what he meant to him, what he meant in general, Devon had to quickly articulate to his dad all of those things, the legacy he leaves behind, how meaningful that is, what his life means to his son. Devon says, “You put me through medical school, you did everything for me.” So, Devon feels a great responsibility to honor his father, to do good work, as the legacy his father would have wanted.

AX: Was it difficult doing that scene to a computer screen rather than another actor?

DAYAL: Well, we actually filmed it live. A guy was speaking [the father’s lines] through Zoom. It was definitely strange, because you have to envision what you’re looking at, but technically speaking, you’re actually looking into the eye of the lens. And I’ve done it before, so it wasn’t too challenging, but I was able to really envision what Brian, the gentleman who plays my dad, would look like on a bed hooked up to a ventilator, covered in PPE, and what that would look like. 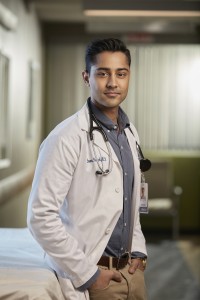 AX: You have a scene in the second episode of this season, where Devon yells at a patient. That’s not something he does often. Did you enjoy that?

DAYAL: Well, it actually relates to what happened with his dad. Devon sees a character enter Chastain with great privilege, a character who has been afforded a level of care that his father could not, a character who could have all the funding in the world, who has been vaccinated, who has been taken care of by society. Whereas his father died alone in a public hospital, without any of this. And the anger that he feels for this patient comes from the fact that this patient lied to him, [which] sends him on a goose chase in terms of figuring out the diagnosis. And Devon realizes that this level of privilege is what was not afforded to his own father, and why he died. So, I think he responds to this character that way because he’s rooted in this idea that we are all responsible to take care of each other during a pandemic. So, privilege and access [should] not allow you to take advantage of the system. 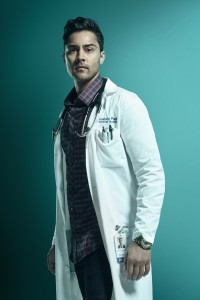 AX: In the first season, Devon was horrified by the medical malpractice committed by Dr. Bell, played by Bruce Greenwood. Has Devon made his peace with Bell?

DAYAL: I think he has found peace within that character. There have been scenarios that he’s been privy to that helped make the Bell character more forgivable. I think what does remain is that Devon doesn’t see similarities in himself with Bell. They’re very different doctors. I don’t think that that means that Devon won’t work with him, or that he dislikes him, but there’s a recognition that they are two very different people.

AX: What would you say are Devon’s most significant interpersonal relationships right now on the show?

DAYAL: I would say his friendship with Conrad is a big one. They have a very close relationship that began as a professional mentor/mentee relationship, and they grew over time together. They have very different brands of doctoring, if you will. I think that it’s only been through discovering their differences that, ultimately, today, they’re very close.

AX: Are you looking forward to Devon having a romance, or are you going, “Please, no kissing scenes during COVID”?

DAYAL: [laughs] There may be a romance coming up very soon. Somebody from Devon’s past could come back, or somebody entirely new. We’ll see. We’ll see what the fans want. We’ll see what everybody has n store. Maybe Devon is just going to remain a single man this season. Who knows? I certainly don’t know yet.

AX: And have you had to do any more research over the seasons in order to do anything medical with more expertise onscreen? 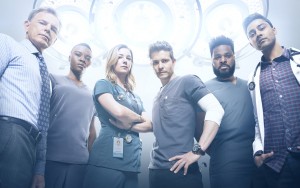 DAYAL: Funnily enough, there was the central line that I had to do in the pilot, which then I had to recently do again in an episode, [shot] a couple weeks ago. And I had to relearn it, and figure out how to do it again, because I hadn’t done it in four seasons. I had not remembered how to do it, so the medical adviser helped me.

DAYAL: Well, I just had a really fun Netflix movie called HOLIDATE, and I did an animated series for DreamWorks called FAST & FURIOUS SPY RACERS, it’s a kids’ show that was great, and a lot of fun. And that’s it right now. Maybe I’ll have something new to share soon.

AX: And what would you most like people to know about Season 4 of THE RESIDENT?

DAYAL: That it is one of the most powerful and explosive seasons we’ve ever done. I think that fans are really going to find it fulfilling. And we are all very grateful to our frontline workers and healthcare workers who made it possible for all of us to go back to work.