The actress also talks THE AMERICANS 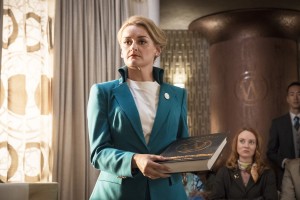 TNT’s SNOWPIERCER is now in its first season on Sunday nights and renewed for a second. Adapted from the graphic novel and the Bong Joon-ho film of the same name, SNOWPIERCER concerns an enormous train that carries what’s left of humanity in a continuous race around an Earth beset by a new Ice Age. The train cars are divided by social class, with the powerful up front and the impoverished in the back. However, when a murder is committed, influential hospitality coordinator Melanie Cavill, played by Jennifer Connelly, brings detective Andre Layton, played by Daveed Diggs, from the rear of the train to investigate.

Alison Wright plays upper-class train resident Ruth Wardell in SNOWPIERCER. The series was famously reconceived after its original pilot was shot and scrapped. New SNOWPIERCER show runner Graeme Manson (co-creator of ORPHAN BLACK) came aboard, and all of the contracted actors found themselves playing new characters in a reconfigured storyline. Wright initially portrayed Lilah Anderson, still a front-of-the-train person, but with a different purpose.

Wright, an English actress, did a flawless American accent in her five seasons on THE AMERICANS as F.B. I. employee Martha Hanson, which earned her an Emmy nomination. THE AMERICANS originally ran for six seasons, 2013-2018, on FX. The entire series, created by Joseph Weisberg, is now available on Amazon.

Set in the early ‘80s, THE AMERICANS stars Keri Russell and Matthew Rhys as a couple known to everyone, even their two children, as Elizabeth and Philip Jennings. They and the audience know that they are actually KGB spies for Russia, embedded in suburbia adjacent to Washington, D.C. After fifteen years together in their arranged marriage, Philip and Elizabeth are actually falling in love with each other, but their work continually forces them to take on new identities and play out relationships with targets. In Philip’s case, his cover as nerdy Clark leads him to seduce Wright’s Martha, and eventually marry her (when Martha meets Elizabeth, she thinks Philip’s wife is Clark’s sister).

At a Q&A session for SNOWPIERCER, Wright discusses her work on the action/mystery. In a separate interview, conducted while THE AMERICANS was still in first-run, she talks about playing Martha.

Asked to describe Ruth Wardell in SNOWPIERCER, Wright says, “My character works with Melanie in hospitality and her week to week is helping everything run smoothly on the train. She’s a huge fan of Mr. Wilford [played by Sean Bean], thinks he’s the bee’s knees, and will do whatever he asks her to.” 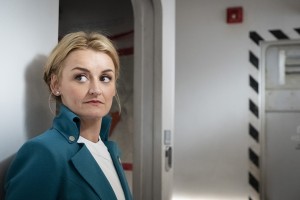 How does Wright feel about SNOWPIERCER’s claustrophobic setting? “I’m totally ambivalent about trains.”

Addressing the massive changes that have occurred with the SNOWPIERCER series since she joined it, Wright says, “It was pretty great in a sense of getting to shoot that pilot twice in a sense. That we got a goal, and then we got another goal. When does that happen, unless you’re in the theater?”

Diggs, also on the panel, agrees. “That’s what I’m saying. You have previews, and you change everything.”

“Yeah,” Wright concurs. “So that was pretty exciting, for Graeme to give me this character that I was so excited about, and I think is a great linchpin of a type of person to have on the train. So that ended up being a great thing.”

ASSIGNMENT X: In THE AMERICANS, Martha is pretty patient with Clark’s evasions and eccentricities, but do you think her breaking point would be if she found that “Clark” is actually married to Elizabeth?

ALISON WRIGHT: It could be. I looked into Judith Ridgway a lot. She was the wife of Green River serial killer Gary Ridgway. He of course had confessed to at least forty murders, and she was married to him for seventeen years, he said it could have been upwards of ninety, and when all of these things finally came into view for Judith, the wife, the thing that she got most upset about was that he was having sex with these women. Not that he’d murdered them – the first thing that really got her gall was her horror and sorrow that he was having sex with somebody other than her. So yes, I think that is valid, that if she were to find out about Elizabeth, that could be the breaking point and not all the other stuff.

AX: What led you to Judith Ridgway as a focal point for research?

WRIGHT: I was trying to find something that would possibly be as huge as the things that Clark lays on Martha, the equivalent of what could be as big as that, to find out that your partner was anything other than you ever thought they could be, and that seemed to be a good extreme to start at for such a dramatic revelation.

AX: At Clark’s urging, Martha started doing some FBI office spying for him. Was she doing this only for the love of Clark?

WRIGHT: [laughs] As opposed to maybe she’s turned on by the idea of [doing espionage herself] and all that stuff? I don’t think she’s that far developed in those senses. No, I think that she’s in this relationship that she wants to keep, with a man that she loves, and he’s her husband, and she wants to hold onto it and, God knows, people have done crazy things for exactly just that.

AX: Is she at all afraid of Clark?

WRIGHT: I would have said not until the first episode of Season 4, when she finds out that he’s killed somebody. No matter what she thought he was before, she didn’t think he was a murderer. That’s brand-new information.

AX: Do you think it ever occurred to Martha before she got involved with Clark that somebody might get involved with her for her access to the FBI offices?

WRIGHT: No, absolutely not. At the time period that we’re in [the early ‘80s] I think [spies] weren’t that publicized. Even within the community, within the FBI and CIA, those sorts of things weren’t so common. We didn’t know about [sleeper agents] and honey traps. It wasn’t public knowledge. So no, I don’t think she was aware that that was even a thing that could happen to her.

AX: Do you see Martha as someone who was especially vulnerable to seduction?

WRIGHT: No much more so than any person is when they’re single and they’ve been single for a while. I think it’s easy to put yourself in that position, no matter who you are. I don’t think she was a lonely, wasted spinster, no. I enjoy the idea that she did date people, and she did have a thing with Chris Amador [played by Maximiliano Hernandez] and she did have a sexual history. So she’s just a normal woman, but yes, she had sex, and I know that normal women aren’t supposed to do that on TV [laughs], but I like that they empowered her like that as a real person who is not at the top of her game, but she has a sex life, and she has a love life, so I didn’t really approach her like that.

AX: Was Martha’s American accent easy or hard for you?

WRIGHT: It was mostly important for us in the first place to make us think that she wasn’t from the East Coast or the West Coast, she wasn’t from a big city, she didn’t have a distinctive, definite place in anything. It was more important to have her be from the Midwest.

AX: Matthew Rhys is Welsh, and you’re English. When you had scenes together, did you ever find your real speaking voices starting to affect each other?

WRIGHT: We never, ever messed up when we were doing it, but as soon as the camera stopped, we were talking all sorts of ridiculous British accents. I grew up around Newcastle in the northeast of England, and it is a difficult accent to do, and apparently the most difficult of all British accents there are. But Matthew can do it perfectly. So everything we talked about, we talked about it in that accent. But all the crew, it was like they were on a British porn, because they had no idea between takes what we’re saying to each other. And we always thought that we should do a reel of just us speaking in that Geordie accent.

AX: How did you feel about the American early ‘80s costumes and hair? Did you have a moment of going, “Ack” or did you think, “Oh, this is fun”?

WRIGHT: Oh, no, no. I’m a hundred-and-fifty-percent in. They had to pull it back from what I wanted. I wanted leg warmers and sweat bands and pink and purple and yellow eye shadow, and they were always like, “No, no, no, this is not a comedy, let’s pull it back,” and I was always fishing for jumpsuits and side ponytails. I wanted to see her at home, doing her calisthenics to a Jane Fonda record, on the floor, with the leg warmers, and the pink and purple pastels. I wanted all of that, and they were like, “You’re out of your mind. No.”

AX: Was there any of the ancient ‘80s tech that surprised you?

WRIGHT: No, I’m not so young that I can’t remember all of that stuff. And I got a kick out of it. I love it. And our set designers do a marvelous job, down to the pens and pencils and all sorts of weird little vintage stuff that we don’t see any more.