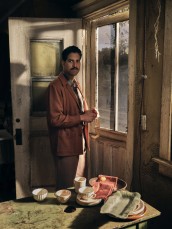 The actor talks about the new Showtime spin-off series 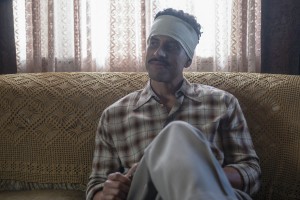 PENNY DREADFUL: CITY OF ANGELS, now in its first season Sundays on Showtime, is technically a spinoff of the original 2014-2016. Both series were created by John Logan, but where the first PENNY DREADFUL was set in 1890s London and the Old West, dealing with classical monsters, PENNY DREADFUL: CITY OF ANGELS is set in 1938 Los Angeles. There is Santa Muerte (Lorenza Izzo), the Angel of Death from Latin folklore, and her demon sister Magda (Natalie Dormer), who takes on many identities as she tries to inspire people to violence.

However, most of the monsters in PENNY DREADFUL: CITY OF ANGELS are human. A wealthy white man, his wife and their two children have been found murdered in the dry L.A. River bed, painted with Day of the Dead makeup. The Latino community is blamed, which suits racist L.A. City Council member Charlton Townsend (Michael Giadis) just fine. As his assistant Alex (Magda in disguise) suggests, he can use the outrage to further his cause of building what is now the 110 Freeway through the heart of the Latinx community. There are also Nazi sympathizers, including seemingly kindly Dr. Craft (Rory Kinnear), who is contemplating an affair with another of Magda’s aliases, an apparently battered wife and mother.

Trying to find their way through all of this are LAPD detectives Lewis Michener (Nathan Lane) and Tiago Vera (Daniel Zovatto). Lewis is worried about the Nazis, but Tiago is much more concerned with the social struggle, especially as it affects his family. Tiago’s mother Maria (Adriana Barraza) believes in Santa Muerte, and knows along with the audience what Tiago refuses to believe: that Santa Muerte spared him when he was a child. Tiago’s younger brother Mateo (Johnathan Nieves) wants to join a gang, and younger sister Josefina (Jessica Garza) has survived a secret trauma. 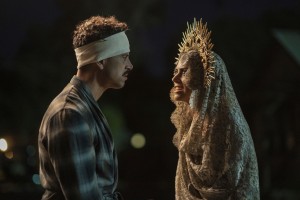 Adam Rodriguez plays Tiago’s older brother Raul. Raul is a hardworking man who loves his family and his neighborhood. In the first episode, when police invade the area, Raul stands up for his peers. He has no memory of Magda whispering into his ear, or going on a shooting spree, which includes him almost killing Tiago’s partner Lewis. The only way for Tiago to stop Raul is to shoot him. Apparently due to Santa Muerte’s intervention, Raul recovers (and due to Lewis lying about the whole business, Raul is not arrested), but now he has a wound in his head and a gap in his memory.

Rodriguez was a regular as FBI Special Agent Luke Alvez for the last three seasons of CRIMINAL MINDS, which just wrapped its fifteen-year run this spring. The native New Yorker had an even longer stint over ten seasons of CSI: MIAMI as Eric Delko. Other projects include the MAGIC MIKE movies and regular/recurring roles in EMPIRE, JANE THE VIRGIN, THE NIGHT SHIFT, RECKLESS, UGLY BETTY, the original ROSWELL series, RESURRECTION BLVD, ALL SOULS, FELICITY, and BROOKLYN SOUTH.

In a phone interview, Rodriguez talks stepping back into the past of Los Angeles in PENNY DREADFUL: CITY OF ANGELS.

ASSIGNMENT X: How did you become involved with PENNY DREADFUL: CITY OF ANGELS?

ADAM RODRIGUEZ: I was just finishing up CRIMINAL MINDS. I’d done three seasons of that show. I had a great time doing it, great group of people, and I was looking to find my next gig. PENNY DREADFUL was one of the things that had come in the door, in terms of seeing a project on the horizon. As soon as I read the script, I fell in love with it, I fell in love with the character of Raul, and I fell in love with the story itself, and what John Logan was saying through the story and all of his characters. It really resonated with me. I was fascinated by the time period, and the struggles that were going on during that time period, and how similar they are to the same struggles we’re going through today. It just all felt like, “Man, we have not come very far in eighty-two years, and there’s something to be said about that.”

I was excited to be able to participate in telling the story. And so I dug in, I did a bunch of research, and then I had a wonderful meeting with John and [executive producer] Michael Aguilar. We clicked on a personal level, and because of all the research that I had done, because of the excitement around the script that I had, we ended up having a great talk about all of those things, all of that history. I think we just knew in the room that we wanted to work together, and so it ended up being.

AX: Did you know much, or anything, about that part of Los Angeles history?

RODRIGUEZ: Not so much about the 110 Freeway, the Arroyo Seco. I knew about all the people that had been displaced from the Chavez Ravine, when that happened. That history was more familiar to me. But all of the people that were displaced, and the jobs that were taken away, essentially marginalized people that were just completely pushed out of the way in the name of – they call it “progress,” and I guess in some ways it is. There are three sides to every story, but there’s always a price to be paid for something, and when you’re the person paying the price, it sucks, especially when you don’t have a voice. To answer the question, no, I didn’t know much before the script about that specific time in L.A.’s history. I certainly didn’t know about the presence of Nazi spies in Los Angeles, and I didn’t know about Hitler’s infatuation with Los Angeles. I didn’t know that Magda was lurking the Earth, trying to make things more difficult for mankind, and preying on his weakness. That’s actually not true – I kind of knew she existed [laughs].

AX: Is Magda a figure from actual folklore? I know Santa Muerte is …

RODRIGUEZ: Santa Muerte is. I think Magda is an amalgam of a few different spiritual essences, and more molded into a character than an actual existing deity, archangel? I don’t know what [to call her] exactly.

AX: Had you seen the earlier PENNY DREADFUL series?

RODRIGUEZ: No, not until after I had the job. My wife and I started watching it, and I probably got halfway through Season 1, which I was really enjoying, and then I just got really busy with work, and never got a chance to complete it. But my wife got completely hooked, and the more hooked she got on that, the more excited she was about the show itself. She came with me to my first wardrobe fitting, and I think she’s been more excited about the show premiering than even I was, and that’s saying a lot. She loves the time period, and had an understanding of what the story was about, and it’s a great feeling to be doing something that she’s this excited about.

AX: How would you describe Raul Vega as a character?

RODRIGUEZ: I think that Raul is filled with a sense of passion for what’s right, and fighting against what’s wrong. I think he’s one of those guys that was not allowed to be all that he was capable of being in the time period that he existed in, and that was frustrating for him, and that is why he is so passionate about standing up for the marginalized, standing up for the people that are discounted, or pushed aside, and not really seen for who they are and their full potential. That’s been his experience, and he is smart enough and strong enough to want to stand up and push back against not only the people, but just the mindset that allows this to be. He starts the story out where he sees only one way of accomplishing it, and that is to fight fire with fire. I think that over the course of time, we’re going to see Raul evolve and broaden his view of the world, and maybe start understanding that you don’t always have to fight fire with fire. There’s a time for that, but that’s not always the way to get to where you want to go. 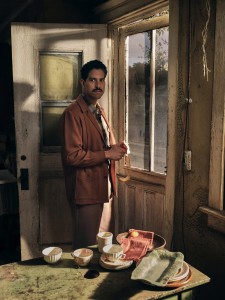 AX: When Magda whispers to him in the first episode and he goes on the shooting rampage, is he possessed, or did she just get him to focus on one particular instinct, or what is going on with him in that scene?

RODRIGUEZ: I don’t know that anybody knows exactly what Magda’s magic is. But it’s real as it exists in the universe of the story, and whether you want to call it a state of hypnosis, or possession, Magda has a way of tapping into something that exists in every person, whether it’s their greed, whether it’s their passion, or their anger, and she knows how to get inside and push the buttons that operate the worst of each of those people. And I think that that’s what happened with Raul in that scene. Yes, he’s watching all of these people in his community, that he loves and works with and has grown up with and is willing to fight for and put his body on the line for, being beaten and shot, all because they’re simply fighting to keep their homes and their jobs.

In that moment, she taps into what that rage is for him, and pushes him to go to the worst part of himself. And I think that there is a state of hypnosis. Raul is not a murderous character. I think you can take the traits of somebody, the same way that she might be operating on Townsend or any of the characters that she’s manipulating – I don’t think that they’re necessarily bad people, they just have their weaknesses. We all do. When you know how to push the buttons of those weaknesses, you can get people to do things that they might not otherwise do. And so she tapped into a weakness at that moment in Raul and put him in a state of hypnosis that just sent him into a blind rage to do what he did. But I don’t think that he was himself in that moment at all. I don’t even think he really recalls that moment. It’s as if he was sleepwalking.

AX: Before Raul, had you ever played a character in the ‘30s before?

RODRIGUEZ: No. The only other time I’ve worked in a period piece was for one episode of ROSWELL, a show I did almost twenty years ago. We did one episode that was sort of a take on BEWITCHED [set in the ‘60s], and I was the Darrin character, and Katherine Heigl, who was my wife [on the series], played Samantha. So that was the only time I’ve ever played in a period piece, and I had a great time doing it.

To do a period piece, and to do it the way we’re doing it on PENNY DREADFUL, is a dream come true. Every single detail of the wardrobe – Christie Wittenborn, the costume designer, is such an incredible talent. What she created for this show in terms of every last detail of every character’s wardrobe is extraordinary, and I really felt lucky to be a part of that. And on top of that, production design, set design, set decorating, the props, the cars that they sourced for this – every last detail is really something special. It’s hard for me to put into words. To get to work on something of this magnitude, with this level of detail, this rich and this important, layered story that I think has some importance, it’s probably my favorite thing I’ve done in my career.