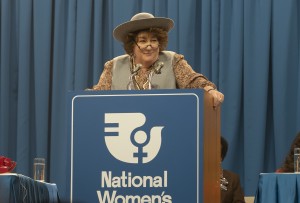 MRS. AMERICA is a nine-episode miniseries, streaming on FX on Hulu, about the battle over the Equal Rights Amendment. Created by Dahvi Waller, MRS. AMERICA is set in the 1970s, when what seemed like a simple constitutional amendment – the ERA guaranteed “equal legal rights for all American citizens, regardless of sex” – was turned into a political flashpoint by far-right activist Phyllis Schlafly, played by Cate Blanchett.

Margo Martindale plays real-life Democratic politician Bella Abzug (1920-1998), a U.S. congresswoman for New York who was one of the founders of the National Women’s Political Caucus. Martindale, who was won three Emmys for her work on FX series – one for Supporting Actress as backwoods gangster Mags Bennett on JUSTIFIED and two for Guest Actress for her work as KGB agent Claudia on THE AMERICANS – is originally from Texas, but has spent a great deal of time in New York.

This interview combines comments Martindale made on a Q&A panel and a one-on-one later in the day.

ASSIGNMENT X: What drew you to MRS. AMERICA?

MARGO MARTINDALE: The subject matter, the character, the network, and Cate Blanchett.

AX: Had you worked with Cate Blanchett before?

MARTINDALE: No, but she’s phenomenal, and a great gal. This cast of women was just a joy, and I love them all so much. We were a bonded group.

AX: Is it fun working with a largely female cast?

AX: How would you describe Bella Abzug?

MARTINDALE: Well, she’s loud, and smart, and right, and fights for the right causes. I live on the Upper West Side of Manhattan, and I’ve lived on the Upper West Side of Manhattan for forty-six years. I know I don’t sound like it [vocally]. But I knew Bella, absolutely. She represented the Upper West Side. She ended up representing the Bronx, not happily, I don’t think. Now, I never got to meet her. I probably missed her by seconds at different places. I knew that she was the loud, obnoxious woman in a hat. I knew that she made the news all the time. What I learned about her was just a whole world that I didn’t know. And she was a remarkable person. I think she was voted the third most influential person in the House.

I talked to a lot of people who did know her. Some hated her. Some guy told me that he heard when she was going into Congress, the guy said to her, ‘Nobody wears a hat in Congress.’ And I won’t say what she said. I thought, ‘Okay. I can play that.’ 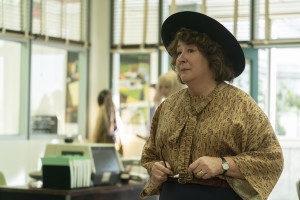 AX: Do people around you have opinions about the project MRS. AMERICA?

MARTINDALE: My daughter has learned more about it. She didn’t know much about it, and she grew up in New York City. I was in a store, shopping on Madison Avenue, and a woman who likes me was talking about some projects I was doing. I’d been doing MRS. AMERICA. And there were two young women of color who were sales ladies, and I said, ‘This is Uzo [Aduba]. She plays Shirley Chisholm. Do you know about Shirley Chisholm?’ They go, ‘Who is Shirley Chisholm?’ And I said, ‘She is the first woman to run for [U.S.] president. She also happens to be a woman of color.’ And [the saleswoman] said, ‘I think I’m going to cry.’ So, wow, that’s something. I think that’s incredible. Hopefully, those kinds of things will come about from people watching this show.

AX: Were you happy with the way THE AMERICANS wrapped up? 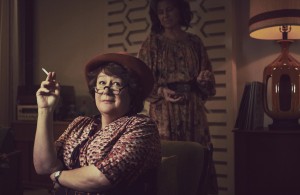 MARTINDALE: I am working on [the series] YOUR HONOR with Bryan Cranston, and I’m doing four episodes of that, and then I do AMERICAN CRIME STORY: IMPEACHMENT.

AX: And what would you most like people to know about MRS. AMERICA?

MARTINDALE: I would just like them to watch it and take away what they will.