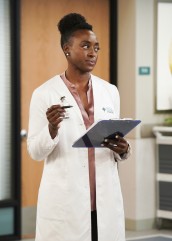 The actress on how her character is like Harry Potter's Hermione 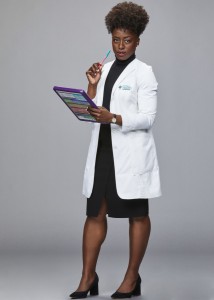 In CAROL’S SECOND ACT, now in its first season Thursday nights on CBS, Patricia Heaton plays erstwhile teacher Carol Kenney. Divorced and with an empty nest, former Carol has decided to fulfill her lifelong dream and become a medical doctor. This makes her the oldest intern in the group under the supervision of strict Dr. Maya Jacobs, played by Ito Aghayere.

Aghayere, originally from Alberta, Canada has a number of film, TV and Broadway stage credits to her name. She describes herself as an enormous fan of HARRY POTTER, especially the character of Hermione. Aghayere is also a big fan of Heaton.

“She’s phenomenal,” Aghayere says of the CAROL’S SECOND ACT lead during a panel for the series. “[We have] in-depth conversations about faith, and the business that we’re in.” Addressing Heaton, she adds, “You have been there for me.”

Aghayere compares her CAROL’S SECOND ACT character to Hermione. “Dr. Maya Jacobs is Type A. I was a POTTER-head when I was a kid. I loved HARRY POTTER. And before it came to Broadway, I was always disappointed that there were no black people in it. But I always imagined myself as a black Hermione.”

Then came the stage play HARRY POTTER AND THE CURSED CHILD, in London, Broadway, and now San Francisco, where Hermione is played by a black actress. “I was like, ‘Ahhh.’ So I would say Dr. Maya Jacobs was a black Hermione when she was growing up. She always handed in her reports on time, she got all the accolades and all of the best schools. But I think she also misses a lot of things. She misses connection in place of efficiency. And so I think what’s beautiful about this story is that she becomes part of this family and has to learn how to be someone who can show love, not only teach how to love.”

After the panel, Aghayere makes time for a follow-up discussion.

ASSIGNMENT X: Have you played Hermione in the stage play HARRY POTTER AND THE CURSED CHILD?

AGHAYERE: I don’t think any time soon, God willing that this show does really well, but I did enjoy seeing it on Broadway. It was phenomenal. I had a couple of friends who were in it, and it’s a brilliant show.

AX: Now, in CAROL’S SECOND ACT, you’re playing the person who puts the residents in their place …

AGHAYERE: Yes. My role is really to keep them in line. And I think it’s really to give them an understanding of how important their job is. And I think a lot of the time, I play antagonist to Patty’s character, Carol. At first we clash, but ultimately, we come to a place of understanding, where we have to work to incorporate each other’s styles to create a family at this hospital, because we spend so much time with each other as colleagues that, at some point, we have to learn from each other. And so my role is really to push these interns to do the best work that they can, as well as humble myself enough to learn from characters like Carol, who know a lot more based on experience, less on the job that she’s had as a mom. But I think there’s a lot to be grown there.

AX: Did you have to research anything in order to play Maya, either how to do certain medical procedures, or how to boss people around?

AGHAYERE: I didn’t have to research how to boss people around [laughs]. I was raised by two immigrants, West Africans. My dad went to M.I.T. and Harvard, very smart guy. He would sit at the kitchen table with me until three in the morning, doing algorithms, me crying, and him saying, “You have to get it right!” And I think that kind of energy is something that courses through my character, Maya Jacobs. Because she comes from those kinds of roots, where she knows how much it cost to get to where she is. And she’s willing to do the work. And she wants other people to do the work. And so I didn’t have to search too far to find inspiration for how to be the domineering, high-achieving doctor that she is.

What I did need help with was the medical side of things. And so I think having a medical consultant on the staff was really, really great. As well as having – one of my cousins is also a chief resident as a doctor, and black, and female. And that kind of experience in that very patriarchal world really helped for me to ask her questions about what it was like to be at the top of the food chain, and have to really marshal the forces around her to rise to her standards. So it was really great to borrow from her experiences as well. 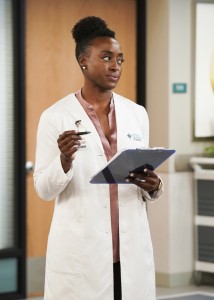 AX: This may be a weird question, but based on what you just said, does mathematics help you at all in acting? Is there any aspect of knowing math that is helpful to you?

AGHAYERE: I think broadly it might be. The idea of there always being a solution to a problem is something that helps when you’re looking at a story. So if you’re trying to break down a story as an actor, trying to figure out what does this character want, and why does this character want it – at some point, every scene, if it is written well, is about a character trying to find a solution to a problem. They might not know the problem, but what they’re doing is a tactic that they’re using that will bring a solution to their problem. I think in some ways, if you apply your understanding of mathematics, there’s a solution somewhere. You just have to dig deep enough to find it.

AGHAYERE: There is a project called WHITE DEVILS that is a film directed and written by Leon Hendrix III for Blumhouse and Amazon, and that project should be shooting [in the near future], and it’s incredible, about this father and his two sons. After an altercation with the police in which his wife dies, he decides to take his two boys to the woods and raise them off the grid, so they have no idea what color is. They don’t know they’re black, they don’t know what’s white. Until one day, the decide to venture past a tree line their father told them never to go past, and they encounter an unconscious white woman, a young girl. And that’s where the story unfolds. And it’s a brilliant story about coming of age, and color, and politics, in a way that is housed in the story of this family, and how they have to craft a new beginning.

AGHAYERE: I would love people to know that this is a show that is accessible to any age group, any race, any gender. This show is accessible because it’s about people trying to find lives that they can be proud of. They’re trying to be people that they have always dreamed of being. Every character in this show kind of faces a crossroads where they’re trying to become the people they’ve always wanted to be, despite all the things they’ve been told that they are, all the things they’ve been told that they should do. They want to be more. And I think that’s something that’s relatable to anyone. We’ve all looked in the mirror and wondered, faced that mirror and wondered, “Is there more? There has to be more than this. I am more than this. How do I get there?” And I think that it’s a scary thing when you realize the choices that you’ve made are not the ones you want anymore. And so I think that junction in our lives is what the show is all about, how you make a second choice. A second choice means that there was a first choice. How you make a second act is by going through the first act and changing what you did, and making your life into something different. I think every character does that to some degree, and I think that’s completely relatable to anyone.