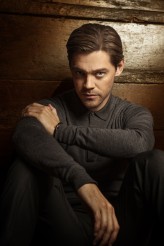 The actor talks his lead role on the Fox show 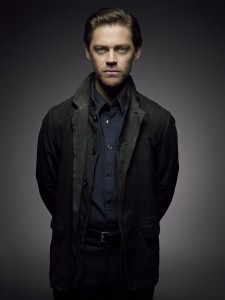 In Fox’s Monday-night drama thriller PRODIGAL SON, Tom Payne plays the title character, Malcolm Bright. Malcolm is a profiler of murderers, hired as a consultant at the NYPD after he’s fired by the FBI. When PRODIGAL SON begins, Malcolm hasn’t spoken to his father, Martin Whitly (Michael Sheen), in ten years. This is because Martin, a brilliant doctor, has murdered at least twenty-three people (maybe more). Martin has been locked up at a psych hospital since Malcolm, as a child, called the police on his dad. But solving some cases and saving lives requires expertise that Martin is uniquely qualified to provide, so Malcolm finds himself conferring with his father. This unnerves Malcolm – already suffering from his own psychological issues – and delights Martin.

Payne has spent his fair share of acting time dealing with gruesome death. The English actor played the kindly Paul “Jesus” Rovia on four seasons of THE WALKING DEAD. Payne’s other credits include the feature films IO, THE PHYSICIAN, INHERITANCE, and MY FUNNY VALENTINE, and the British TV series WATEROO ROAD and LUCK, as well as playing Linton in the 2009 U.K. miniseries adaptation of WUTHERING HEIGHTS.

Speaking at a Q&A session for PRODIGAL SON, Payne talks about his work on the series. In a follow-up conversation later, he goes into further detail.

Asked if he’s done any research into being a profiler, Payne says, “I think we’re really lucky in that there’s a wealth of material out there, fictional and true to life, to draw from. There are a few pockets out there of people [in real life] who are in the same position as me in the show. There’s one [podcast] in particular, which [executive producer] Sarah Schechter actually put me onto, called HAPPY FACE, about the daughter of a serial killer, and it follows her and her journey to talk to people who were affected by her father, directly and indirectly, and with her mother, and her relationship with her father, and the fears that she has, and the intense pain caused by having a father who’s a serial killer.

“So that was really helpful to me. It’s really hard to listen to, and made me cry many times, because there’s a lot of pain and hurt there. And the character in the show is in pretty much the same position and has a lot of walls up, but is intent on trying to understand his father and the similarities that may or may not exist between them.”

Payne says that, so far, his work doesn’t follow him home from PRODIGAL SON, but it might. When he was working on THE WALKING DEAD, “There were zombies everywhere when I got home. I actually did have zombie dreams after a few weeks on that. Well, I’m super-scared I’m going to get serial killer dreams on this. I think you have to play a bit of a balancing act with how involved you get in the material you’re dealing with. But you can’t help it. I’ve been working all day every day on this show, waking up in the morning, get in the car, go to work, work all day, so it’s physically and mentally exhausting anyway. To carry that kind of trauma, I think my brain’s too tired to hold any more of that kind of stuff in it anyway. But I have a pretty good imagination, and I can put myself in and take myself away.

“There’s a scene in the pilot where I admit that Martin Whitly is my father, and that was pretty hard. It was a great moment. And for me, it was like, wow, that was a moment I hadn’t felt in a long time, where I had a realization on camera of what it meant to say that he was my father. And that was wonderful, because I felt it happen, and the pin dropped, and the whole crew was like, “Wow, he just felt that moment,” which is really amazing. The emotions are there, but they’re not so closely aligned with the character’s actual feelings that it will damage you. Not with me, anyway. But it’s a lot of fun to go there.”

ASSIGNMENT X: When you first went in to talk about playing Malcolm, what did the producers tell you about the character?

TOM PAYNE: [laughs] Well, the key hook of the story is that he was the son of a serial killer, and that serial killer is going to be played by Michael Sheen, and that was enough, basically.

AX: Malcolm has such bad dreams that he has to chain himself into bed at night. How disturbed do we see him as being?

PAYNE: Pretty disturbed. There are a lot of different facets to his own mental issues. Though at its heart, it’s about the father/son dynamic, and all the questions that you wanted to ask your dad. But in this instance, there are many more questions that are a lot darker.

AX: When you get a script for a new episode, do you read the opening scenario and say to yourself, “Hmm, I wonder what somebody doing this would think?” and try to solve the mystery before you read on, or do you read the whole script?

PAYNE: I read the whole script, every time. 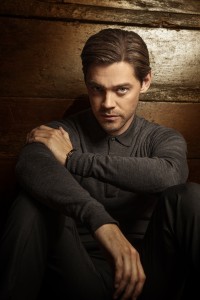 AX: Besides the podcast you mentioned on the panel, did you have to research any particular aspect of either police work or psychology to play Martin?

PAYNE: I did have a broad start on it, because he’s been doing [profiling work] for about ten years now. So I had a look at a lot of different serial killers, as he would have done, to get a broad range of experience.

AX: Seeing his father again, does Malcolm have any ideas about his father that are being challenged by the resumed contact, or are his ideas confirmed, or is he using his talents to piece together what’s really going on, versus what his father is presenting?

PAYNE: I think outwardly he’s not surprised by what he finds, but he feels that he can probably get to another place with his father, deeper than any other person has. And he wants to. He wants to connect with his father.

AX: And what’s Malcolm’s relationship like with his mom, who’s played by Bellamy Young?

PAYNE: No. This is the first time I’ve been Number One on a television show, and it’s a hell of a lot of work, so this is my whole life, up until we finish this season.

PAYNE: That I think it has the best cast on television, and it’s funny, and exciting, and intriguing, in equal measure.