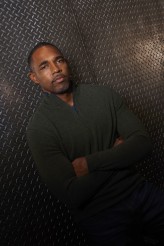 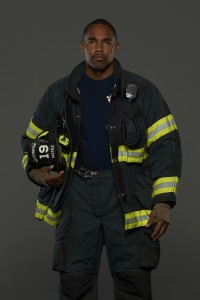 ABC’s STATION 19, now wrapping up its second season and renewed for a third, is a spinoff of its Thursday night lead-in, GREY’S ANATOMY. As with most spinoffs, there are some characters who moved from the original series to the new show. Among these migratory figures is Jason George’s character Ben Warren, who was a previously a doctor on GREY’S ANATOMY for eight seasons, but has gone through retraining to become a Station 19 firefighter in the newer series.

George, originally from Virginia, had previously worked for GREY’S ANATOMY creator/STATION 19 executive producer as a regular in ABC’s OFF THE MAP. George has also been a regular in EASTWICK, ELI STONE, MISTRESSES, WHAT ABOUT BRIAN, EVE, OFF-CENTRE and SUNSET BEACH. His feature credits include CLOCKSTOPPERS, BARBERSHOP, BREAKING IN and INDIVISIBLE.

This interview gets off to a whimsical start, with a discussion of the name game based on ABC’s new Wednesday-night show WHISKEY CAVALIER. It turns out that one’s spy name is a combination of a favorite alcoholic beverage, and the name of a first pet.

JASON GEORGE: I would be Jameson Duchess. Which may also be my stripper name, by the way.

ASSIGNMENT X: How would you say Ben Warren has matured, or changed since he became a STATION 19 firefighter?

GEORGE: The change has been interesting, because Ben left being a surgeon to do this thing, so having to go back to school, having to be the rookie again, he’s familiar with that, but doing it is something that he knows nothing about, and just learned. When he went back to school to be a doctor, he knew how to be a doctor already, so it was just learning a new discipline. But going back to school to be a firefighter is brand-new, and if you screw up, people die. So that was hard. But this season, in Season 2, it’s a lot more about the real-life consequences of basically risking your life for a living, on you and your family.

AX: Did they put you on GREY’S ANATOMY with the idea that they were going to someday segue you onto STATION 19 or any other spinoff?

GEORGE: Not at all. The funny part is, serendipity is a real thing. [STATION 19 creator] Stacy [McKee] wrote an episode that was the finale of GREY’S [Season 13], where my character grabs a fireman’s coat, throws it on to run back into the fire to save somebody, because he’s deathly afraid of fire. And she said she was writing the pilot of STATION 19 at the time, and she said, it wasn’t a conscious thing, but there was a little part of her that would love to see me be available for the show, or something like that. So she has said she that she may have subconsciously set things up. And it worked out.

AX: So basically, you looked kind of like a firefighter to STATION 19 creator Stacy McKee, and …?

GEORGE: [laughs] It’s that, or Stacy and I get on great, so she may have been like, it’s a spinoff of GREY’S, we want to have somebody from GREY’S. We enjoy hanging out together.

AX: I would guess you had to do some research/training to play a doctor, and then a firefighter …

AX: Which was harder?

GEORGE: Oh, hands down, the firefighter is harder. Because no matter what you do, any training you do for being a doctor is theoretical, and at the end of the day, you’re practicing. [Playing a firefighter], Ttey will make you climb the damn ladder. They will make you jump in and out of the suit. Getting dressed is normally an easy thing for anybody to do, but when the clothes you’re putting on weigh forty-five pounds, and then you throw in another twenty-pound oxygen tank, you’re going to start to sweat when they make you do it. You have a minute to get your turn-outs on. “Turn-outs” is what they’re called, the fireproof suit. But if you do it in over thirty seconds, you’re going to get talked bad about, and you’re not going to be the first draft choice for firefighters. So jumping into some boots, slapping on [the turn-outs], throwing on your tank, we’re all sweating bullets just from getting dressed. And that was the first hour I showed up for training. And I was like, “Okay. They’re going to kill us.” [laughs] And it’s been like that ever since. But it’s a blessing. We all got physically caught up to the curve, and now we always yell, “Bring it!”

We have a lot of fun with it. The fun part is, you get the hose work, but you also get to do medical stuff, because a good portion of what firefighters really do is, it’s not always a fire burning down somebody’s house, sometimes it’s somebody having a heart attack. So, in Shondaland/GREY’S ANATOMY fashion, they find crazy ways to have people in insane situations, where they need medical help. And then we occasionally run into fire. 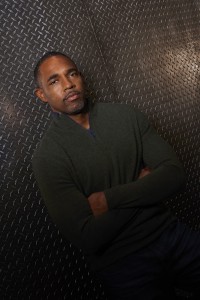 AX: Is there a different vibe on the two shows?

GEORGE: There is. GREY’S ANATOMY is, in TV terms, the eight-hundred-pound gorilla. It is the gold standard. It’s been around for fifteen years, been there, done that. If you’re brand new to the show, there’s somebody there who will explain to you how to do this thing that’s [reporters] in your face and the popularity of the show. So there’s a mentorship that happens with that, and everybody’s comfortable with how hot the room gets when you’re on a Number One show. STATION 19, most people are brand new, or this is the biggest thing [they’ve done so far], so it’s a whole different level. We’re the new kids at school, and we have a lot of fun.

AX: Paris Barclay is one of the executive producers on STATION 19, and directs a lot of the episodes. How is he to work with?

GEORGE: Paris is the man. Paris is Papa. He’s done so many shows, he’s legendary in the business, but we actually get to have him. And as serious as so many of the [episodes] have been, he’s incredibly funny. And that’s what people forget about him. Even when he’s kicking people’s asses to get the job done, he keeps it light on set, even when it’s the most insanely dark thing that we’re doing on set. So he’s a pretty phenomenal director, and I’m learning a lot from him.

AX: And what would you most like people to know about Season 2 of STATION 19?

GEORGE: It only gets crazier from here. And if you were worried about Ben and Bailey [played by Chandra Wilson], you were right to be [laughs].