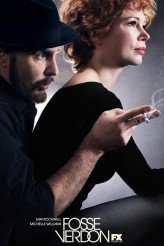 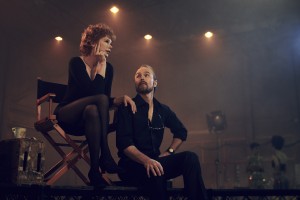 FOSSE/VERDON, FX’s eight-part miniseries airing Tuesday nights, chronicles the complicated relationship between multi-award-winning director/choreographer Bob Fosse (played by Sam Rockwell) and Broadway musical star Gwen Verdon (played by Michelle Williams). FOSSE/VERDON moves back and forth in time between the night of Fosse’s death to his and Verdon’s work together and more. Thomas Kail and Steven Levenson created the series for television.

Joel Fields won an Emmy for his writing on FX’s THE AMERICANS, as well as a Golden Globe as one of the show’s executive producers and show runners. (The series also earned a large amount of other awards over its five years.) Fields serves as an executive producer and writer on FOSSE/VERDON. He is wrapping up a chat with Nicole Fosse, daughter of Fosse and Verdon, who is a co-executive producer and an informational resource for the series.

ASSIGNMENT X: Did you actively want a miniseries made about your parents, did you think it was a good story, or are you involved because you felt, “If they’re going to tell it, let’s make it accurate”?

NICOLE FOSSE: I think it’s a terrific idea, and I feel, if it’s going to be told, it needs to have as much emotional authenticity as possible, which is what’s happening.

JOEL FIELDS: (to Fosse) You’ve been doing a lot to keep their legacy alive.

AX: Congratulations on all of the awards for THE AMERICANS.

FIELDS: Thank you very much. It’s been a wonderful victory lap. And it’s been great to do this.

AX: Was there anything you learned on writing THE AMERICANS that’s been useful for FOSSE/VERDON, or are they so completely different that it doesn’t transfer? There is a little bit of lying going on in both shows …

FIELDS: As we used to say in THE AMERICANS, we’re all spies in our own lives. And I think on this show, we can say, we’re all playing roles in our own lives. It’s really not so different. I mean, yes, fortunately, the stakes are not quite the same in terms of life and death, but they are life and death for these people. And I think whatever you’re doing in life, it’s the most important thing, and I think, part of what was amazing about Gwen Verdon is, as you see, particularly in the second episode, she was willing to keep dancing when everybody else was exhausted. She would push through until everyone was collapsing. She would do anything to deliver the greatest performance she could, and so too would Bob. So I think when we find something that drives us, we’re ignited in a way that we’ll do anything to achieve that. And I think to see these two collaborators in that together is very specific and it’s very unique to theatre and film, but it’s something that everybody can relate to in their own lives.

AX: Why did you want to work on FOSSE/VERDON after finishing THE AMERICANS?

FIELDS: It’s funny. When I told [THE AMERICANS creator] Joe [Weisberg] I was going to do this, he said, “If somebody had gone off and constructed a show that you had to do, this would be it.” I have such a passion for Bob Fosse and Gwen Verdon’s work, such a connection to it, because of my love for theatre and musical theatre. Steven Levenson likes to joke that one of my special skills is, I know [the Bob Fosse-directed] ALL THAT JAZZ by heart, and PIPPIN, and CAN-CAN. So I love this story, the opportunity to work with Tommy and with Steven has been extraordinary. I personally love to collaborate. So you put all that together, and then add Michelle and Sam to the mix, this world, the chance to explore it, another complicated marriage and relationship, it was impossible to say no. They had me at “Hello.”

AX: To go back quite a ways, when you first saw things like Fosse’s film version of CABARET and ALL THAT JAZZ, did you think, “I wonder who this guy was?” Or did that come later?

FIELDS: I think the legacy of Bob Fosse and Gwen Verdon is so strong for each and every one of us. I was in a production of CABARET at Stage Door Manor Summer Camp when I was a teenager. 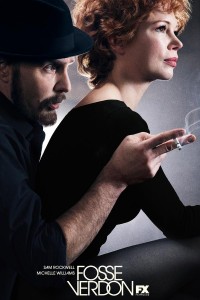 AX: Who did you play?

FIELDS: I played Ernst Ludwig, Nazi character. Somewhere in my mother’s basement is a photograph of me with some old man makeup and a swastika, I’m sure [laughs]. And ALL THAT JAZZ, when I saw it, just blew my mind. All those movies were a pivotal part of what pulled me into the desire to be a storyteller, a writer, and a producer. And Gwen Verdon’s work also had been very important for me. I helped co-write a new book for the musical CAN-CAN, which is the musical that really launched her career into super-stardom, back when she was starting out. So I think all of us have a relationship with the work that these people did, and the hope is that we can take all of that specificity and use it to create a story that has a very universal approach and appeal.

AX: Did you and the other writers construct FOSSE/VERDON like a musical?

FIELDS: Well, I don’t think musicals have a particular musical construction. They’re all different, just as all dramas are different. I think the key thing here that we’ve tried to follow here is the human drama and the relationship. I think in life, we want our relationships to be uncomplicated, and in drama, we want them to be complicated. And Bob and Gwen have a uniquely complex relationship. And all of us are people who have come out of and are obsessed with theatre in general, and musical theatre in particular. But the hope is that anyone can tune into this and know nothing about it, not even care about musical theatre, and still be compelled by this unique relationship, this strange and yet somehow universal marriage.

AX: Are the vocal tracks that we hear the original vocal tracks from the various films and musical plays being dramatized, or are they the FOSSE/VERDON cast singing?

AX: There’s a great bit of direction that Gwen Verdon gives to the SWEET CHARITY people where she tells the women playing prostitutes that they’re should be thinking that all they want to do is rest at the same time they’re singing their come-on Is that a direction you would give, or did you go to Tom Kail and say, “Okay, if you were trying to do this, what would you tell these people?”

FIELDS: Those scenes came directly out of the research. Gwen knew how to take those ideas and express them so that the dancers could not just dance steps, but could embody characters. And that was a big part of what brought that work a lot to life.

AX: Are you and your THE AMERICANS collaborator Joe Weisberg are working on anything together now?

FIELDS: Yes. Joe and I are developing together, and there’s one project in particular that we’re working very hard on and very excited about, and are not ready to share yet.

AX: What would you most like people to know about FOSSE/VERDON?

FIELDS: That it’s going to be fun and engaging, and that it’s going to make you feel, and that we have all been working ourselves to the bone, not because we love to work hard, though we do, but we’ve been working ourselves to the bone because we love this. We love every frame of it, and we hope that other people will love it, too.