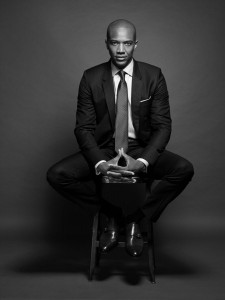 In Part 2 of our exclusive telephone interview with J. August Richards regarding his work as a director/writer/producer/actor on TVOne’s Cleo TV’s Sunday-airing series GIANTS, we discuss the show’s depiction of spirituality, the homage to FRESH PRINCE OF BEL-AIR, whether he’ll play Deathlok again, and more.

ASSIGNMENT X: You’ve talked about being a churchgoer in real life. Do you relate to the spirituality in GIANTS ?

J AUGUST RICHARDS: Very much so. [GIANTS creator/star] James [Bland] and I have very long and involved conversations about God, about religion, about spirituality, about prayer, about meditation.

AX: How is it writing dialogue to be spoken by someone who’s not only a colleague, but a longtime friend?

RICHARDS: Because [Bland] is one of my best friends, I know him so well that writing for him and writing in his world was really, really easy in a lot of ways. I remember in my notes, when we were discussing the episodes, in the scene where he gives the birthday speech, I just wrote, “Birthday speech from Hell.” And I didn’t know what he was going to say, but the previous twenty pages let me know exactly what he had to say. And by the time I wrote that speech, I was looking at it and I was like, “Oh, my God, I would be scared of this speech. I would be afraid of delivering this speech.” Because it’s a really tough scene. You have to be drunk, and high, on your birthday, where you’ve been analyzing your life, and you get surprised by your friends who you thought forgot about you, and then you give this speech where you accidentally expose everybody’s secrets. It’s definitely the hardest thing I’ve ever written for anyone to do. But I was blown away with how he handled it. He did an amazing job with that speech.

AX: In the GIANTS second-season writers’ room, do you all decide on what the seasonal arc is going to be, and then everybody goes away and writes their episode, and then James Bland takes a last pass at it, or how does it work?

RICHARDS: Yeah. So we all got together. We thought about the comments that people [made about] the first season, and we thought about the questions we wanted to answer with this season, we thought about how we could sharpen up the storytelling, how we could really focus each character’s journey, and we discussed how that would unfold over the eight episodes. It was originally going to be eight episodes, and then it turned into six episodes and an hour-long finale. And then some of us wrote scripts together. I wrote Episode 5, and I co-wrote Episode 6 with James, and then me and James wrote the role that I ended up playing, which was cool. So yeah, that’s exactly how we did it, and then James would read it and approve of it, or change it, or do whatever he felt was necessary.

AX: You’ve played a lot of lawyers in your career. So you’re saying this one wasn’t written for you, they just went, “Oh, there’s a lawyer, so let’s have J. August Richards play him”?

RICHARDS: [laughs] Well, it’s interesting, because initially, I was going to play Journee’s therapist. But then when we started to deal with the aftermath of Malachi’s birthday speech, we realized another character was emerging, the character of Walter’s attorney. And my producer [side of personality] said, “Well, I have a lot of credibility playing lawyers, so people will believe it if I play the lawyer instead of the shrink.” And also, I was shooting KEVIN [(PROBABLY) SAVES THE WORLD at that time], so I couldn’t play the shrink anymore. But then I had a break from KEVIN, and I was able to come in town [to Los Angeles] and shoot GIANTS, right around the time when I was shooting the AGENTS OF SHIELD 100th episode. That was a really crazy time for me. So yeah, I came in and did that role. By the time we were writing it, I knew that I was going to be playing it.

AX: The character Ade, played by Sean Samuels, has a dance routine in the first episode of Season 2 of GIANTS, which you directed. Is Sean Samuels a dancer? 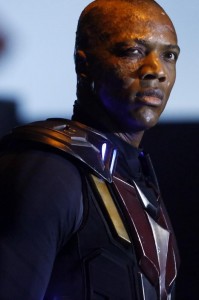 AX: Did you block-shoot you’re the Season 2 first and second episodes, or did you shoot 1, and then 2?

RICHARDS: I shot 1, and then 2. What happened was, our director fell out for the second episode, so I filled in at the last minute and did the second episode as well. It was like the week before I had to move to Atlanta to shoot KEVIN, so it was just a crazy, crazy period, so I just filled in, in a pinch.

AX: There is a great deal of use of the “N” word in GIANTS, where black characters are saying it to one another without any apparent negativity. [We see very few white characters, and they never say it.]

RICHARDS: Yes. There is.

AX: I understand that there are different schools of thought in the black community about whether it is ever acceptable for anyone to ever say that word in any context. What are your feelings about it in the context of GIANTS?

RICHARDS: What I loved about this show, and why I got involved with it as a writer and director, is because of the authenticity and the complete disregard for having to explain oneself as a black person, and we never, ever ask the question of, how would anyone other than these characters view these moments. So we never did what I think it was W.E.B. DuBois who described as “double consciousness,” which is the idea that black people have to exist as black people, and then contextualize themselves within the white society. We only had a single consciousness on this thing, which is, how do these characters behave? And that’s how they behaved. Like I said, I know James well, I know all of his friends, I hang out with them, and that’s just the way that it is. That’s the conversation. I say it, too. So that was just the reality of who these people were, and that’s what I loved about the show, and that’s why I had to get involved with it.

I could have gone the route of asking all of my producer friends and writer friends, “Can I shadow? Can I write a spec? Can I do this, can I do that?” But as a writer and director, I had little to no interest in that. As a writer and director, I want to be authentic and I didn’t want to wait for permission from the Hollywood system. I want it to be so about the art, in terms of my writing and directing. Because as an actor, there is a consumer part of this industry that I am aware of, and that I’m okay with. But when it comes to the things I create as a writer and as a director, I just want them to be as authentic as possible.

RICHARDS: We hope so. So many other things are in flux right now – James has obviously gotten a lot of attention from the show, so he’s working on some other things, he’s gotten some other jobs – so I hope so, but I’m not sure.

AX: You have recurred on MARVEL’S AGENTS OF SHIELD – which is coming back for its sixth season on ABC Friday, May 10 – and there’s been a lot of Internet talk that you should play Deathlok in a Marvel feature film …

RICHARDS: Yes, there is. I guess this all started with that Deadline article where they said that it was rumored that the character was going to be joining the Marvel Cinematic Universe. And then another article came out, and then I put something out about it, about how I really want to play the part, because I do. I just feel incredibly connected to the character and I want to keep playing him, and ultimately they’ll decide whether it fits into the larger landscape. And if they do, great, if not, I’ll welcome the new actor to the Deathlok family. 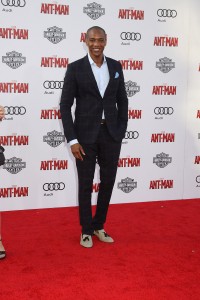 RICHARDS: So the series I’m in the process of trying to sell I’ve been working on for quite some time. It’s called THE HYPNOTIST [which Richards first wrote and directed as a short film in 2012]. James [Bland] is producing it, and because of the success of GIANTS, we’ve been taking a lot of meetings about it, so fingers crossed that we actually sell it. We just started to pitch it, and we’re going to pitch it everywhere. Whatever makes sense, and whatever is the best business model for the show, and that lets us keep the authenticity of it, that’s where we’ll go. So I don’t know where it will end up, but it’s been a passion project of mine for a long time. So when we find the right partner, then we’ll do it.

AX: Would creative control be one of the things that you’re looking for with that?

RICHARDS: Not control, because I love to collaborate, just with the right collaborator. I don’t believe that I know everything, and I’m so open to learning from people, and collaborating with people. So I don’t need control, I just need to know that I have the right partner – in a studio, in a network, in a streaming service, whatever, wherever it ends up.