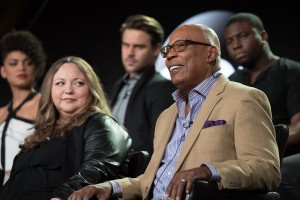 Paris Barclay is a highly experienced director/executive producer, a position he fills on STATION 19. Barclay directed the series pilot and five other episodes; he also supervises other directors on the show to make sure there is a consistent look and tone.

Barclay talks about his experiences working on STATION 19. He also discusses his directing/executive-producing on Fox’s 2016 ten-episode series PITCH, about the first female pro baseball player, which is now available in its entirety on Amazon Prime.

ASSIGNMENT X: What makes STATION 19 different from other first-responder series?

PARIS BARCLAY: Well, it’s Shonda Rhimes. So STATION 19 is a fire station as reinvented by the spirit of Shonda Rhimes. So probably a real fire station like this wouldn’t go exactly this way. But we’re in the Shonda Rhimes world, where we have much more equality, where we have all sorts of women firefighters, where people of color are treated with respect. It’s probably not necessarily going to be the way it is [in the real world]. It’s a GREY’S ANATOMY spinoff, and like Shonda, we go a little bit deeper into the characters and their relationships, and they fall in love with each other a lot more often – although they do on [Fox’s first-responder drama] 9-1-1, too. [But STATION 19] is more of a romance, I think, than 9-1-1, which is more of an action/adventure story.

AX: And then there’s CHICAGO FIRE on NBC …

BARCLAY: Yes, which is really more spectacle. We use the fires and the medical to tell the story of what’s going on with each of the characters. So we start with the characters, and then we figure out, “What’s the event that will help us illuminate whatever they’re going through?” So we’re more thematic in that way.

AX: Now, while it is very dramatically exciting, STATION 19 is a little mellower, perhaps, than some of the other shows you’ve done , like say, SONS OF ANARCHY …

BARCLAY: Yes. It is more fun, and there is less killing. And when people do die, it’s usually accidental. 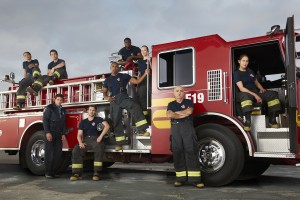 AX: You also did PITCH, which may be the first series you did where a baseball bat was used for its original purpose …

AX: Are things like STATION 19 and PITCH more fun to do, or do you enjoy the weight of things like SONS OF ANARCHY, or …?

BARCLAY: I think actually STATION 19 has proven to be more challenging, because there’s so much that has to do with making fires and these events safe for people, that we didn’t have to worry about on SONS OF ANARCHY [laughs]. Also, when I was doing SONS OF ANARCHY, I was also doing GLEE, so I was kind of bouncing between two strange worlds that were in complete conflict. So I could always sort of refresh the palate with the other one.

AX: And now you’ve met sort of somewhere in the middle with STATION 19 …

AX: How is it working with Shonda Rhimes?

BARCLAY: Well, Shonda from the pilot has been sort of our guiding spirit. I got to watch her in the editing room, when we did the very first episode, and I see why her shows are so brilliant. Because she can reorder things, and edit, and put them together like very few people I’ve ever seen. Her mind works so far – she thinks of original ideas, and says, “Let’s try this.” And it’s like, “Whoa, we never thought of that.” So there’s something very unique about how she looks at the world.

I just like to work on a good show. I like to work on a show where there’s quality writing, and where people are represented. Jaina Lee Ortiz, who’s our lead, is Latina. It wasn’t written to be a Latina; she was just cast, because she was the most wonderful woman. And then once we cast her, her father became Miguel Sandoval, and that’s just the way it worked. Many of the parts that we originally thought would be Caucasians ended up being people of color, and some of the thought we thought that would be a person of color, ended up being not. So the casting process is wide open in Shondaland.

AX: Once you’ve cast a younger lead actor, is it exciting to figure out which character actors you’d like to have play their older family members?

BARCLAY: Yes, it is exciting. I remember I thought, “Well, if we don’t want to do a Latino father, maybe her father is not Latino, and her mother is Latina. We can do anyone.” So it gave us permission to go any different way. But then Miguel Sandoval, you don’t want to lose him. 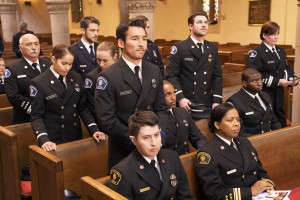 AX: When an episode of STATION 19 is meant to carry into or out of an episode of GREY’S ANATOMY, is that handled any differently than a regular episode?

BARCLAY: Yes. Because whenever we’re doing crossovers, [the Station 19 fire house] is literally supposed to be three blocks away from [the hospital in] GREY’S ANATOMY, and we happen in the same time frame. So our shows are always on the same week that GREY’S ANATOMY is. So Krista Vernoff, who is the show runner on GREY’S, and [STATION 19 creator/show runner] Stacy McKee talk about stories, and about what’s going to happen with [main character] Ben [played by Jason George], and all those things happen. They work them out together and figure out what stories they want to tell on which show.

BARCLAY: Well, for drama, you have access that you don’t have for sports. It’s one of the things I discovered talking to the Fox guys. They try to hear everything that happens, they try to see what the [team] manager is doing, they try to hear what’s happening on the mound when they’re covering that, they try to get inside of the players, but the cameras only stretch so far. So what we’ve been able to do is sort of extend the drama from sports right into the places where the viewer normally can’t go, and in the pilot, you saw this little device whoosh into it. That’s part of the trick we’re doing here. We [gave] you an all-access pass in PITCH to places beyond where those Fox cameras can take you. So a lot of times we had to do both. We had to cover the game, like sports, and then get inside of it, too.

AX: In covering the game itself, obviously, you’re actually deciding who wins, who loses, whether they strike out or not, but as far as the shots themselves, are they designed to resemble ESPN shots?

BARCLAY: Yes. We hired Mike Fisher, who was the baseball coordinator for the movie MONEYBALL, and when we were doing a baseball sequence, he staged the sequence top to bottom. Whether it’s a hit, a home run, a double play – we did three errors in one play in the second episode – he stages it with our actors and with our baseball players in a rehearsal, and then we filmed it live, like you would a regular baseball game. And then we picked it apart, and went in, and we got the parts that we need in particular. So what we [did was] running the baseball as if it’s really happening, photographing it with the box cameras, and then getting inside of it after he’s rehearsed it like a play. Then we made the camera people forget it, because live people don’t know where the ball’s going, or who’s going to make the play, so they have to sort of quasi-forget what’s coming up next, and miss, or be a little behind the action, to get it right.

AX: So you designed it to deliberately look like you didn’t know what would happen …

BARCLAY: Exactly. In the second episode, you’ll see a shot where the pitcher’s supposed to catch a ball at home plate from the catcher, and he goes and he just misses it and falls out of the frame, which I normally wouldn’t do in a drama. But in television, he didn’t know he was going to fall that way. So he’s late to the pass. It’s in the show, because it’s authentic and it feels like real baseball.

AX: What would you most like people to know about PITCH?

BARCLAY: Mostly that it’s really a Trojan horse for a world in which women can do anything men can do.

AX: And what would you most like people to know about STATION 19?

BARCLAY: I’d like them to know that, just like GREY’S ANATOMY, we’re going to give you all of the heart and all of the drama that you’re used to. It’s soapy, but at the same time, it’s explosive.