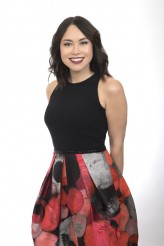 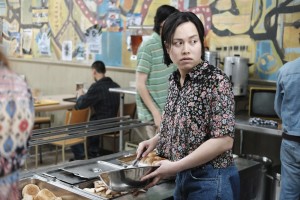 In ABC’s LGBTQ civil rights miniseries WHEN WE RISE, concluding Friday March 3, Ivory Aquino plays real-life San Francisco activist and commissioner Cecilia Chung. Both women are transgender, meaning they were born in male bodies and have transitioned into living as women. This is Aquino’s first role as a transgender woman; previously, she explains, she had played only cis-gender (meaning someone who identifies as they gender they are born as) female characters.

ASSIGNMENT X: When you heard about WHEN WE RISE as a project, did you think, “I really need to be a part of this,” or, “I wonder how this is going to depict …”?

IVORY AQUINO: Oh, the former. I knew that it would be amazing in its storytelling, because of the people involved. I saw right away that Lance [creator Dustin Lance Black] had written it and had created it, that Gus [Van Sant] was directing the premiere episode, that Bruce Cohen and Larry Mark, amazing producers, [were involved]. Bruce had produced AMERICAN BEAUTY, he won an Oscar for that, he produced SILVER LININGS PLAYBOOK. So I knew that the team behind it, they would do nothing less than spectacular work.

AX: Most of the main characters in WHEN WE RISE are played by two different actors, one older and one younger, but you are the only person playing Cecilia Chung …

AQUINO: I actually play Cecilia from nineteen through [her] mid-forties. So it’s Part Two, which is the third hour, that’s when Cecilia first shows up as a homeless teenager, and as the show progresses, you see her journey, moving up in the ranks from the streets of San Francisco to being the head of the San Francisco Human Rights Commission.

AX: Have you gotten to meet the real Cecilia Chung?

AQUINO: Absolutely. I was fortunate to meet her after filming Part Three, so she was kind enough to not only meet with me, but also have me shadow her in her work, so I could see first-hand how she was making a difference in other people’s lives, just through her daily work.

AX: When you’re first playing Cecilia Chung, is she already living as a woman?

AQUINO: In transition. The first glimpse you get of Cecilia in the show, it’s pre-transition. So I was very committed. I really had to release any notion of vanity or ego and just try to look as convincingly pre-transition as possible. And that was with the help of [the departments of] Hair and Makeup and just being disciplined about holding my jaw in a certain way and having my voice be in a certain place, and my mannerisms. So I was committed to showing that part of the transgender journey.

AX: Was that the most difficult part of playing her for you?

AQUINO: It was one of them. Because up to this point, just watching the show, it was a little tough for me to watch. Because that was part of me that I have moved on from. But for the story, for the project, I was willing to go there.

AQUINO: In the sense that we are close to our mothers now. Any parent wants the best for their child. I think one of the tricky things during transition is that a mother just wants her child to be happy, and their notion that maybe this [coming out as transgender] is a path that would not have them be happy, I think that’s what may fuel their apprehensions at first. But once they realize that this is something that is us [the child’s true nature], that it is something that is our seed and that it is just necessary to express ourselves authentically, and they realize that we have no other choice, then that’s when see that being supportive is the way to most have their child be happy. And Cecilia and I have that experience with our mothers, I feel.

AX: There is a scene where Cecilia’s mother accepts her and Cecilia says, “I always was your daughter.”Does that resonate for you?

AQUINO: Absolutely. Because when babies are born – this is something I learned reading, and there’s a current issue of National Geographic about gender – when the organs of the fetus develop into male or female, it is I believe in the first month or so of pregnancy, whereas when the brain develops into male or female, it’s in the latter half of pregnancy. So if there’s a different environment of hormones, or chemicals, or medication, or what have you, that’s when you can have a male brain, but not necessarily an anatomy that reflects that [or vice-versa]. So I learned about that, and pretty much, when a baby is born and they have the brain of a woman, their anatomy doesn’t necessarily reflect that, but a doctor proclaims them to be one gender. If it’s really not who they are, that’s when society sort of imposes that they be this gender. So I think transgender people are so strong because they are so sure of themselves, in terms of, “Okay, I am a woman.” And for them to go through what they go through just to live happy lives, I think it’s very admirable really, to be your true self. And at the end of the day, it can be a pillar of strength, if you’re surrounded by distractions of problems or anything that can you get you down.

AX: Although you are playing a real, still living person, did you have input into her as a character with WHEN WE RISE creator Dustin Lance Black?

AQUINO: Yes. Lance was very, very receptive. He acknowledged that it was a journey that I had experience in, so he would always ask Hair and Makeup, “Well, is she happy?” That was very touching, because he always, always asked for my input, including the part of pre-transition. Because initially we [were going to] see Cecilia sort of already beginning her transition, and Lance and I had a discussion that it would be more effective to show the transgender journey pre-transition. So then you really see her coming into her own.

AX: Can you compare the transgender community from when Cecilia came out to now, what some of the differences are – obviously, you’re too young to have been around in the ‘80s, but from what you know of that period?

AQUINO: Whatever different trappings there may have been, Cecilia had a support system, people that were part of the community that loved each other. And that’s the same now. If you have a strong support system and you love each other, then you really can get through anything. Especially if you believe in yourself, and in addition to that, you have people that are around you that support you, you can do anything.

AQUINO: My shoots were in Vancouver. Vancouver was gorgeous. I lived there for two months – it’s a city I could live in. I fell in love with it. The people are wonderful, very warm, and the city is just close to nature, and I love nature. So I really enjoyed it.

AX: Are you looking to play roles in the future where transition is not the main part of the character’s story?

AQUINO: You know what, this is actually my first trans role. I was playing cis-gender roles before this, because especially Shakespeare roles, the roles that were meaty and attractive to me in terms of an actress, were the Juliets and the Isabellas in MEASURE FOR MEASURE, and Lady M, who I would love to play one day, because they were complex, drawn-out characters. But we live in a time now where people are watching to see stories of transgender people. So it really is about the story for me. So yes, it’s about the story, it’s about the character, so I’m excited to play a cis-gender character that people can see, “Okay, trans actors are being given the chance to do that if they’re the best actor for the job, because there’s so much trans talent out there.” And for them to be given the chance to play multiple roles, I think that’s just as significant.

AX: Did you have primarily a stage career before this?

AX: And what would you most like people to know about WHEN WE RISE?

AQUINO: WHEN WE RISE is the best history lesson possible, because it covers the LGBTQ civil rights movement, but it also does so grounded in family values. People who just want to be close and maintain relationships with their families, be able to love who they want to love and have love themselves. So anyone out there who may not be part of the LGBTQ community, if they see this, hopefully they see a connection with the characters onscreen, because at the end of the day, we all want the same thing, and that’s human connection and to feel that we’re making a difference in this world.