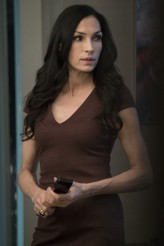 The EP/co-creator talks THE BLACKLIST spinoff 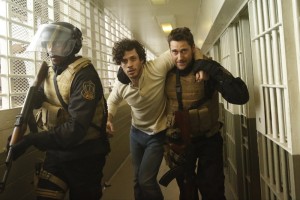 Jon Bokenkamp created THE BLACKLIST, which is now in its fourth season on NBC. The series deals with FBI profiler Liz Keen (Megan Boone) and Raymond “Red” Reddington (James Spader), a very bad guy who has come in from the cold with a list of worse guys.

Now Bokenkamp and John Eisendrath have created THE BLACKLIST: REDEMPTION, a spin-off that will take THE BLACKLIST’s Thursday-night slot on NBC for eight weeks. THE BLACKLIST: REDEMPTION follows Liz’s estranged husband Tom Keen, played by Ryan Eggold, a covert operative who teams up with Susan “Scottie” Hargrave (Famke Janssen). Scottie’s company Grey Matters works on cases that the authorities cannot legally address. Per Red, Scottie is also Tom’s long-lost mother, though she doesn’t know it yet.

ASSIGNMENT X: At what point in the life of THE BLACKLIST did you think, “We want to do a spin-off”?

JON BOKENKAMP: You know, we talked about it awhile. Like when John [Eisendrath] was talking about killing off Tom in Episode Seventeen of the first season [of THE BLACKLIST], there wasn’t a light bulb moment, but he was a character that we felt we couldn’t get rid of, because he occupied such a strange and unique place in the show. He wasn’t a cop, he wasn’t just a normal husband, and then when we started to see the undercover work he did, going to Germany and going undercover in a group of neo-Nazis, going from a schoolteacher to that character, it was like, “Wow, this might be kind of a fun guy to follow.” So it’s been some time that we have thought it would be a wild ride to follow him in his own universe, this more espionage-type world.

AX: Did that inspire the mood you’re going for with THE BLACKLIST: REDEMPTION?

BOKENKAMP: I think so, yeah. We had an opportunity to do something that’s a little more MISSION: IMPOSSIBLE, a little more ALIAS, a little more wild, and a little more heightened in a way. But it definitely is an undercover espionage show, which is full of big turns. Fans of THE BLACKLIST I think will enjoy that, and yet, I think people who haven’t ever seen THE BLACKLIST can pop in and see a new world that is just a great spy show.

BOKENKAMP: No, I think it’s been really fun. I think the change in tone has sort of taught me more about THE BLACKLIST, and yet we’re having a great time just trying to figure it out.

AX: Did the original BLACKLIST wind up being a little bit darker than you had imagined when you started it?

BOKENKAMP: Yes, and it’s funnier than I thought it would be, too, oddly. I mean, Spader has a very weird sense of humor that I never had in mind when we were starting to write the show, and he’s great at that, so yes, I’m continually surprised by how dark and bloody and weird it gets, but I also am completely blown away by the weird sense of humor that we’re able to draw out from Spader.

AX: Are you surprised/impressed that you’ve been able to keep James Spader on the show for all these years?

BOKENKAMP: Oh, dear God [laughs]. Yes. Spader’s fantastic. What’s funny is, the show has really expanded in terms of the rest of the characters on the show. One thing we’ve been able to do is explore the rest of the team. We’ve gotten to know characters like Aram [played by Amir Arison] and Cooper [played by Harry Lennix] and Ressler [played by Diego Klattenhoff] and Samar [played by Mozhan Marno], the different characters. That’s been a real joy, to get to know those guys, but yeah, James is – what do I say? He’s a weird dude and I love him to death. He’s fun to write for.

BOKENKAMP: Yeah. David Amann really is the show runner on REDEMPTION. We are there kind of guiding him and showing him what we think works about the show, or listening to him about what isn’t working, and it really has been an incredible collaborative process of just trying to find the voice of it. I haven’t done this many times, so it’s very unique, to be able to go out and do a movie every week, and to build and create a new world.

AX: Are we going to see any BLACKLIST people on REDEMPTION during the first eight episodes, or are you avoiding that to give it its own identity?

BOKENKAMP: Both. Yes, there are a few surprises, but for the most part, the show stands on its own. And we really want to create that world, land who those people are, those characters. We have a great ensemble that we’re writing to. In the very beginning of THE BLACKLIST, we were really writing sort of a Red/Liz dynamic. As time has gone on, as I’ve said, we’ve expanded that world, but here [on THE BLACKLIST: REDEMPTION], Adrian Martinez and Edi Gathegi and the [rest of the] cast, we really are starting this with more of an ensemble feel than THE BLACKLIST ever was. So yeah, it’s great to write for.

AX: And what would you most like people to know about BLACKLIST: REDEMPTION and THE BLACKLIST?

BOKENKAMP: I’d like them to know that REDEMPTION is its own recipe, its own special sauce, its own show, and that fans of THE BLACKLIST will find little strings and surprises, but somebody who’s never seen the show can drop in and have a blast, because it really is a wild ride. It’s a big, fun, crazy world that we’re painting.

This interview was conducted during NBC’s portion of the winter 2017 Television Critics Association (TCA) press tour at Pasadena’s Langham-Huntington Hotel.