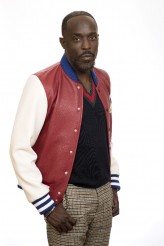 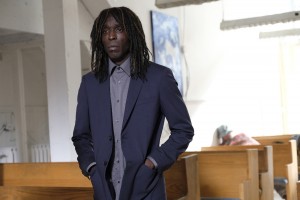 Michael Kenneth Williams has a wide-ranging career that encompasses everything from his Jazz Age gangster Chalky White in BOARDWALK EMPIRE to a heroic resistance fighter in THE PURGE: ANARCHY to the husband of Queen Latifah’s Bessie Smith in BESSIE, a performance that earned Williams an Emmy nomination.

With his coworkers, Williams does Q&A panels for both shows. At ABC’s panel for WHEN WE RISE, he praises what series creator Dustin Lance Black has to say and adds, “Right now, at a time when, from my perspective, I see a very divided country, a country in pain, a nation in pain. And we need to be reminded that there are a lot of stories of triumph, of courage that this country was built on, and WHEN WE RISE is truly one of them. It’s a great time to tell the story to infuse pride again in just being Americans and celebrate our diversity, our differences and our unity.

“Our next generation, we haven’t taken enough time to filter our stories of triumph down so that kids can feel more pride about our country. We need that now more than ever. And WHEN WE RISE, I believe, is an antidote to a lot of the rhetoric that’s happening right now. We can see something that, from our past, our ancestors, our forefathers fought and died for the liberties that we have now. I think it’s an inspiring story to tell, infused with pride across all bases, not just for the gay community.”

At Sundance TV’s panel for HAP AND LEONARD, Williams relates that he and James Purefoy found their roles to be a little more challenging than expected at first. “Getting to know these characters in Season 1, it wasn’t as easy as we thought it was going to be. I don’t know if anybody knows – James and I, we have a friendship that goes back several years. Me, him and his wife, over a bottle of wine, we would have open discussions, much like Hap and Leonard would, about  life and politics, religion, whatever the topic of the day. And we can just bring that into Hap and Leonard’s world. And we found it wasn’t quite that easy. There were still a lot of things that he and I had to work through within the relationship of these two guys. Thank God we had our relationship to fall back on, because it made the process so much easier, be we had to find these two men’s voices on their own. Once we did that, it made Season 2 a much smoother process, I believe.”

Although Leonard and Hap find themselves on the wrong side of the law, Williams feels that they are ethical people. “Make no mistake, it’s told through comedy, but Hap and Leonard, I believe, have a very clear moral compass as to what is right and wrong, and what they’re willing to get their butts kicked for. And that’s in the writing. And I think that’s what James and I bring to the characters, the level of honesty and humanity, mixed with the writing, is a no-brainer to not see the dignity in these guys, even for the country bumpkins as they may appear to be.”

Williams then obliges with some follow-up conversation at ABC’s party for the Winter 2017 Television Critics Association (TCA) press tour.

ASSIGNMENT X: Between Leonard Pine and Ken Jones, did it strike you that you’d cornered this kind of unique character niche?

MICHAEL KENNETH WILLIAMS: [laughs] Let’s just say I had some concerns. I called [my manager] when that revelation landed. I was like, “They’re already questioning my sexuality [after Season 1 of HAP AND LEONARD]. Now I’m really going to be in trouble after this.” I don’t know why it turns out like this, but I don’t hesitate to tell the truth, to tell a slice of life, to be a vehicle, to be a vessel. I don’t hesitate. I don’t care how misunderstood or unpopular the lifestyle may be. If there’s a human being that lives and acts and feels this way, I as a thespian, it’s my duty if I’m called to do it, to do it. And do it with empathy and humanity.

AX: Can you talk about the similarities and/or differences between Leonard and Ken?

AX: Ken has a horrible incident as a young man, when he’s still being played by Jonathan Majors, where he’s in the Navy and forced to carry out an order that causes the death of his lover. At the time you’re playing Ken, is he still full of questions and guilt about the death of his lover, or has he made his peace with God about that?

WILLIAMS: No, no. When my version of Ken Jones is introduced, he’s still very much plagued by the guilt, survivor’s guilt, and also having indirectly something to do with the love of his life being murdered. He was forced to give the call. There’s a major guilt there.

AX: Does Leonard have any single guilt that you think affects him like that, or is he more just hardened by cumulative experience?

WILLIAMS: With [HAP AND LEONARD], these seasons are standalones, because they’re based on books [by Joe Lansdale]. So this new season, we get to see Leonard in a different light. In Season 1, he’s very angry, he’s jaded, he’s bitter, but this season, he finds love. And it’s not the kind of love that you may think it is. It’s platonic and it’s innocent and it’s sexless, but it’s pure love at its most primal place, because it’s nurturing. It’s a nurturing love, and he finds that in another human being, and through that, he gets to explore the love that Uncle Chester had for him, the misunderstood love that his uncle had for him when he was growing up as a child. And you get to see him come to terms and find and make peace with the fact that his uncle did indeed love him. Uncle Chester he died in Season 1. And what happens in Season 2 through Leonard’s new love, he gets to understand the love of his uncle. It’s a beautiful relationship.

AX: What would you most like people to know about WHEN WE RISE?

WILLIAMS: I would like people to know that, in my opinion, WHEN WE RISE, at its core, is a love letter. It is a love letter to everyone who has fought for equality, diversity, freedom.