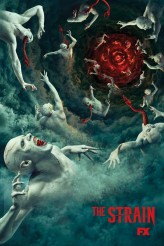 THE STRAIN: Carlton Cuse talks about the series finale – Interview 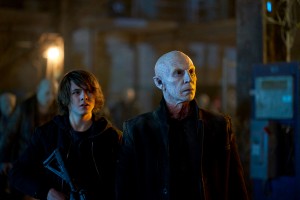 THE STRAIN wraps up its four-season run on FX this Sunday, September 17. Created by Guillermo Del Toro and Chuck Hogan, based on their trilogy of novels, THE STRAIN tells of an infectious strain of vampires, the strigoi, led by an extremely powerful Master, who can jump from body to body. Near the end of Season 3, the Master had taken over the body of billionaire Eldritch Palmer, played by Jonathan Hyde, who had been financing the vampire’s world conquest for his own (now thwarted) reasons. The Master is opposed by a small but dedicated band of humans. Dr Ephraim Goodweather (Corey Stoll), one of those humans, is highly conflicted, since his young son Zack (Max Charles) seems to willingly be staying with the Master. There’s also the matter of Zack, in a fit of rage, setting off a nuke that obliterated most of New York.

THE STRAIN executive producer Carlton Cuse, who has been with the series since its inception, gets on a conference call to talk about the end of the run. Cuse is familiar with bringing series to a planned conclusion, having more or less pioneered that technique with Damon Lindelof on LOST. Cuse’s series BATES MOTEL also saw its finale earlier this year, after a five-season run.

On when it was decided what THE STRAIN’s finale would be, especially when it was clear that it would diverge from the metaphysical nature of the novels:

CARLTON CUSE: I think it evolved across time. You make a television show, and the more time you spend in that creative world, the more you learn about the world, the more you think about the world, the more the characters evolve. It’s one of those things where I think pieces of the ending kind of arose across time, but I would say that during Season 3, Chuck and Guillermo and myself all looked at the amount of narrative that we felt we had left, and we felt like one more ten-episode season was the right amount of time to end the show and, especially in concert with Chuck and the other writers, when we sat down to plot out Season 4, the thing we really focused on at the beginning was what our ending was going to be. As I said, we’d already had certain ideas about what characters would be doing and where they would be going, but it was really at the very beginning of Season 4, in the writing process, that we figured out what our ending was going to be, and then we wrote towards that, and that was very exciting. It’s wonderful to be in a position to determine the ultimate fate of your characters.

On other differences between the FX series and the novels:

I think the thing is, most importantly, if you’ve read the books, the show is its own animal, and it has its own narrative journey, and so I don’t think you can watch this final season of the show and think you know what’s going to happen to any of the characters. All bets are off. We allowed the television show to be its own creation, so if you’ve read the books, don’t think that you know what the fates of the characters are. The ultimate thing about the last season of the show is, you get to find out what the ultimate fate of these characters is. And that’s very exciting. 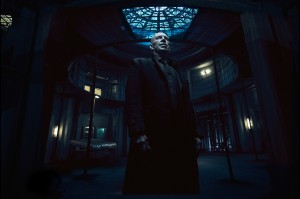 On the relationship between Zack and the Master:

At the end of Season 3 that Zack and the Master have gone off together, and that is kind of a mentor/mentee relationship. Zack is hopefully one of the evil-est child characters in the history of television, and who better to mentor him than a giant parasitic vampiric creature? Ultimately, I think that’s the ultimate question for [Zack] is, really, does what he did have some deeper resonance? Is he moved or has he been changed by that event [detonating the bomb], and ultimately, where is that going to lead him? I think the question for Zack really is, is that character ultimately redeemable? As bad as he is, is there still some shred of humanity left inside of him? And that question gets explored in great detail as the season goes along.

On whether the Master wound up taking over Eldritch Palmer’s body because it made sense for the plot, or because the producers though actor Jonathan Hyde would make a great, scary Master:

The honest answer to that question is a combination of both things. No one makes a successful television series in a vacuum, and if Jonathan Hyde wasn’t as outstanding as he is, we probably wouldn’t have done it. That said, as we were talking about the narrative over the seasons of the show, it became pretty clear to us that that was a really interesting, logical progression of where the Master would end up, and it seemed particularly delightful because of how annoying it would be for Eichhorst [the Master’s vampire henchman, played by Richard Sammel], and ultimately, Palmer as a character combining his innate human evilness with this evil parasitic creature felt like we wouldn’t be able to do much better than that. The answer is, it’s really both, but it required not just the conceptual idea, it required also a conviction that the actor was extraordinary and would be able to really pull it off, which Jonathan absolutely did. He reveled in it. It was great. It was a really fun thing.

On whether Cuse has a favorite STRAIN character to write for:

That’s a very tough question. That’s a little bit like asking someone to choose the favorite among their children. I really love them all. I would say, though, that in some ways it’s always more fun to write antagonists than protagonists, because of their lack of morality and their unpredictability. So I think Eichhorst is really fun, because he’s loyal and dutiful, but he’s also petty, and I think there’s this really delightful – to see him be this really scary force of evil, but also to be highly annoyed when other characters seem to be getting stuff that he doesn’t get and things like that. I really love all the characters, but that would be the best I can do for you.

On Guillermo Del Toro’s creative participation in the final season:

Guillermo remains a wonderful collaborator and, as always, Guillermo remains in charge of the creatures and visual effects and the color timing and really the look of the show, particularly this season, when our characters are living in nuclear winter. That was all guided by Guillermo. Unfortunately, he was directing this movie, THE SHAPE OF WATER, and therefore was not available to do any directing this season, but he has remained very much involved in the visual creation of the show, and also, it’s very much his talent and provided narrative input, particularly as it relates to the ending of the show. That’s something that Chuck and Guillermo and I all discussed in a lot of detail. 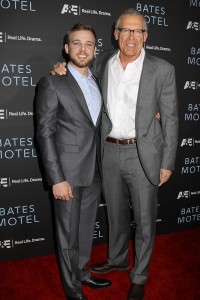 On the themes of THE STRAIN Season 4:

The ultimate overall goal is to try to defeat the Master. Our characters may be down, and they may be living in nuclear winter, and they may no longer be at the top of the food chain, but they are still determined to defeat the forces of evil. That’s ultimately what the story’s about. At the beginning of the season, we’re starting out more in survival mode, but in the case of Fet [Kevin Durand], he’s out running around in the Midwest, trying to get a nuke, and he’s trying to get a nuke because he believes a nuke is the thing that’s going to be able to bring the Master down. So our characters may be very disadvantaged at the start of the season, but they still have this larger goal of ultimately conquering this horrible parasitic force.

On guiding a series toward a planned conclusion:

When we did LOST, LOST was the first time in the history of television that someone was able to negotiate an end date to a network show. That was just unheard-of. Network shows would just go until they ran out of gas, but negotiating a conclusion while the show was still very successful was something that hadn’t been done before. So the challenge is obviously to know how to end a show well, but I think you ultimately really have to rely on your heart and your gut and think about what is it that the audience is expecting, and what are really the unresolved issues of any given show. In the case of BATES MOTEL, [fellow executive producer] Kerry Ehrin and I always saw that as this kind of wonderful romantic tragedy, and the ROMEO AND JULIET metaphor of, how could these characters be together, and ultimately only in death can they find their place with each other was something that we thought about very early on, and worked towards.

In the case of THE STRAIN, it’s this larger than life, graphic novel epidemiological thriller, and there are these very larger than life forces of antagonism, this Master and his parasitic minions, and all of these wonderful good-guy characters that are trying to bring him down, so I think the right and proper ending is one that leads to an ultimate conflict between those forces, and tells us what the fate of the characters will be, so that’s what we set out to do with this final season. It’s kind of great, because there’s no more stalling around, there’s no – everything is very definitive this season. You get to see what the fate of each of these characters ultimately is.