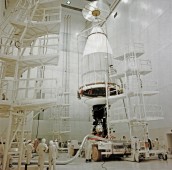 Voyager Encapsulation from THE FARTHEST – VOYAGER IN SPACE | ©2017 PBS

As their surnames suggest, the Doctors Spilker are married to one another. Linda Spilker wears a ring, designed by Tom Spilker in honor of their twentieth wedding anniversary that depicts Saturn surrounded by its rings.

ASSIGNMENT X: Did you meet while working on the Voyager project, or did you already know each other?

TOM SPILKER: No. We met after the Voyager project.

LINDA SPILKER: We were both working at JPL, and we met after Voyager had ended for both of us. We both worked on Voyager through the Neptune fly-by in 1989, and then we didn’t meet and get married until 1997. We have a lot in common.

AX: What was your role on Voyager?

LINDA SPILKER: I worked on Voyager as the experiment rep for the Infrared Instrument. That just meant I was the interface between JPL and the science team. I really had a lot of fun with that. I had just gotten out of college when I started at JPL, and I learned so much about what Voyager was doing, and really, really enjoyed that opportunity, and actually used Voyager data to write my PhD thesis. I went back to UCLA, used Voyager data of the occultations of the rings, watching as a star goes behind the rings. So I feel really a connection, since I used that data for the next step in my career.

AX: What did the data illustrate?

LINDA SPILKER: For the rings [of the planets], it showed an incredible amount of detail. We [originally[ thought the rings were just these bland sheets of material, and instead, there were all of these different structures, these features in the rings, down to a hundred-feet resolution. It was tremendously exciting to go from one idea that was wrong to seeing something up close in such detail.

AX: Are there elements in the rings that we would find here on Earth, or are they particular to Saturn?

LINDA SPILKER: It turns out that all four of the outer planets have rings – Jupiter, Saturn, Uranus and Neptune all have ring systems, and the rings are made of individual particles, millions of them, that orbit around Saturn. They bump into each other, and they create these beautiful waves and beautiful structures. The Earth doesn’t have a ring, and the moon doesn’t have a ring, so it’s really something unique. But what’s neat about the rings is, they’re an analogy for the disc from which the solar system may have formed. So understanding how the rings work might tell us how planets formed around our sun.

The particles in Saturn’s rings are mostly made of water ice, ninety-nine percent water ice. So you’d find that in your freezer as ice cubes. There’s only a little tiny bit of material [in the rings] that’s not ice. We don’t know for sure if it’s silicates, or maybe organics, or iron, or exactly what it’s made of, but the rings are everyday material, water ice.

AX: Do you know why some planets have rings and some don’t?

LINDA SPILKER: It looks like all the giant planets have ring systems, but the inner planets are probably too small to hold onto the particles you’d need to make a ring. In the case of the Earth, since we have a great big moon, it would kick out any ring particles that tried to circle around the Earth.

AX: So it has to do with the gravitational pull of the planet, and the smaller planets don’t have enough gravity to make rings?

LINDA SPILKER: Right. Although what’s interesting is, we found an asteroid, or actually it’s what we’d call a trans-Neptunian object, a TNO, it’s like an asteroid, but further out in the solar system, and here’s this body, Chariklo, a little tiny thing, that has two rings around it. So you never know what can get a ring or not.

AX: Both Voyager I and Voyager II launched in 1977. What years did the Voyager project encompass for you?

LINDA SPILKER: I think the mission first got started, building the spacecraft in 1972. Voyager flew by Jupiter, both of the Voyagers, in 1979, two fly-bys of Saturn 1980, 1981, a Uranus fly-by in 1986, and a Neptune fly-by in 1989, and I have two daughters and I tell them that their births are based on the alignment of the planets, because there was a five-year window between the Saturn fly-by and the Uranus fly-by, and so I, like a lot of moms on Voyager, started their families and had their families in that five-year window.

AX: What sorts of things are we learning from Voyager?

LINDA SPILKER: Well, some of it, by understanding the weather on these other planets – they’re simpler, they don’t have a solid surface, they’re mostly just gas, hydrogen and helium. And then, like I said, for the ring systems, like at Saturn, studying and understanding how the ring particles interact, how they form bigger particles, can tell us something about how the planets formed in the early solar system. So that’s going back a ways, but that’s something. And also, two of the moons that Voyager observed up close, Enceladus at Saturn and Europa at Jupiter, have liquid water oceans underneath their icy crusts. And we wonder if there might be life in those oceans. So Voyager started this incredible progression of our search for knowledge, to try and answer questions that led to missions like Galileo and Juno and Jupiter, Cassini in its orbit of Saturn. I now work on the Cassini mission – I’ve been with Cassini for almost thirty years.

The giant planets are just mostly a giant atmosphere, and then as you get deeper into the planet, the atmosphere compresses, until the hydrogen becomes a liquid. It gets so much pressure, like a million atmospheres’ pressure, the hydrogen becomes a liquid. So there’s no solid surface, like the Earth has. There might be a little rocky core right in the middle, but no surface we could stand on if we went to a giant planet.

LINDA SPILKER: Right. We don’t see the core, it’s too far down and it would be too hot, and you’d be crushed before you ever got to it.

AX: And this is why Cassini is going to crash into Saturn, because the spacecraft can’t actually land on it …?

LINDA SPILKER: But you could land on the moons. The moons are made mostly of water ice, just like the rings, and you could go back and land on one of the moons in these places.

AX: And is the water actually like water here on Earth?

LINDA SPILKER: It’s exactly like the water [on Earth]. It’s water ice, the same thing that we think of that we have here on Earth. H2O. Exactly the same.

LINDA SPILKER: I think that tells us that the cloud from which the sun and the planets formed was basically the same material, and so whether you’re at the Earth or further out, all the way out to Pluto, it’s the same water, the same H2O. There’s a lot of water in our solar system, and as you go further from the sun, that water doesn’t have a chance to evaporate, so it can freeze into the moons in the outer solar system. In the outer solar system, water ice is kind of the rock. It gets frozen solid, hard as a rock, and then you start to get interesting things like, one of the moons around Saturn, Titan, has liquid methane in lakes and seas at its north pole. So pretty soon, it gets really cold, water ice is a rock, but then these other things can condense and become a liquid, so that’s really intriguing, too.

AX: Are any of the Voyager project workers actually STAR TREK fans who call it “V’ger,” as it is referred to in STAR TREK: THE MOTION PICTURE?

LINDA SPILKER: [laughs] I don’t call it V’ger, but I love that movie, and in fact, I have a fun story. Some friends of mine went to see it and I had no idea what it was about. So they told me, “You have to go see this movie.” So I went to see it, and we got really good seats toward the front, and I hadn’t figured out it was Voyager until the very end, and as they’re walking down the steps and there’s the Voyager spacecraft, all my friends are looking at me to see what I would say when it turned out, here’s Voyager. “Oh, my gosh.” I was totally shocked. I love this movie.

We don’t call it V’ger, we call it Voyager. But we think of Voyager very fondly, and there’s a special place in my heart, since Voyager is the first mission I worked on right out of college. To think that it’s still going strong, still out there – Voyager II is in interstellar space, and it’s amazing to think about that. It is actually out in the material between the stars and going strong. I’m very proud to have worked on Voyager.

TOM SPILKER: It’s a thing called an ultra-stable oscillator. They generated these as part of the post-World War II technology development. You can make something that will make the frequency of a radio transmitter, using one of these ultra-stable oscillators as the reference, make that frequency exquisitely stable, and so that you know this is exactly what frequency this spacecraft is transmitting. And so you can measure things like Doppler shift, which tells you about the gravity of the thing that it’s flying by. You can also, when the signal is going through the atmosphere, measure how much that atmosphere changes the frequency.

AX: What do the signals tell you?

TOM SPILKER: We use the radio waves – the way they propagate, the way they travel through things like atmospheres – we send the spacecraft such that it goes behind the planet as seen from Earth, and just as it’s going behind the planet, those radio waves are traveling through the planet’s atmosphere to get to Earth. We look at how that atmosphere changes those radio waves, and we can tell all kinds of things about that atmosphere – how much atmosphere is there, what its pressure is, what its temperature is, what chemical species in some cases are in that atmosphere, like ammonia. We’re very sensitive to ammonia, so we can make those measurements that none of the other instruments can make. And then there are other experiments that we can do with a radio signal that will tell us, how much does this planet weigh, how much does this moon weigh, how much mass is there? And it gives us a very, very accurate measurement of how much stuff is in that planet, or how much stuff is in that moon. It goes back to figuring out where the solar system came from. Knowing those things is very important for that.

This interview was conducted during PBS Nova’s party for the summer 2017 Television Critics Association (TCA) press tour at the Beverly Hilton Hotel.