The actress talks about all her new projects 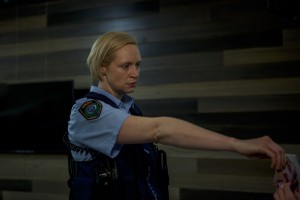 Gwendoline Christie is an actress who causes the hearts of genre fans to soar. In GAME OF THRONES, she is the principled, imposing warrior Brienne of Tarth. Christie’s Captain Phasma character, introduced in STAR WARS: THE FORCE AWAKENS, is the first female Imperial officer in the STAR WARS films; we may learn more about her in the upcoming STAR WARS: THE LAST JEDI.

Now Christie, who hails from Sussex, England, costars in a very different type of role in TOP OF THE LAKE: CHINA GIRL, which airs on SundanceTV Sunday through Tuesday, September 10 through 12. Created by Jane Campion and Gerald Lee, the new miniseries is a follow-up to 2013’s TOP OF THE LAKE. Elisabeth Moss’s police detective Robin Griffin is now back in Sydney, investigating the death of a prostitute. Christie’s character, Miranda Hilmarson, is a police officer who demonstrates a sense of hero worship towards Robin that makes the detective uncomfortable.

During Sundance TV’s portion of the summer 2017 Television Critics Association (TCA) press tour at the Beverly Hilton Hotel, Christie talks about all three of her projects.

ASSIGNMENT X: Obviously, you can’t say anything about the plot of STAR WARS: THE LAST JEDI, but can you talk about how you feel about getting to know Captain Phasma a little better as a character in the new film?

GWENDOLINE CHRISTIE: I was just so delighted to be in THE LAST JEDI, and for that to be directed by Rian Johnson, who is another director I’ve long admired, since I watched BRICK, actually. I thought that was a really brilliant piece of work. And when I met him – these are huge things to me, things that I never thought would happen in my career. So when Rian invited me to read the script, have my thoughts and then come and discuss it with him, as he did all of the cast members, I was really thrilled to have an opportunity of a forum where I could put my ideas forward and have some back and forth about what, where we felt things were and where we felt they could go. What I can tell you about the next STAR WARS film is that I think Rian does an exceptional job of going deeper, of going further, and really exploring what these relationships are.

AX: Not that Brienne of Tarth isn’t a remarkable character and not that being part of cultural history with STAR WARS isn’t amazing, but with TOP OF THE LAKE: CHINA GIRL, is it enjoyable as a performer to get to spend a little more time working on the character versus having to deal with the technicalities of a lot of visual effects?

CHRISTIE: Well, I was just really delighted to have a bigger role. That’s what I’m hoping TOP OF THE LAKE will do for me, is that it will show my capacity as taking on larger roles and particularly more complex roles. That was always what my interest was when I was training, and throughout the twelve years now since drama school, [which] feels like a thousand, but that’s really been where my heart is, is exploring complicated human beings. When I first started on GAME OF THRONES, around 2011, I remember reading the books and thinking, “Gosh, these are really unconventional narratives, and it’s so fantastic that these women are at the forefront. I’m sure when it comes to the TV show, they will reduce those parts, because traditionally, it is the men who are at the forefront.” And when I saw that was not what happened, they maintained that, I was really heartened. And I feel that that has been something of a platform which has encouraged a greater popularity of women to be at the forefront of mainstream drama, and with great, great storytellers, like Jane Campion.

I feel like we get to see a different side of life. I’ve always been interested in exploring the darker recesses of humanity, but to play someone truly complicated, where I don’t think we’ve really seen a character like Miranda before, because she’s such a mass of chaos and conflictions, and she’s quite out of control. Also, what’s amazing about Brienne of Tarth is that she is an outsider who is abused and maligned for the way that she looks, and she overcomes that obstacle. Here we have a woman that doesn’t overcome that, and actually, that is probably more the reality that many of us feel in life, and so to explore that reality, I hope to give it more light, to expand people’s ideas of empathy and about what prejudice is. 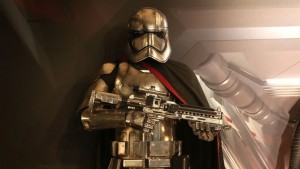 Gwendoline Christie as as Captain Phasma in STAR WARS: THE FORCE AWAKENS| ©2017 Lucasfilm

AX: Was Miranda’s police officer uniform sort of a relief for you after wearing armor for Brienne and Phasma?

CHRISTIE: Yeah, I was definitely pleased to have a break from armor, as armor has been a focal point in my working life for some degree of years now. But really, what I wanted was, I really wanted to work with Jane Campion, I really wanted to play a role that was very, very different for me. And in it being different, it would mean that it would stretch me. I really wanted to be stretched as an actor. I really wanted to utilize acting muscles that I hadn’t used for a long time, not since I was at drama school. So I felt what Jane did was very interesting, from my perspective – I’m not convinced it was hers – which is that she created a character who is a police officer, so again, she is a woman who is a law enforcer of sorts, and extremely pale in TOP OF THE LAKE as well, but I feel that it subverts those things. Instead of the character being incredibly strong, having an incredible moral compass, of being able to somehow transcend any obstacle, this is a woman that is intensely vulnerable, extremely raw, making decisions based on an emotional basis that often results in complication, and who ultimately is sort of failing at life, and not having a life that is successful and functioning well, to the extent that she doesn’t have strong, functioning relationships with the people around her, if many relationships at all. 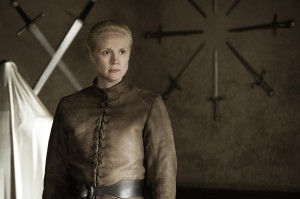 AX: What would you most like people to know about TOP OF THE LAKE: CHINA GIRL?

CHRISTIE: That it is a truly complex series, which I feel even transcends the traditional television format, and subverts the very nature of what a TV show is. It explores issues that we’re not used to exploring, in terms of misogyny, femininity, motherhood, what it is to be a woman, rape culture. It explores many, many, many different aspects, and human relationships of different sorts. I was so thrilled that one of the central themes is this relationship between two women, and how that evolves, for me. And I can’t wait for you all to see it, because really, it exists in its entirety rather than in an episodic format.